In more than 900 hours of recordings from wild chimpanzees, researchers heard hundreds of unique phrases that could resemble a language. 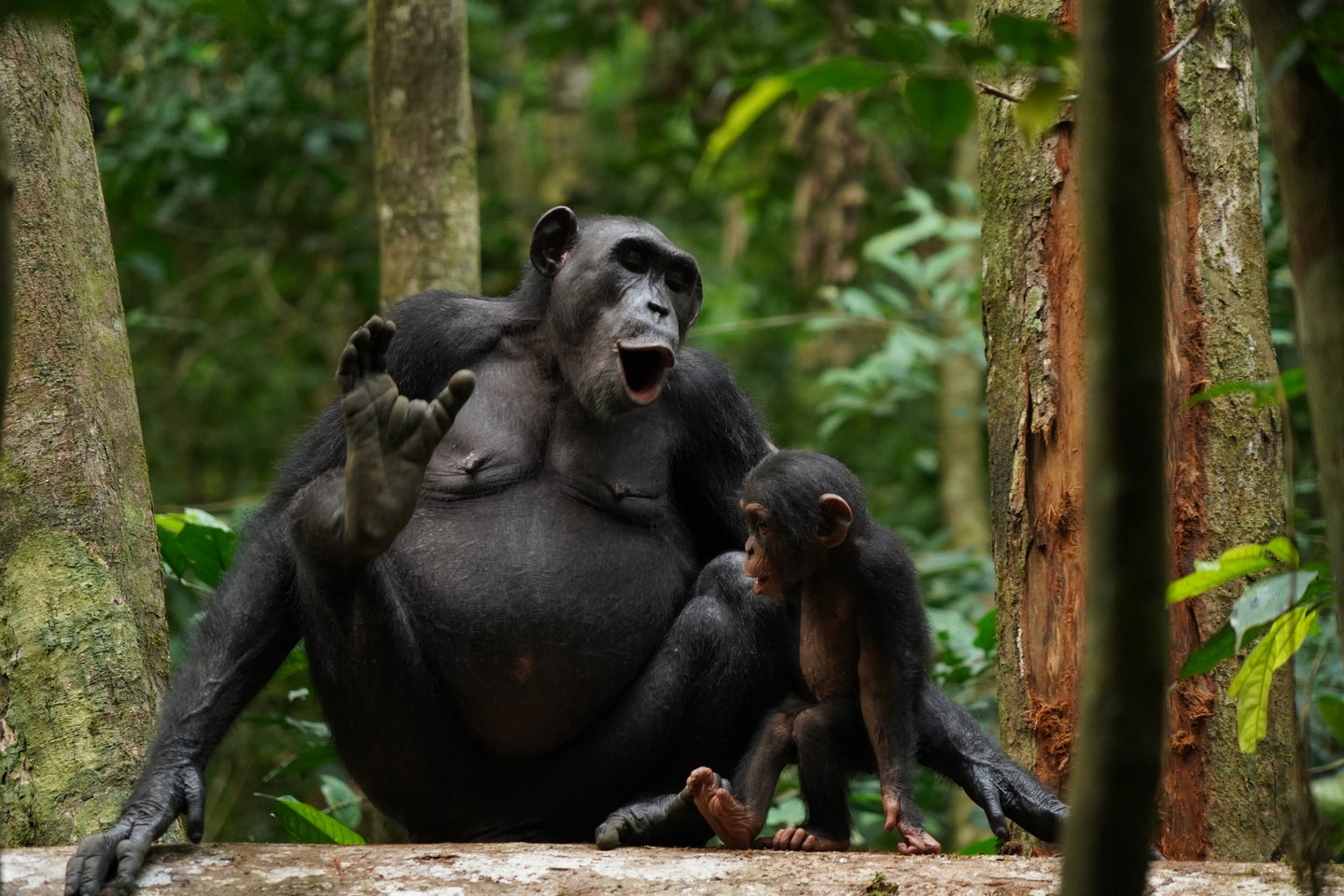 Chimps string together hoots, grunts, and screams in ways that might have complicated meanings. Liran Samuni / Taï Chimpanzee Project.
SHARE

Chimpanzees howl. They squeak. They bark. And sometimes, they scream, then grunt, then bark, and then scream, all in a row.

And according to a study published today in the journal Communications Biology, that series of expressions might carry its own meaning, almost like a chimp phrase.

Over the course of 2019 and into 2020, Tatiana Bortolato, a PhD student from the Max Planck Institute for Evolutionary Anthropology in Germany, spent dawn to dusk following and recording 46 adult chimps in Taï National Park in Côte d’Ivoire. After capturing 900 hours of primate sounds, she and colleagues from France and Switzerland sat down to pick apart the structure of those calls.

Biologists previously knew that chimpanzees build their calls out of a handful of distinct sounds, almost like letters: grunts, hoos, barks, screams, and roars. They can either spit out a single noise, or “pant” a string of them, inhaling between each beat. The pants are used to communicate through the jungle, making them particularly tantalizing for people trying to understand chimp talk.

To figure out whether the primates were stringing together intentional phrases in their pants, the team of linguists needed to figure out if certain sequences showed up more than they would by pure chance.

As it turns out, chimps are particularly fond of a few combinations: hoot-pant-grunt, hoot-pant-hoot, and pant-hoot-pant-scream. Sometimes, they combined two separate “units” into much longer phrases—two-thirds of the primates were heard belting out five-part cries. By combining the letters, the chimps had roughly 400 calls in their vocabulary.

It’s possible that the study missed even more subtle building blocks of calls because chimps use calls that superficially sound similar to people, but appear to be used in a wide range of situations. For example, it’s possible that a hoot in response to a predator has a subtly different tone than a hoot for a meeting between relatives.

Bortolato and her colleagues also didn’t figure out what the phrases they recorded meant. It’s possible that the order of the sequences matter, however: Certain chimp sounds tended to come at the beginning of phrases, while others were always placed at the end.

But even without a simian Rosetta Stone, the mix-and-match nature of the calls is the foundation for a more complicated vocal system that resembles a language. If a chimp can only make six sounds, it’s not going to make a great conversationalist, even for other members of its kind. (Adult English speakers tend to have tens of thousands of words at their disposal.) This study shows that chimps have the vocal repertoire to convey something meaningful.

[Related: What scientists learned when they tried to raise a chimp with a human baby]

So far, chimps have the most modular vocalizations out of anything studied in the animal kingdom. A few other primates—like the indri lemurs of Madagascar—combine notes into couplets or triplets. And the rock hyrax, a tiny, rat-like relative of the elephant, can fiddle with the order of sounds in its call. But chimps and humans are, for now, the only ones able to add to their playlist and shuffle it at the same time.

The next step in understanding whether chimps have what we would understand as “language” would be figuring out whether they organize phrases into what are called “hierarchical structures”—in the way humans assemble words into clauses, and clauses into sentences. As the Communications Biology authors point out, deciphering even a single call from another species is a massively time-consuming process. If animals are speaking in clauses, we just haven’t been able to catch them.