It's like having an "imaginary meal", the researchers say 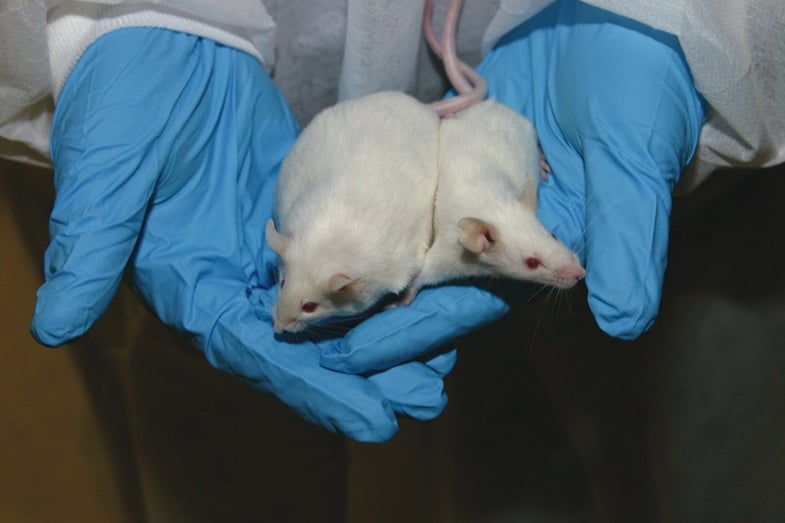 Safe and effective weight loss doesn’t yet come in a pill, but maybe one day it will. A new study has found a chemical that keeps mice from gaining weight through overeating. The drug also seemed to protect lab mice from some of the harmful effects of obesity: When researchers measured the mice’s blood, they found reduced levels of insulin, cholesterol, and other molecules, compared to obese mice who didn’t get the drug.

The chemical the mice got is called fexaramine. It sticks to any part of the body that has farensoid X receptors, or FXRs. Fexaramine flips FXRs “on,” which in turn triggers lots of bodily reactions, including some processes that are important to digestion. In the study, fexaramine seemed to make the mice’s bodies think they’d just eaten a large meal, prompting it to start burning fat. That’s why, researchers said in a statement, taking fexaramine is like eating an “imaginary meal.”

“It sends out the same signals that normally happen when you eat a lot of food, so the body starts clearing out space to store it. But there are no calories and no change in appetite,” said Ronald Evans, a biologist at the Salk Institute for Biological Studies and the fexaramine study’s lead scientist.

Evans and his team hope to get approval for human volunteers to try taking fexaramine. At such an early stage, it’s hard to know whether it will ever work in people. Regardless, the study offers valuable insight into how FXRs work. Researchers all over the world have been studying FXRs for more than a decade now, trying to understand their crucial roles in digestion and weight changes. Recently, a different team of biologists found that having functional FXRs is important for weight-loss surgery to work. That research still awaits confirmation as to whether the same thing is important in humans. Meanwhile, the new study offers more evidence for a new idea: That weight-loss surgeries work not because they shrink the size of the stomach, but because they alter many aspects of digestion, including how much bile the body makes and how the body triggers its FXRs.

Pharmaceutical companies have made a number of drugs that work on farensoid X receptors, but those drugs can have lots of side effects. That’s because the receptors are found in so many different places—including the liver, kidneys, and adrenal glands—that the drugs end up turning on more processes than you mean to. Evans and his colleagues tried to mitigate that problem by developing fexaramine in such a way that it mostly stays in the stomach and intestines after mice eat it. Unlike many drugs, it doesn’t readily enter the bloodstream. Keeping fexaramine in the intestines means triggering only the FXRs in the intestines, where it’s thought the receptors kick off the series of reactions the body normally goes through when digesting.

Evans and his colleagues published their work today in the journal Nature Medicine.