BlueCruise is smart, sophisticated, and user-friendly—but don't call it autonomous. 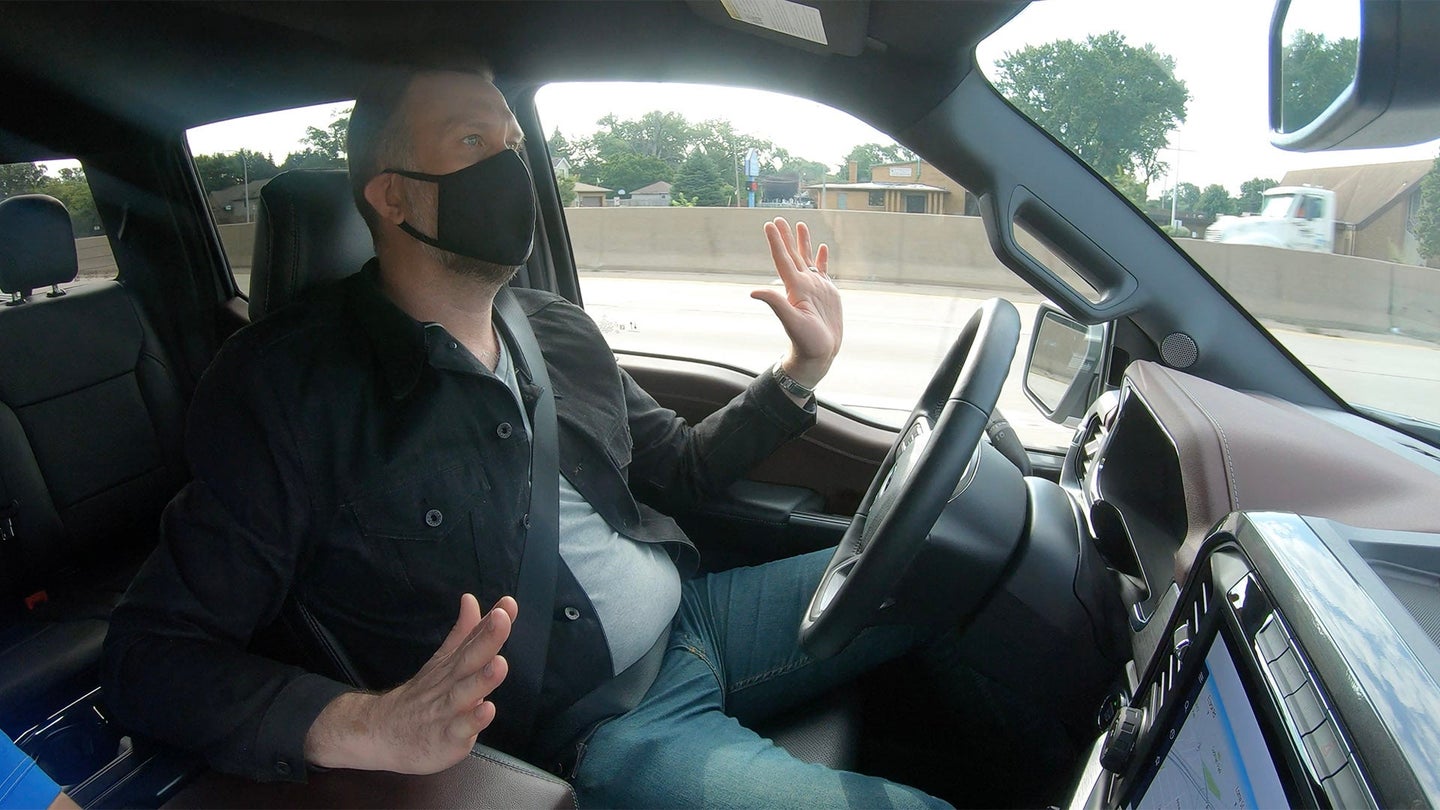 No personal data is saved with the Blue Cruise system, adding a nice security element to an already forward-thinking feature. Ford
SHARE

Rather than inching up on anything using the word “autonomous,” Ford’s positioning for its ready-to-launch BlueCruise seems to be an exercise in understatement. Making smart use of its already available suite of driver-assist technologies, BlueCruise is essentially a sophisticated takeon adaptive cruise control and lane-keeping. The Ford “hands-free highway driving technology” allows for unfettered driving on some 100,000 miles of “prequalified” divided lane highways throughout the US and Canada.

An event to test drive the system, near Ford World Headquarters in Dearborn, Michigan, was equally low-key. Some of the engineers and product planners responsible for the tech loaded me up intoa BlueCruise-equipped F-150 in about 10 minutes. Ford’s Shane Larkin, Supervisor, Driver Assist Advanced, rode shotgun to give me the lowdown.

Basically, BlueCruise’s sensor array is a techy cocktail of GPS maps, a high-mounted, front-facing camera, and a front-bumper-mounted radar sensor. The GPS data serves as a general positional reference, while the camera reads lane markings and scans surrounding traffic, and the radar handles forward vehicle tracking.

In the cabin, a camera in the upper corner of the center stack tracks eye and head movement to ensure the driver is keeping their eyes on the road. Infrared lights mounted to the left and right of the driver help eye-tracking in dark conditions (and through sunglasses). And while the camera tracks your eyes, it won’t record you picking your nose. “There’s no data saved,” said Larkin. “Nothing leaves the camera module.”

In practice—and, it should be noted, practice on a public highway loop in Ford’s backyard—BlueCruise is a straightforward thing to switch on and use. Activate the advanced cruise control system by way of the left control cluster on the steering wheel, drive out to a qualified highway, and wait for the display in front of you to read “hands free” and change to Tron blue. It’s no more difficult than any other cruise control system to operate, and I imagine with time and practice one starts to learn the best spots to go hands-free in their own daily driving cycle.

Larkin and I drove hands-free with a complete lack of drama or incident (save for the time I turned the system off by playing with the steering wheel buttons). Our F-150 stayed firmly centered in its lane, very gently modulating from side to side on the few slightly curved sections of the freeway on the route. No fuss or muss, which is the whole point.

When my attention turned away from the road for more than about five seconds, BlueCruise gave a little chirp. That’s in part by design—a warning against drivers checking emails or Instagramming morning-light driving selfies for too long. But Larkin explained the mask I was wearing over my nose and mouth exacerbated this.

“It’s really looking at your whole face; using all of your facial features to identify where your eyes are,” said Larkin. “Once it identifies where your eyes are, it locks onto those and is tracking where they’re moving. A lot of this development was done pre-COVID, when [wearing a mask] wasn’t really a use case.”

Like General Motors’ Super Cruise and Tesla’s Autopilot before it (much before it), BlueCruise feels like a useful way to make commuting incrementally less stressful. And with Ford’s rollout of the tech later this quarter on the Mustang Mach-E and Ford F-150, it’s likely to have a much larger effect in aggregate: The company expects an eventual take rate of about 15 percent for F-150 buyers. Considering Ford sells 700,000 to 800,000 F-Series trucks in good years, the number of BlueCruisers will scale fast.

Certain trims on new 2021-model year Mach-E and F-150 buyers have already been able to spec vehicles with a BlueCruise prep-pack, which includes all of the needed hardware and will require only a $600 over-the-air software update to enable. And Ford’s rates are actually reasonable in context.

Compared with Cadillac’s $2,500 Super Cruise sticker price (no word on Chevrolet or GMC pricing as yet), BlueCruise is a bit more reasonably priced—at least for the trucks. As part of the Ford Co-Pilot 360 Active 2.0 package on F-150, the hands-free system will run for a total of $1,595. On the Mach-E, BlueCruise will be standard on California Route 1, Premium, and First Edition trims, or can be bundled with the Comfort and Technology pack on Select trims for $3,200.

However! BlueCruise will likely hit you up with a monthly subscription fee after the three-year service period ends, just as Super Cruise does. A Ford rep confirmed BlueCruise will go on sale in Q3 but I’ll update this post if I get a more specific timeline.

Read the rest of the review over at The Drive.