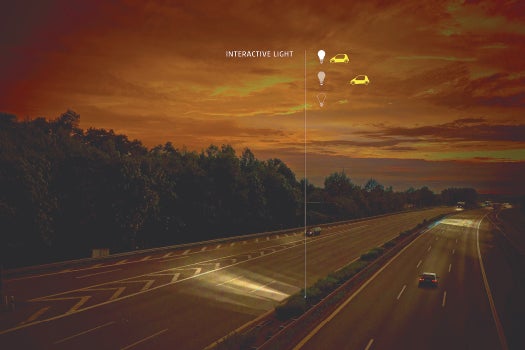 Lights that switch on only when needed could improve today's streets. Courtesy Studio Roosegaarde
SHARE

Every year, cars become more sophisticated. They can adapt to the speed of traffic, generate power from braking, and even park themselves. But the roads are pretty much made of the same stuff that was under your grandparents’ wheels, even though today we drive an average of 13,000 miles a year. Not since the 1800s, when we started replacing dirt and rocks with asphalt, has the driving surface seen a major change. But now, inventors, designers, and engineers are trying to make roads more useful, more visible, and less expensive.

The cost of energy is a major factor. Cash-strapped communities in the United States and Europe are so desperate to cut costs that they’ve recently started shutting off streetlights, even though lighting has been shown to reduce accidents. Jacksonville, Florida; Santa Rosa, California; and Highland Park, Michigan, have all turned off lamps in an attempt to save money. Communities like these need new ways to keep the lights on. Piezoelectric materials can harness vibrations and pressure from passing cars and convert that energy into usable power. In 2008, a rail station in Japan used piezoelectrics in its floors to take advantage of the vibrations from footsteps, generating enough power to run holiday displays. In 2009, an Israeli company tested these materials in a 10-meter strip of road and reported generating an average of 2,000 watts, enough to theoretically power 30 60-watt lightbulbs. And now, the California Energy Commission is currently studying whether piezoelectric materials will be economically feasible to use on the state’s roads. 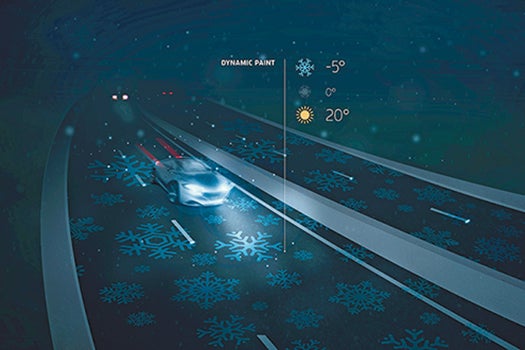 Daan Roosegaarde, founder of international design lab Studio Roosegaarde, based in the Netherlands, has another energy-saving idea: roads that glow. With the help of engineers from Heijmans, one of the largest road builders in Europe, he and his designers developed a highly photo-luminescent paint for delineating lanes that charges enough in sunlight (even on cloudy days) to glow bright green for up to 10 hours at night. This year, Roosegaarde plans to build a 300-meter-long prototype road to demonstrate both the glow-in-the-dark paint and another paint they’ve developed—one that changes from transparent to blue as the temperature drops below 32°F to warn drivers of icy conditions. Other untested ideas go further: lights that switch on as a vehicle nears and roadside wind turbines propelled by updrafts from passing cars.

Scott Brusaw, an electrical engineer in Idaho, is currently building a prototype solar-powered parking lot that can illuminate itself, with a grant from the Federal Highway Administration.Some people are building roads with magnets that can charge electric cars through induction. The lot will consist of panels strong enough to drive on fitted with solar cells and LEDs that can reconfigure lines on demand or communicate with drivers by, say, flashing a message to slow down for a hazard. Based on his calculations, Brusaw says an individual three-by-three-foot panel could pay for itself in a decade or two, through extra solar energy or by displaying advertising. 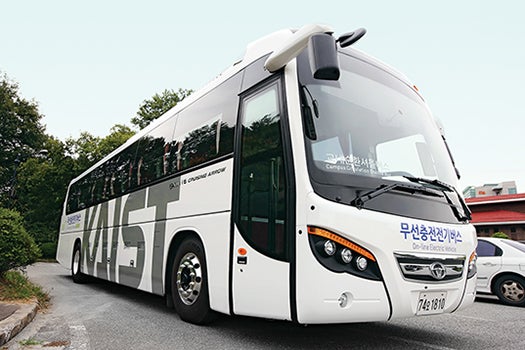 Magnets beneath the pavement charge this electric bus at the Korea Advanced Institute of Science and Technology.

Some road innovations may even determine the kinds of cars we drive in the future. To combat the current range anxiety of electric cars, some people are building roads with magnets that can charge electric cars through induction. The Korea Advanced Institute of Science and Technology is a leader in this area. In 2010, researchers started running an induction-charged bus in a Seoul amusement park, and another currently serves as a campus shuttle. The institute plans to put two similar buses on public roads this year.

Economic pressures could make many of these innovations attainable, but the most important demand for new road technology is the most straightforward: The driving surface itself needs to cost less. Rising oil prices have made asphalt more expensive, which is why between 2007 and 2010, 27 U.S. states increased the percentage of recycled asphalt allowed in roads. Sometimes the most futuristic ideas of all involve reusing the past.

Plus: Gallery: The Smart Highway