How to photograph moving vehicles

A step-by-step guide to capturing that perfect motion shot. 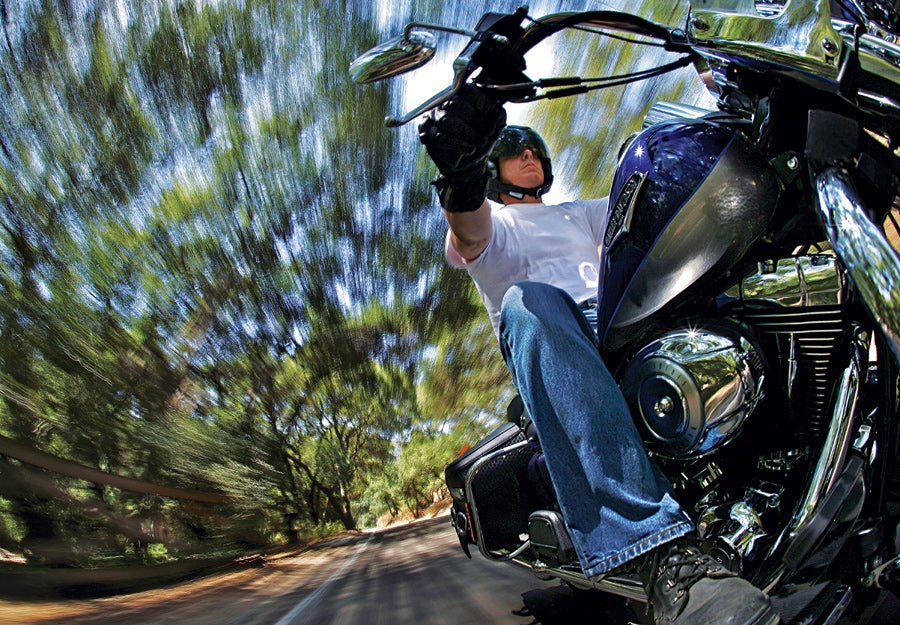 To find the right amount of motion blur, Miralle played with exposures. He started at 1/60 sec, and worked his way down to 1/10 sec before settling on 1/15 sec at f/13 (ISO 50). He also bracketed each frame by 0.67 EV. A neat trick: He chose a bike with a shiny gas tank to bounce fill light up onto the rider’s face. Donald Miralle
SHARE

This article was originally published on Popphoto.com

When the German magazine Stern approached Donald Miralle to shoot a new line of Harley-Davidson motorcycles, the Carlsbad, California-based commercial and editorial photographer was thrilled. Then it hit him: “I’d had very little experience shooting moving vehicles!”

It helped, though, that Miralle had a particular image in mind-the one shown here. “My aim was to find an angle on this subject that no one had yet documented,” he says. “While I may not have entirely succeeded, I feel I did place my own perspective and spin on it.”

Capturing that image required some very specialized gear. Miralle attached his camera to the Harley using a redundantly secured set of clamps and brackets from Manfrotto. Riding just ahead, in the back of a fiatbed pickup, he tripped the shutter using a pair of PocketWizard Plus II Transceivers ($170, street).

If you try this, start slow. Even motorcycle speeds of 5-10 mph can produce thrilling motion blur. And they’re safer.

Step 1: Get The Right Gear

A full-frame camera (Miralle used a Canon EOS-1Ds Mark II) captures a wider view than APS-C-sized sensors. To get full views of both the bike and the background, Miralle chose a 15mm f/2.8 Canon EF fisheye lens.

Shady sites will allow the slower shutter speeds you need to record motion blur. “Here, I liked the way the trees and blips of sky created a visual texture,” says Miralle. “A plain blue sky wouldn’t have conveyed speed or motion.” For sharpness, seek out smooth roads.

Step 3: Secure And Stabilize The Camera

You need a long shutter speed for beautiful motion blur. But set it too long and you risk a blurry biker. Best: 1/10 to 1/30 sec.

The cool part about this assignment? Miralle only needed one good shot. The uncool part? It took hundreds of pictures and two days to get it.