Owning your personal health data can come at a cost. 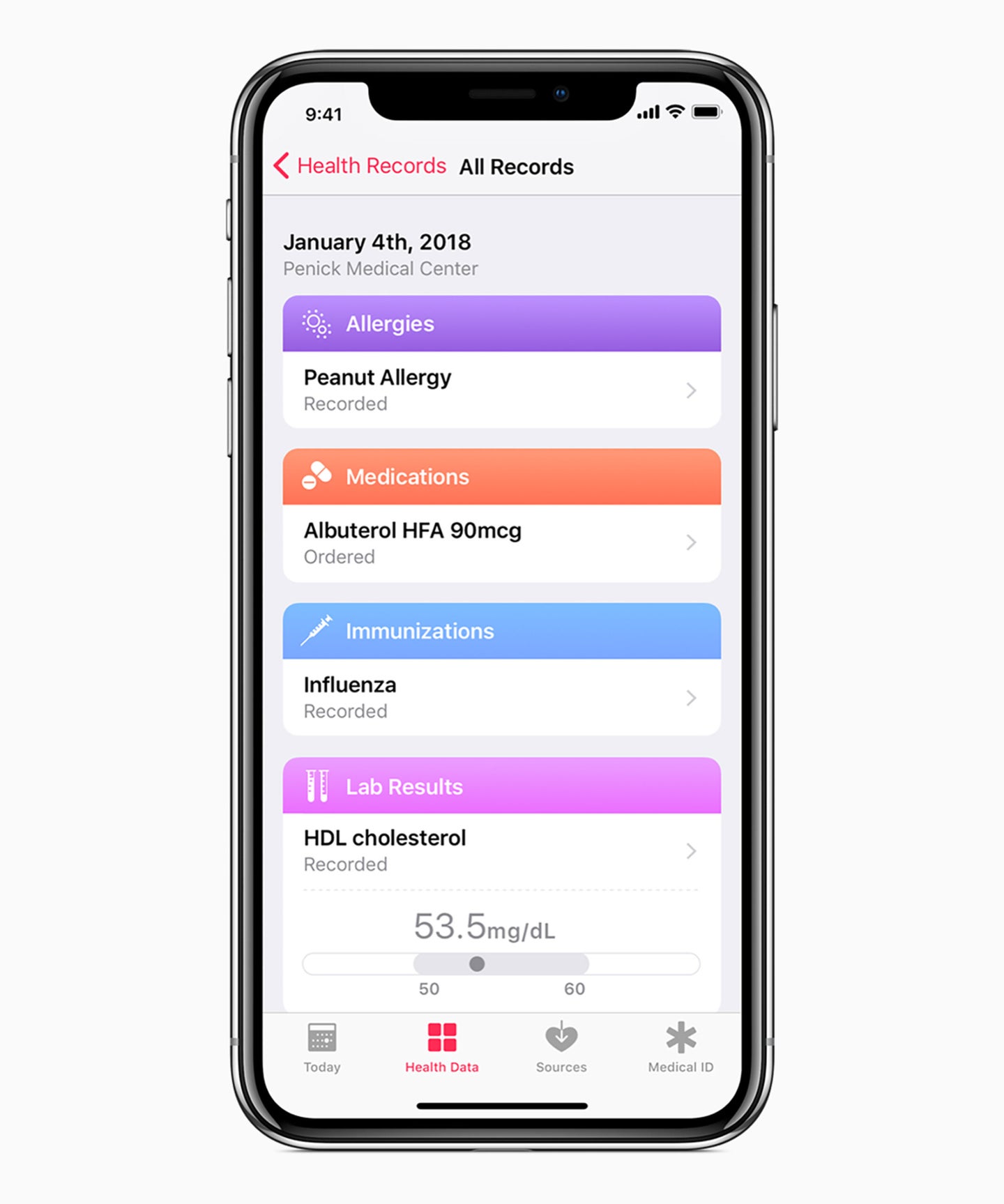 Last winter, when I started having problems with my knee, I made an appointment to go see an orthopedist at NYU Langone. I was in and out with a referral to see a physical therapist, and the hospital was left holding onto a small slice of my medical history.

But a month later, I had the option to pull those records into the Apple Health application on my iPhone, leaving me with easy access to my information and an easy way to show that information to another doctor, down the line.

NYU Langone started allowing its patients to access their medical records through the health records feature on Apple’s Health app in a wave of health care organizations integrating the Apple platform last winter. The platform launched in January 2018 with 12 health care organizations, and is now available in hundreds of hospitals. It’s the latest attempt at building a system for personal health records, and one that focuses on patient autonomy, allowing users to own and synchronize all of their medical data from different places, and keep it in one centralized location.

Under typical health record infrastructure, chunks of data are siloed off in each health care organization that you see doctors or receive treatment at. “That ends up being important, if you’re on vacation, and sustain some type of injury. You could show up at a hospital that knows nothing about you, and have trouble accessing your records,” says Christian Dameff, an emergency physician and informatics fellow at University of California San Diego Health. “There’s not some type of easy repository of health information. Why is it so hard to get information from one health system to another?”

UC San Diego Health was one of the initial dozen groups involved, and this month, they published their first set of data on patients’ experiences with the program. Turns out, they like having access to and control over their personal medical information.

Personal health records aren’t a new idea, and Apple isn’t the first big technology company to try and create its own platform. Both Microsoft and Google tried to build web applications for personal health records in 2007 and 2008, respectively—and both systems failed. Patients had trouble connecting to the systems, Dameff says, and the user experience wasn’t intuitive.

“It’s different now, because we have smartphones,” Dameff says. “There are mechanisms where consumers have these powerful personal devices. We’re connected. It’s trivial to have an application on your phone to facilitate this.”

Dameff and his colleagues surveyed patients using Apple Health Records in the UC San Diego health system. 132 responded, and nearly all said that connecting to the platform was simple. Just under 80 percent said that they were satisfied with the feature, and 90 percent said that using the system “improved their understanding of their own health, facilitated conversations with their clinicians, or improved sharing of personal health information with friends and family.”

The last point is key, Dameff says. “When we take data out of hospitals, and make it easier for patients to access it, they’re more literate about their own heath.”

Personal health records help break down the artificial barrier between the aspects of your health contained within the medical system and the rest of your life, says Wanda Pratt, a professor at the Information School at the University of Washington with an adjunct appointment with the Division of Biomedical and Health Informatics at the university.

“Health is a part of our life. Health affects our life, and life affects our health—why do we draw this line, when they’re so interconnected?” she says.

Integrated systems can allow physicians to better understand the lifestyle factors that play a role in their patients’ health, like the amount of sleep their getting, or their activity levels, both of which could be tracked by the phone.

“I think Apple Health is a really smart bridge because it gets information from hospitals, and from patients’ homes, and puts them where they’re going to share a common platform,” Dameff says. “For the most part, people’s homes are medical black boxes. I don’t know what’s going on there.”

That integration also allows other third party applications to access and use medical data. That might be useful, in some situations: A diabetic patient, for example, could share their blood sugar information with an application that could help them manage their treatment.

Apple opened up its health records API to developers in June 2018, to allow them to build applications that could make use of personal medical data. Medisafe, a medication management app, announced an integration with Apple Health Records in October, for example.

However, data and medical privacy could become a concern, particularly when it comes to advertising. “It would be creepy if your medical record said you have diabetes, and then you got marketing for diabetes products. That would be a very bad way to go,” Pratt says. It might provide patients with useful information in some cases, but it could also lead to distrust and worry about the technology. “It can get into a bad space for health, especially because your phone is visible to other people,” she says. “If you’re a teenage kid, and all of a sudden you get advertisements for STD treatments, and your parents are around—that’s not okay.”

Dameff says that third party integration is definitely something to keep an eye on. “There’s so much in there that people would love to get their hands on,” he says. The question is whether consumers will read through, or understand enough legal jargon, to parse through an entire terms of service on a third party app to know where, exactly, the data they share might go. The answer, according to Dameff, is “unfortunately not, as we’ve seen time and time again.”

Concern about data access and privacy, and the need for integrated information, will vary person to person, Pratt says. “For people who have to manage a lot of information about their health, making that easier is so valuable. Even if there are privacy concerns, it’s worth it. Others feel the exact opposite. We need to be able to support both,” she says.

In the meantime, Apple Health Records are becoming available daily at hospitals and health care organizations around the country. The Veterans Health Administration—the largest health system in the country—is in talks with Apple, according to the Wall Street Journal. As services come online, it’s important to identify potential barriers to new health care technologies. “We need to make sure this emphasis on having tech solutions doesn’t leave out those who don’t have the means to access them,” Pratt says.

Health systems have to build infrastructure to support personal health records like Apple Health Records, and that sort of investment might not be feasible at smaller hospitals, for example, Dameff says. The nature of smartphone-based health records also necessitates a level of digital savvy that older people might not have. “In some sense, that the group who needs it the most,” and that has more complicated medical care, Pratt says.

Going forward, it will be important for researchers, physicians, and patients to understand how integrated data affects health, Pratt says. “What does it mean, now that this is integrated? And what can we pull in to make it better?”