Building a barbell for 1,000 pound deadlifts takes careful engineering and lots of testing

The Rogue Fitness Elephant Bar is built to bend. 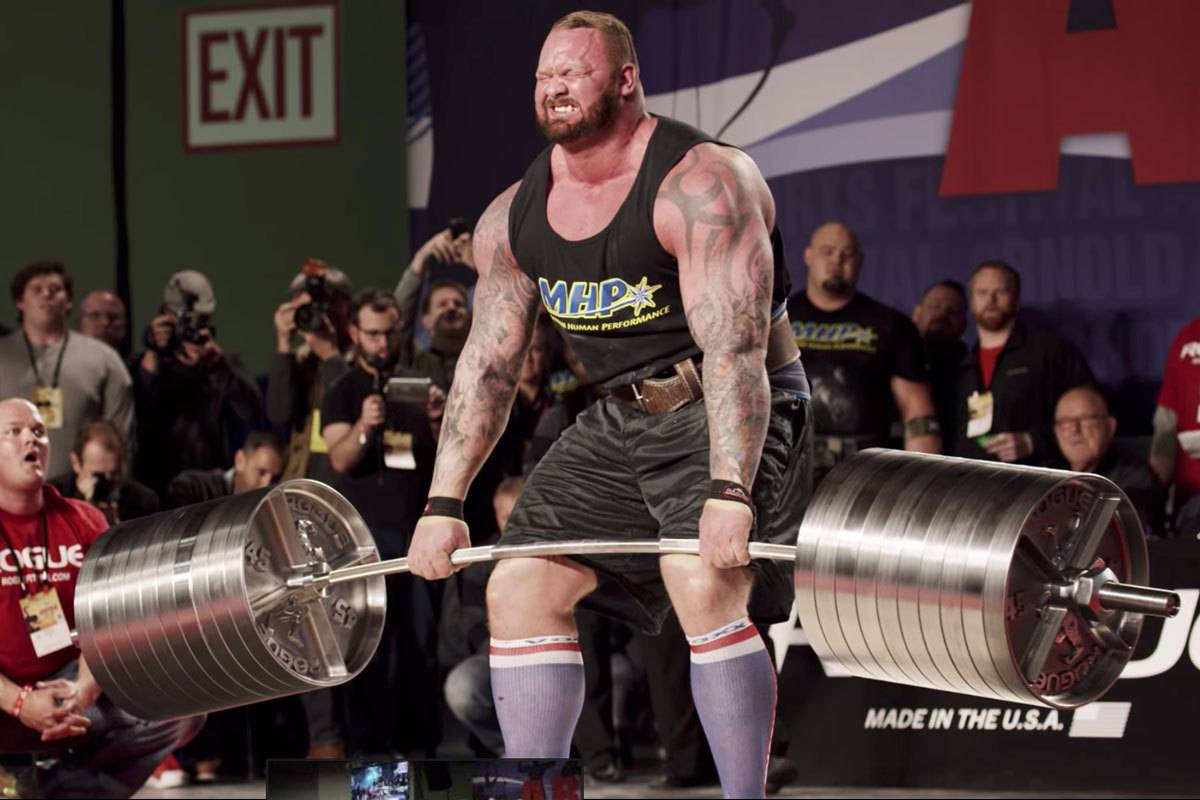 (Above: Watch the 2019 Arnold Strongman Classic live to see the world’s strongest athletes lifting with the Elephant bar.)

Way back in 1987, at the Pure Strength strongman competition in Scotland, iconic strength athlete Jón Páll Sigmarsson successfully lifted a 1,005-pound contraption made of two huge wagon wheels connected by a thick wooden post. Before he put the weight down, he looked out into the crowd—his face bright red and his muscles bulging—and shouted, “There is no reason to be alive if you can’t do deadlift.” It was a fitting tribute to one of the purest measures of raw strength in the world of weightlifting.

Fast forward to March 2019, some of the strongest people in the world will grab their knee sleeves and protein shakes and head to the Arnold Sports Festival to see whose muscles can move the most weight. During the deadlift competition, however, they won’t be hoisting wagon wheels. Instead, they’ll be pulling the Rogue Fitness Elephant Bar, a carefully engineered barbell that’s built to endure the rigors of half-ton lifts without permanently bending or breaking.

The Elephant Bar was born out of an older lifting event in which competitors lifted a bar loaded up with modified Hummer tires. It was an impressive-looking lift—the nearly 14-foot bar bent substantially under the weight, which gives the whole event a superhero vibe. But because the tires are much taller than a typical weight plate, the bar rested much higher in the setup, which meant it didn’t count as a traditional deadlift. Fitness equipment manufacturer Rogue Fitness set out to build a bar that would give a similarly impressive bend to remind the crowd just how absurd these loads truly are, while staying more loyal to the typical form. The bar’s name and the event are were conceived by the late Terry Todd, a prolific weight lifter, trainer, and journalist, who served as the director of the Arnold Strongman Classic.

The result is a bar that’s 9.5-feet long as opposed to the typical roughly 7-foot bars you’ll find at your local gym. “The farther apart the weights are, the more it will flex when you lift it,” says Ahmik Jones, director of product development at Rogue Fitness.

To bend like that without breaking, Rogue also had to find the right metal. “We needed something between 190,000 and 220,000 psi tensile strength,” says Jones. “If the tensile strength is too low, the bar bends with normal use. If you go beyond what’s necessary, then you make the bar brittle.” The company landed on 200,000 psi stainless steel, which it has also incorporated into some of its other, more traditional barbells.

Getting ready for the Elephant Bar Deadlift, making sure we are ready for the Rogue Record Breakers. 1255LB Bar dropped 15 times, straight as an arrow. #leadbyinnovation #lesstalkmoremanufacturing #ryourogue

Making a bar that could support that kind of weight was simple. The challenging part, however, was building one that could endure repeated lifts and stay straight even after many drops.

That’s where the thickness of the bar comes into play— it’s a crucial factor for keeping things straight. A typical bar has a diameter of 27mm, which wasn’t burly enough to handle the abuse. Ultimately, a 29mm bar was sturdy enough to resist warping, even after repeated lifts. “We started off the testing with local strongman competitors,” says Jones. “Then we used a forklift. We put 1,050 pounds on the bar and brought it up to the height it would reach when lifted by the tallest competitor in the competition. We dropped it 50 times with a quick-release shackle, measuring for straightness as the beginning and the end.”

Hafthor Bjornsson was last year’s winner of the event with a maximum successful lift of 1040.5 pounds. You can see it in the video below by skipping to 1:07:00.

Watch a typical powerlifting competition or a deadlift world record attempt and the barbell setup will look much different than the massive Elephant bar. The standard bar is shorter, but the weight plates are also much thinner. “With competition plates, you can fit 1,000 pounds in the first six or seven inches of loadable area,” says Jones. That keeps the weight closer to the lifter and prevents the weights from wobbling around during the lift.

For the Elephant Bar event, however, the competitors use custom-made, two-inch thick plates that throw back to the classic York barbell plates that became standard in the mid 20th century. They look impressive, but they also spread the weight out even more to emphasize the bar bend.

Because the plates are so big, the loadable area on the Elephant Bar measures 28-inches long, compared to 17-inches on the bar at your gym. Each plate starts as a roughly 160-pound block of steel before spending about 13 hours in CNC mill to carve out the basic shape, which includes an embossed image of Arnold Schwarzenegger posing. After that, they spend time in a water jet and then undergo a process called blanchard grinding, which uses a rotating machine to shave metal off the back of the plate until it reaches exactly 45 pounds. The company made roughly 32 of them for use in the contest.

What does it feel like to lift on a long bar?

In the Elephant Bar’s first year in competition, British strongman Eddie Hall broke the world record, pulling 1,026 pounds while Schwarzenegger himself shouted encouragement from just off the platform. “If you watch that video, the weights are all over the place,” says Jones. “He had to fight it. The weights flop all around.”

According to strongman competitor Catherine Toniatti Yanulavich, who has lifted with a wide variety of bar lengths, deadlifting on a long bar has some advantages and disadvantages. “In the first few inches of the lift, you’re just pulling the slack out of the bar so it feels easier,” she told us. “Once the bar comes off the ground, though, you get all of that weight in your hands. If those weights start oscillating you need to balance the wobble with your core. It’s easy to fall backwards.”

How far can the deadlift go?

Eddie Hall broke his own record when he pulled 1,102 pounds (500 kg) at the World Deadlift Championship in 2016. He did it with thinner plates and a standard bar, but the deadlift record is moving fast as athletes get stronger. Rogue has tested its elephant bar to 1,255 pounds. “We tested it to make sure there’s not some new levels of forces that come into play when you add an extra 200 pounds,” Jones laughed. “If anyone gets all the way up to that weight, the bar can handle it.”