As we passed westward from the steep mountains of Kentucky’s eastern section into the rolling hills of its bluegrass country,... 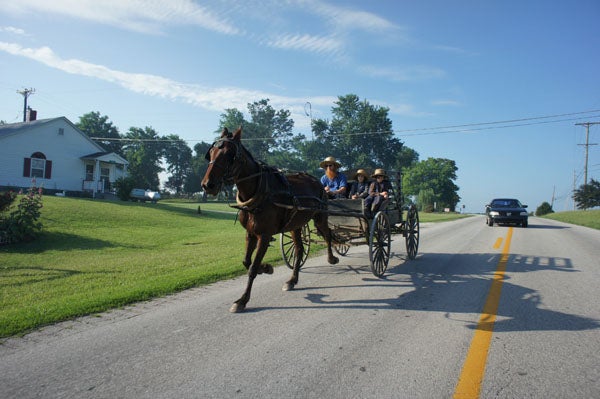 Much like the pictured Amish buggy, our EcoTour vehicle remained a temporary impediment to passing automobiles in Western Kentucky. Pierce Hoover, taken with the Sony NEX-5
SHARE

As we passed westward from the steep mountains of Kentucky’s eastern section into the rolling hills of its bluegrass country, we finally stopped having to share the back roads with massive coal haulers. Instead, we found ourselves travelling alongside tractors, farm trucks and the occasional buggy. Western Kentucky is home to a population of Amish farmers, known for their throwback, simplistic lifestyle, which is most visibly evidenced (on the road, at least) by their shunning of automobiles in favor of horse-drawn carriages.

We felt a certain affinity for those vehicles – my son jokes that we are both single-horse vehicles, as our electric drive has a maximum output of slightly over one horse power – though we usually cruise at 0.75 hp for maximum efficiency. Real horses are capable of short bursts of energy much higher than the 750 watts that define a standard measure of horse power, but in real life, most horses can sustain, as you would expect, just around 1 hp for long distances. So in reality, our hybrid vehicle is very well matched to a one-horse buggy in terms of power.

Over the course of a couple of days, we had several chances to see how the two technologies, assuming you see a horse as a technology, stacked up. On several occasions, we were able to overtake buggies, but not by overwhelming margins. And, like the Amish buggies, we remained an temporary impediment to passing automobiles. Drivers would slow, then speed by us in their powerful, climate controlled bubbles. What might surprise some of those drivers – much as it has surprised me, as we have gone to a 15 mph mind set – is that even travelling at our seemingly tortoise-like pace will get you there in a reasonable time frame, especially if the destination isn’t across the state, but just across town.

The reason the Amish stick to their buggies, I’ve been told, isn’t a wholesale rejection of technology, but rather an exercise in practicality. In close-knit communities where families live and work just a few miles apart, a horse-drawn vehicle is practical transportation. And compared to the cost of an automobile, a buggy comes in at few thousand dollars, lasts for decades, and can be repaired quite easily. Fuel costs are determined by the hay crop rather than oil futures, and the propulsion system is largely self-sufficient – though we did have to dodge a few of the more visual emissions that are inevitably left on the road. I’d be the last to suggest that all we return to the era of horses and buggies, but I do think there is a lesson here that could be applied to urban and suburban transportation that would greatly reduce our dependence on fossil fuels.

Rather than employing tank-sized SUVs for two-mile runs to the store, we could embrace a new generation of light, compact NEVs (neighborhood electric vehicles). They wouldn’t have to be as diminutive and minimalist as ours. Toss in a full roof, a composite protective body and a few extras and you would still have something that could run 20 mph on 4 or 5 horse power and operate all week for a dime’s worth of electricity. Several times a day during our tour, we’d pull into a country store with gas pumps, and would inevitably draw a laugh from anyone stopped to fuel up by proclaiming “no thanks, we don’t need gas just yet.”