Across America On A Single Light Bulb’s Worth of Power 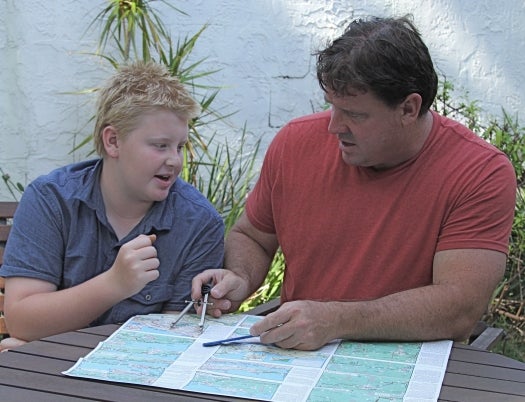 A month before the tour, the father son team are pictured planning out their route. Pierce Hoover
SHARE

In just over a month, my son and I will set out from New York City on a 4,500-mile, summer-long road trip. We’re not worried about rising gas prices, because we’ll be making the trip in a vehicle that gets the equivalent of 1,000 mpg or better. It’s a cart-sized two-seater that we built with the help of a few friends, and it runs off the electrical energy equivalent to that consumed by a single 100-watt light bulb.

Here’s the short version of the long story: It began when, like so many parents before me, I found myself annoyed each time my 12-year-old son Nash would forget to turn off his room lights before heading out for the day. Nagging did no good; I tried charging him for the wasted electricity, but with a kilowatt of electricity going for around 9 cents in our town, that was a matter of pennies, not dollars.

It wasn’t just a matter of economics. I wanted to instill in him the awareness that electric power, while inexpensive, doesn’t just flow effortlessly from a socket. Electric energy is the product of a complex infrastructure that runs back through the grid to places where big wheels labor and massive boilers consume natural resources, create heat, and emit waste gasses.

To bring the concept down to a personal level, we went to the gym, where I had him straddle a stationary bike that displayed his effort level not only in miles per hour, but also in watts. It took a moderate but steady pace to generate the energy required by a single 100-watt bulb. Sprinting, he briefly managed to pedal hard enough to power the equivalent of two lights, his video gaming system, and a ceiling fan.

One Friday, we were pulling out of the driveway for a weekend camping trip when he noticed a light burning in his upstairs bedroom. He ran back in to flip the switch, and on returning, remarked that he’d just saved the power plant a whole lot of pedaling. “We should get credit for the extra pedaling, and use it for our next trip,” he added.

We speculated as to just how far we might go on a light bulb’s worth of saved energy. Several years prior, a buddy and I had converted an old golf cart into an off-road toy that Nash immediately dubbed the Swamp Crawler. “How far would three days of light bulb energy go in the Swamp Crawler?” he asked. Doing a quick watt/hour estimate in my head, the answer was “just a few miles.”

“OK, so let’s make a new crawler with a better motor,” he countered.

“We’d have to make it a lot lighter,” I told him, “and with smaller tires, and better batteries, and a transmission for hill climbing, and….”

I should disclose that I’m not an engineer, and I don’t have an extensive tech or mechanical background, just a love for tinkering, and a curiosity for the physical sciences. But even with my limited expertise, the more I considered the possibilities, the more firmly I became convinced that we could do something pretty remarkable with Nash’s “light bulb energy.”

“Turn that light off before we start a trip, and I’ll build a car that can go across America on the electricity we save.” I proclaimed.

Next, with that big, audacious goal out in the open, I’d have to figure out how to make it a reality.

In the next post, I’ll get into the actual design of the vehicle that will carry us from coast to coast on the power of a single light.