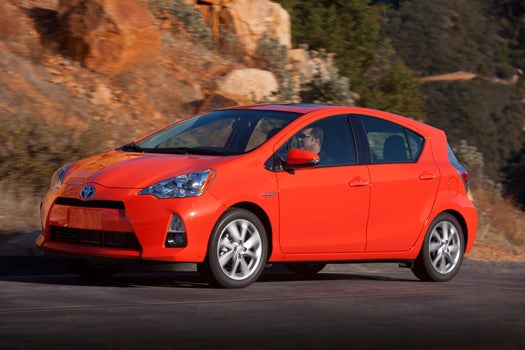 Recently Bloomberg ran a report stating that Toyota is on track to sell over 250,000 Prius-branded vehicles in the United States in 2012. If you live anywhere on the coasts or in any urban and/or quickly gentrifying area, you might think Toyota has hit that saturation point already. In California, it seems that every other car on the road is a Prius–including most of the taxicabs. Toyota wants more from the Prius than the standard “Liftback” and the family cruiser Prius V (for versatility). Now, with the introduction of the Prius C–the C is for City–Toyota has created a smaller, less expensive, entry level Prius for the masses. Beware all other compact cars, hybrid or not: the gauntlet has been thrown down.

The C is all-new to the Prius line-up for 2012 and comes equipped with a 1.5-liter, four-cylinder, Atkinson cycle engine with 73 horsepower and 82 lb.-ft of torque coupled to a 60 hp/45kW electric engine and mated to a CVT transmission. The C produces a total of 99 horsepower, considerably less than the 134 total horsepower in the Prius Liftback. That makes it kind of the baby version of the regular, aggressively designed five-door hatchback Prius. It’s shorter by about 20 inches, lighter by about 500 pounds, and is a lot more nimble than the Liftback. In order to get to market quickly and at a compact car price, Toyota took a lot of the underpinnings from the tried and true Yaris, shrank the Hybrid Synergy Drive system along with the battery pack down, and presto whammo, the Prius C. 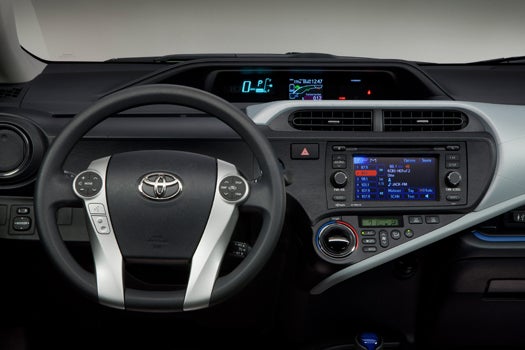 We like the fact that Toyota has gone the extra mile to gamify the driving experience by measuring your savings in gallons and dollars as well as the driver’s overall eco footprint. Knowing how much money I saved while driving the C brought out the miser in me–in a good way. We also like the way the C looks, all bulbous angles with a firm, hard stance and nicely laid out interior. It’s also a lot tougher looking than the Liftback and goes a long way to appealing to the “kids” who’ll buy the car.

The Drive: While the C won’t win any awards for its sporty drive–it makes the larger and more powerful Prius Liftback feel like driving a 3 Series–the C is serviceable enough in the city and on congested highways to make you forget you’re in a car with a 0-60 time of about 11.5 seconds. The C’s powerplant labors under the constraints of full throttle, with a loud gasp and an emphysemic wheezing for power. On any sort of twisty road, the C seems nonchalant, as if it doesn’t want to be thrown around at all. That said, we did average close to 50 mpg even with the dreaded affliction of “car journo-itis,” wherein you must mash the gas at every opportunity, much to the chagrin of say, the car journo’s wife.

We came to realize after a few days that sportiness is not the point of driving the C. The C is meant to cajole you into relaxation, where the aim and goal is to get there, safely and on time with a maximum feeling of restfulness and maximum savings for your wallet. It’s not a driver’s car, it’s a consumer’s car for those who study Zen. And with four-dollar-a-gallon gas, it’s a small good thing to be meditative about the journey. 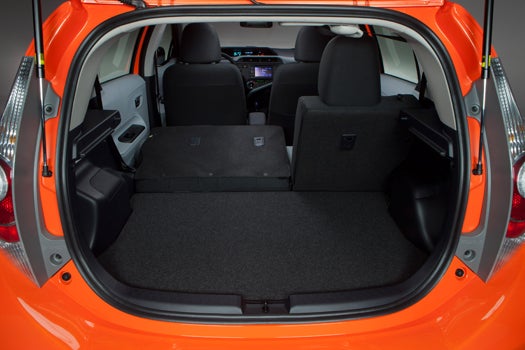 The engine is as buzzy as a hive of wasps, the road noise and NVH (noise, vibration, and harshness) is as loud as a Sleigh Bells concert, and the seats are lacking in bolsters and padding. We know, of course, that this is an inexpensive compact car, but we wish a little more mind was paid to the ride quality.

The highest rated city fuel economy of any vehicle without a plug (53 mpg city and 46 mpg highway): check. A low starting MSRP of $18,950: check. A brand name Prius: check. The Prius C is a great alternative to the basic economy car and presents a stylish, safe alternative with amazing gas mileage. While we’d save our pennies for a Prius Liftback, some would be hard-pressed to spend the extra $4,500 or so. With good reason, too: the C, while not perfect, gets the point that sometimes driving is about the what’s missing, rather than what you want.