It seems like every week there’s a new scheme for making electric vehicles a reliable transportation option for the masses,... 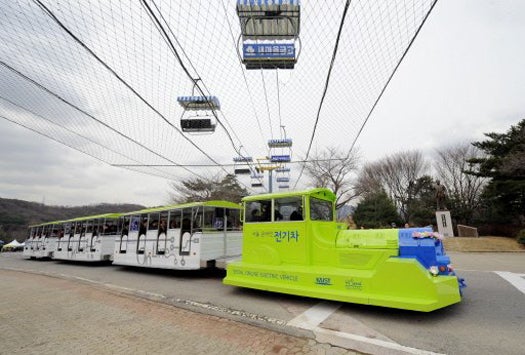 It seems like every week there’s a new scheme for making electric vehicles a reliable transportation option for the masses, but a team of South Koreans at Korea Advanced Institute of Science and Technology (KAIST) today launched what may be one of the most feasible plans we’ve seen. The Online Electric Vehicle (OLEV) gathers power magnetically from electric strips buried below the road’s surface as it travels, eliminating the need for long-term recharging.

The OLEV now in service in Seoul tows three passenger buses behind it, shuttling them around a preset route at a Seoul amusement park. Recharging strips were installed in four segments along the route, totaling about 400 meters of battery-restoring pavement. A receiver mounted on the bus’s chassis picks up the current through a contact-free magnetic system that collects juice with 70 percent efficiency. That electricity powers the motor and recharges on-board batteries that kick in when the bus isn’t near a charging area.

The beauty of the OLEV isn’t just that it’s electric, but that, because it charges while it’s operating, it rarely needs long periods to recharge or huge batteries to store large quantities of power. KAIST researchers estimate that if the system is adapted to Seoul bus routes — as it should be, if it passes muster during this amusement park trial run — only 20 percent of the roadway on bus routes would need power strips installed. By installing the strips in places where buses idle, like bus stops and busy intersections, they can more or less run continually using nothing but electric power and can do so with a battery one-fifth the size of that on conventional electric vehicle.

That saves on both cost and passenger space, making the OLEV more efficient all around, and that’s not even factoring in the cost savings of not having to wire entire bus routes to keep the vehicles powered. Further, once the city lays down enough electrically charged roadway, there’s nothing to stop other vehicles from adopting the tech.

There’s no set timeline for rolling out OLEV tech on city bus routes, but Seoul does plan to show off the technology by using OLEVs to bus around G20 delegates when the summit is held there in November.