Michigan researchers have built a prototype of a new auto motor that does away with pistons, crankshafts and valves, replacing... 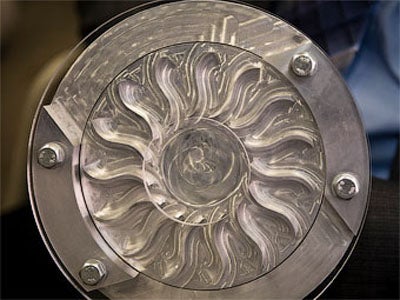 Michigan researchers have built a prototype of a new auto motor that does away with pistons, crankshafts and valves, replacing the old internal combustion engine with a disc-shaped shock wave generator. It could slash the weight of hybrid cars and reduce auto emissions by 90 percent.

The generator is about the size of a saucepot, and would replace the 1,000-pound power train in most cars — no transmission, cooling system, emissions regulation or fluids needed. Norbert Müller and colleagues at Michigan State University showed off the new motor prototype at a meeting with the Department of Energy’s Advanced Research Projects Agency.

It consists of a rotor carved with wave-like channels. Fuel and air enter through central inlets, and the rotor spins to block their exit through a separate outlet. The sudden build-up of pressure generates a shock wave, compressing the mixture. Then it’s ignited, and as the rotor keeps spinning, the outlet opens again to let the hot gases escape. New Scientist explains in further detail.

The novel generator would use about 60 percent of fuel for propulsion, according to MSU. This is a dramatic improvement over typical car engines, which use only 15 percent of fuel for forward movement. The system could also make cars 20 percent lighter, improving fuel economy even more.

MSU received a $2.5 million ARPA-E grant to develop the technology. Müller said he hopes to have an even larger 25-kilowatt prototype by the end of this year.