You Can Help Redesign The Spaceship Buildings From ‘Men In Black’

The iconic New York State Pavilion is in disrepair, but a competition wants to change that 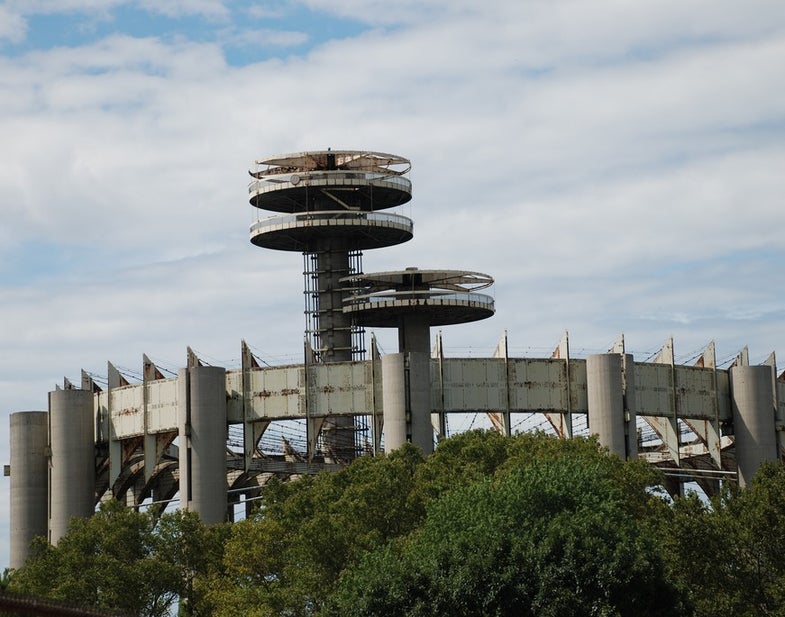 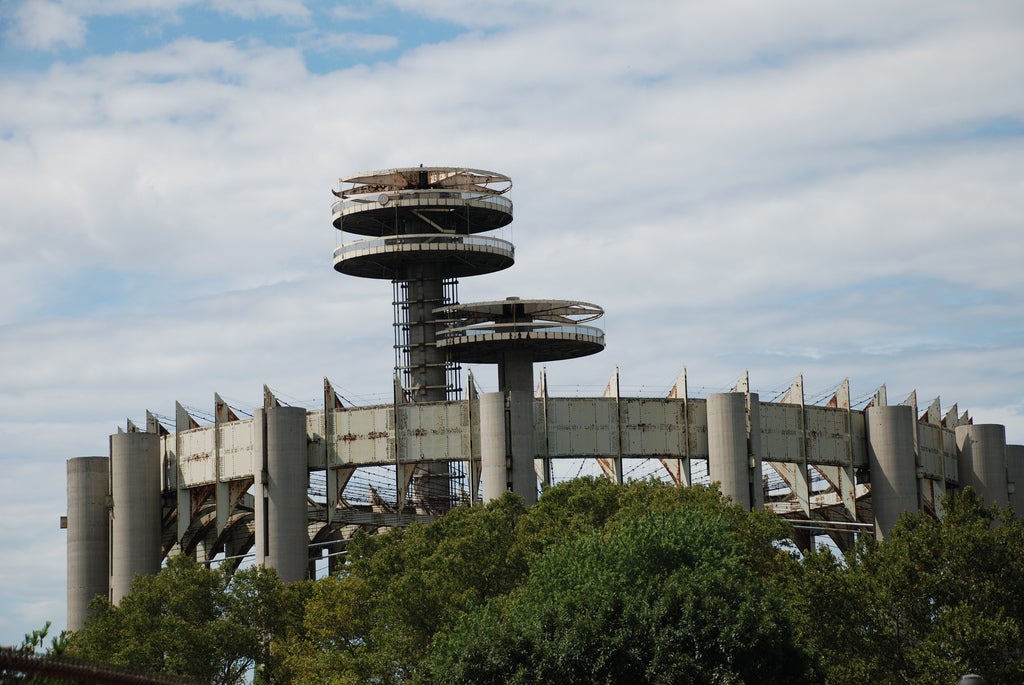 Philip Johnson’s New York State Pavilion, which was designed for the 1964-65 World’s Fair in Queens, has slowly deteriorated over the years, leading to its rundown condition today. The good news is that it won’t be for long.

Remember that scene in Men in Black when Will Smith and Tommy Lee Jones have to climb up a tower in Queens to stop an alien from stealing a flying saucer on top of it? Well, if you’re unfamiliar, that’s a very real place called the New York State Pavilion, and it was designed for the 1964-65 World’s Fair by Philip Johnson. This futuristic creation, which features an observation deck called “Astro-View,” among many other sci-fi-looking features, has been celebrated for years by tourists and architects alike. In short, it’s regarded a masterpiece of 20th-century architecture that has attracted tons of people to Queens for years since its creation.

There’s just one problem: it’s falling apart. Yup, time has not been kind to the New York State Pavilion. Over the years, the structure has seemingly transformed from a Jetsons-like future structure to something that would look right at home next to the creepy amusement park in Chernobyl (you know the one). The good news is that this is all may change soon thanks to the New York State Pavilion Ideas Competition.

This competition, which is sponsored by the National Trust for Historic Preservation, People for the Pavilion, and Queens Borough President Melinda Katz, hopes to raise awareness about the landmark by holding a design competition that’s open to the public, regardless of experience. This means that anyone can submit their ideas, even if they are off-the-wall. The first place winner will be awarded $3,000 and may have their design implemented in the future — though its ultimately up to the city government to decide what to do with the buildings, and they’re not obligated to follow any of these designs. The competition deadline is July 1, 2016 so if you have an idea, you better get a move on. So far, there’ve been quite a few awesome designs to choose from. Here are our favorites. 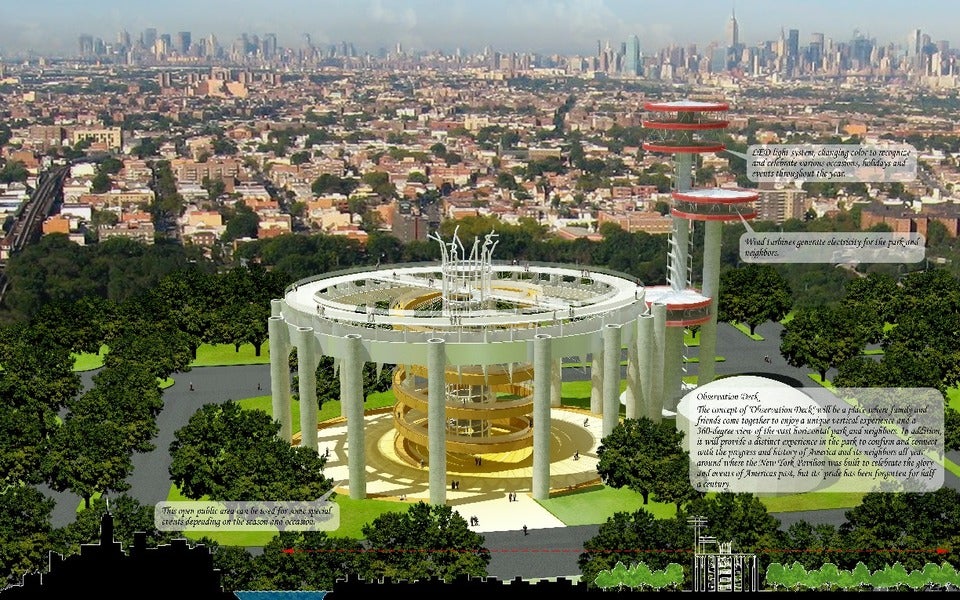 Aptly dubbed the “Observation Deck,” this design, created by Ji-Hwan Park, fully embraces the older feel of the New York State Pavilion. Basically, this redesign would let the public explore the structure on a series of decks on the large ring, overlooking the surrounding neighborhood. Also, wind turbines in the observation decks (the UFO-looking towers on the right) would provide electricity to the pavilion and parts of Queens. 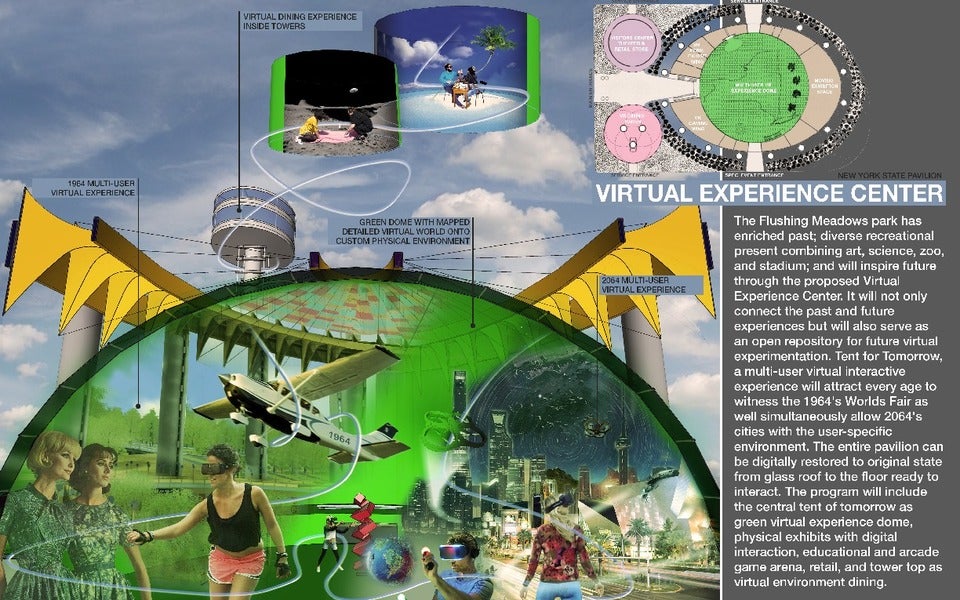 Designed by Ankit Darda, the “Virtual Experience Center” would radically redesign the pavilion by incorporating modern technologies to allow the public to explore the past. A green dome would take center stage in the pavilion where people would go inside to use VR headsets to witness what the landmark looked like back in the 1960s as well as what it may look like in the future. This is an interesting idea because it opens up the visiting experience to encompass all of the pavilion’s history (even the parts that haven’t happened yet). Of course, the other part of the design is to actually restore the pavilion to keep it intact for generations to come. 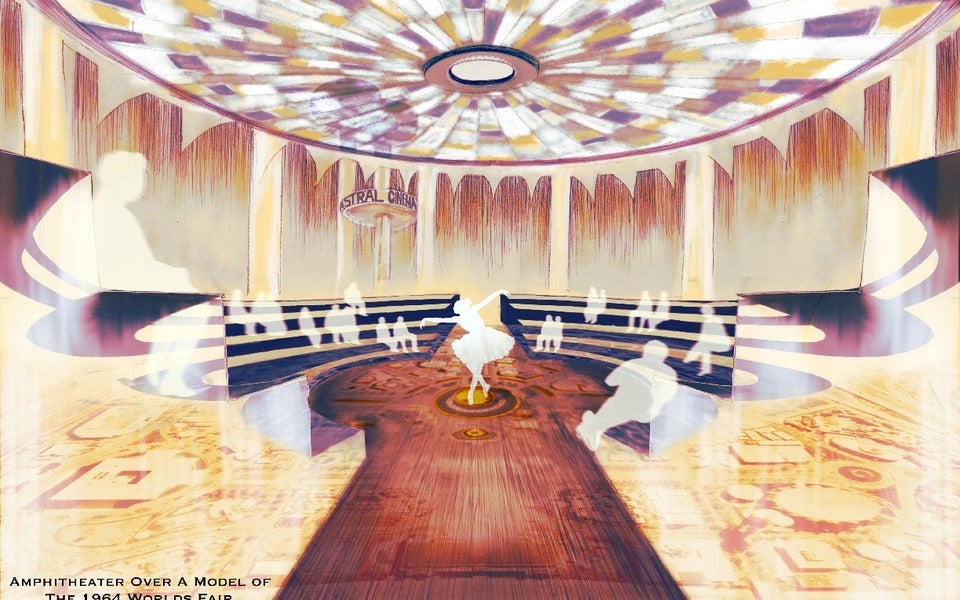 Amphitheater Over A Model of The 1964 World’s Fair

With the “Amphitheater Over A Model of The 1964 Worlds,” designer Jacqueline M Lavin hopes to transform the pavilion into a living time capsule. This would involve creating an amphitheater made of plexiglass that visitors can look through. Behind this glass would be a scaled replica of the 1964 World’s Fair that visitors could view. In a way, this allows people to enjoy the pavilion while also remembering its past. 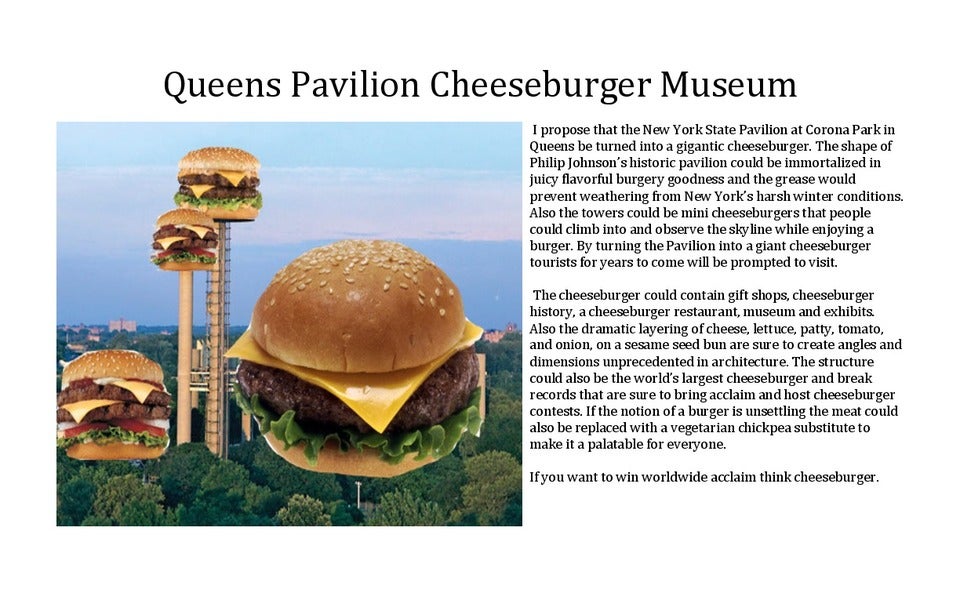 “I propose that the New York State Pavilion at Corona Park in Queens be turned into a gigantic cheeseburger,” designer Caleb W Haines says in his description. Yup, a gigantic cheeseburger. The Ideas Competition is, after all, “anything goes.” So far, the project, which hopes to turn the pavilion into one giant cheeseburger and the observation decks into smaller cheeseburgers, has 88 votes, which means the competition may have a Boaty McBoatface situation on its hands. 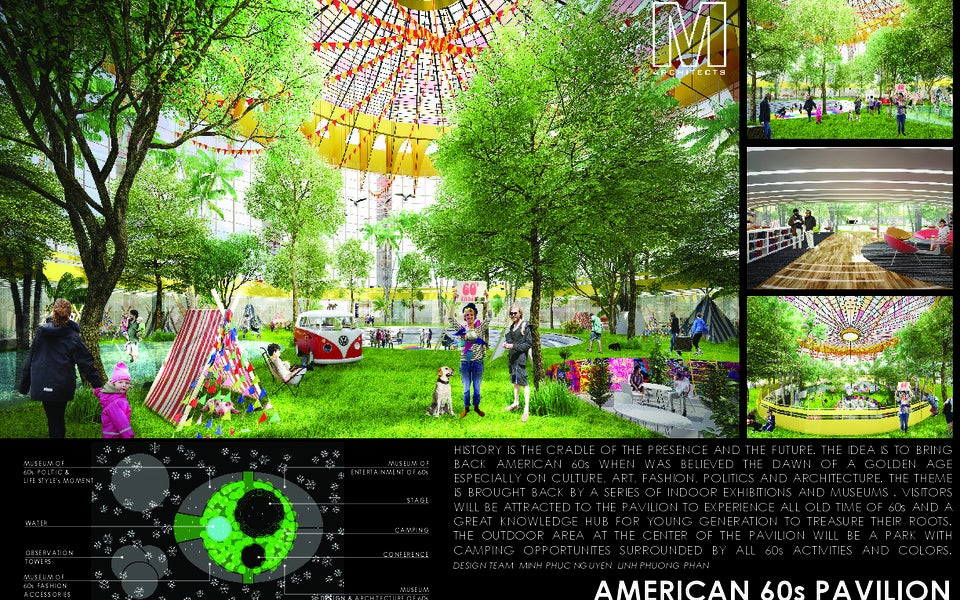 The “American 60s Pavilion” by Linh Phuong Phan aims to preserve the 1960s inside the pavilion. This means visitors could expect to see a series of museums, shops and other forms of entertainment that would allow them to fully immerse themselves in 60s culture. Since the original pavilion was established smack-dab in the middle of the 60s, it’s kind of the perfect place for such a museum. 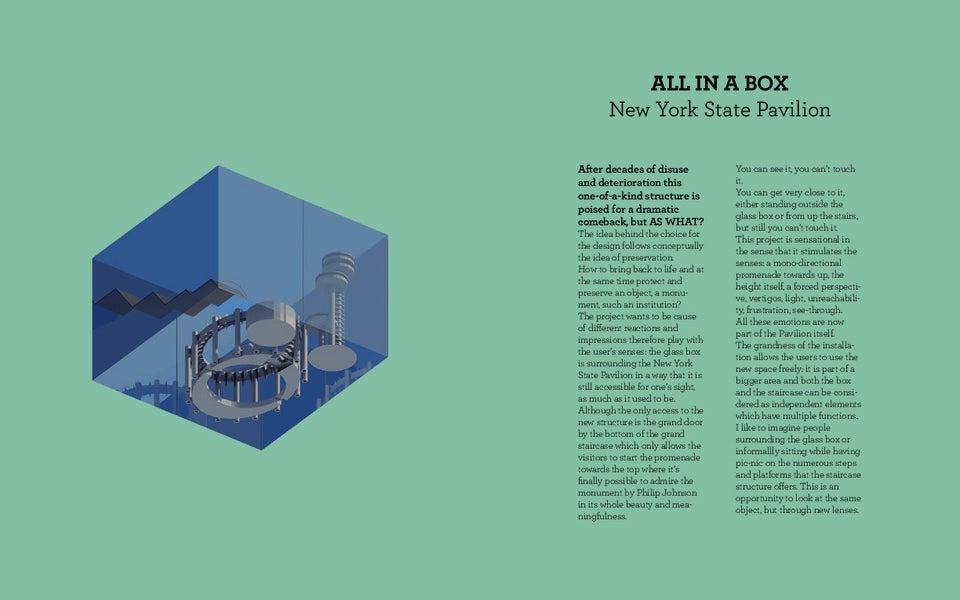 All in a Box

Luca Negrini’s “All in a Box” design is one of the most radical. Instead of creating a feature that visitors explore or interact with, “All in a Box” is literally all in a box, meaning you cannot get close to it or touch it because it is surrounded by glass. Basically, Negrini took the idea of conservation and preservation to an extreme by creating an art installation of the pavilion that will ensure its protection forever (even if that means no one gets close to it). 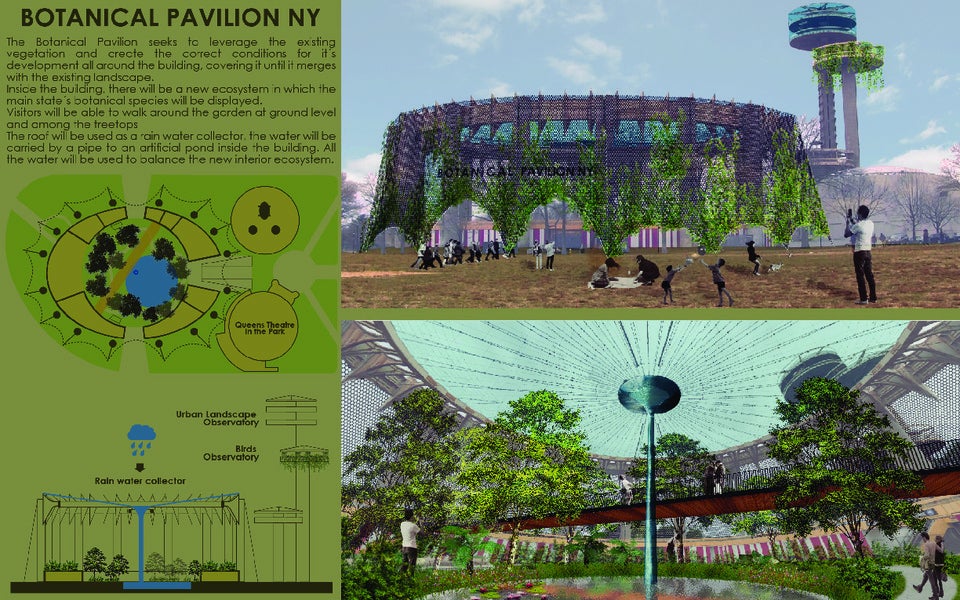 The thought behind Santiago Arenas Gomez’s “Botanical Pavilion” is to have the structure disappear into the natural landscape. Inside the center of the pavilion, a botanical garden would display various plant species as well as a lake created by rainwater from the structure’s (proposed) roof, turning the once futuristic design on its head by transforming it into a modern greenhouse. 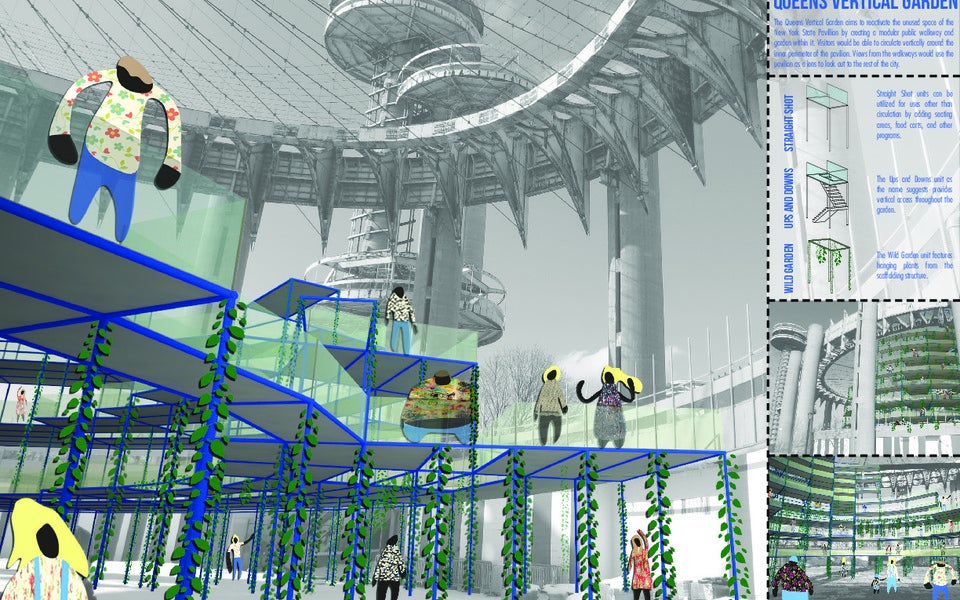 The “Queens Vertical Garden” by Steve Ramirez hopes to rework the pavilion into a pleasant vertical garden with modular platforms that visitors could stand upon to gaze at the surrounding neighborhood. This design, unlike the “Botanical Pavilion,” focuses more on the surroundings, providing a great place for tourists and locals to go for a stroll. 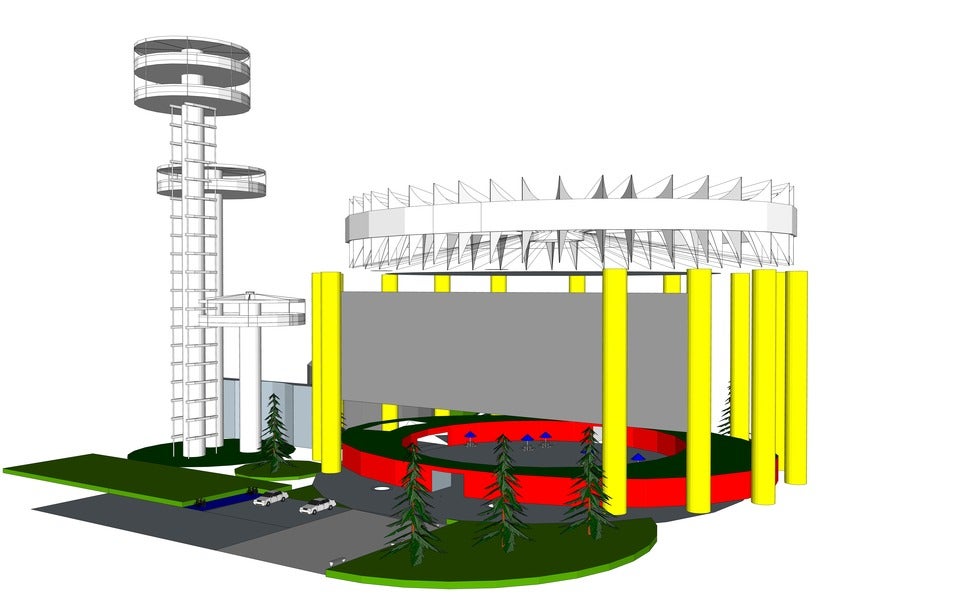 “The Outdoor Theatre,” designed by Brendan Wilson, would transform the pavilion into an open-air theatre for performances, social gathering or other events. The general idea is to reinvigorate the public’s interest in the landmark by giving them a reason to head out to it, which is different than many of the other designs that aim to preserve the structure’s history or change it outright. 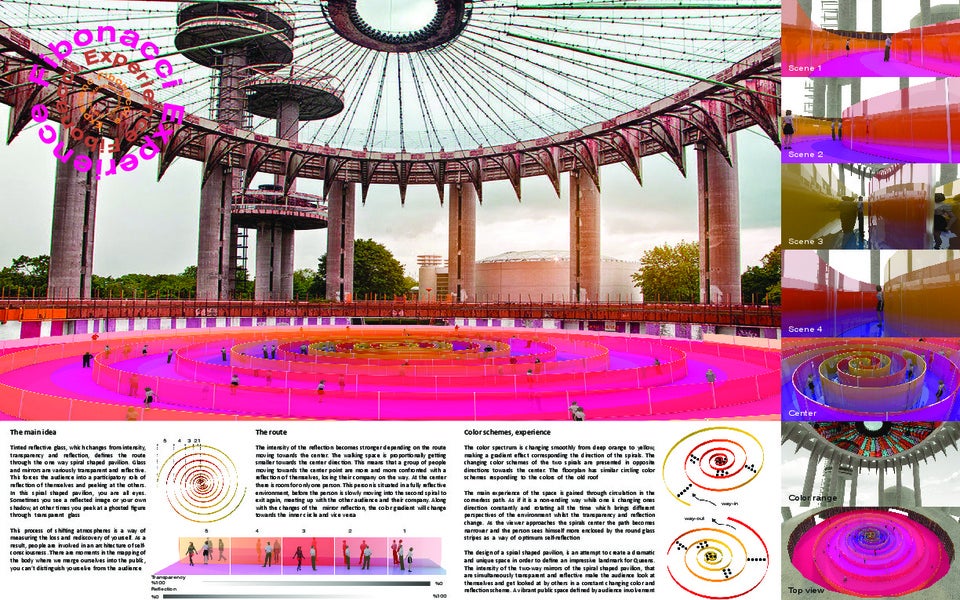 The “Fibonacci Experience” design by De Bever Architecten would provide an almost maze-like structure out of different shades of glass. Inspired by the Fibonacci sequence, this artistic design seems most in tune with what the original pavilion offered: a unique, futuristic monument meant to inspire. Little is said about what would happen with the actual existing structure. However, based on the photos, it appears they will get a little makeover yet hold onto their original aesthetic.
architecture
design
galleries
Technology