In the name of getting Americans into space and to the Moon in the 1960s, no research program was too... 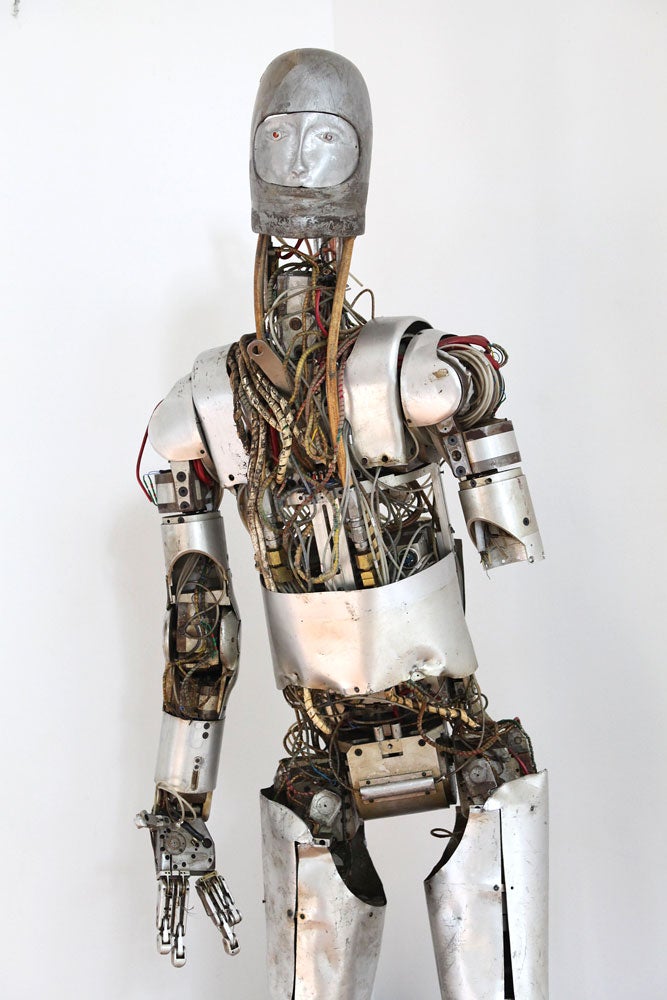 Slightly worse for the wear, the dummy remains mostly intact from the 1960s. RR Auction
SHARE

In the name of getting Americans into space and to the Moon in the 1960s, no research program was too weird, not even a mess of wires, motors, and hydraulic lines hanging from a bar in the rough shape of a man. Properly called the power driven articulated dummy, it was NASA’s failed attempt to develop spacesuits without human test subjects, and it might be one of the creepiest things the agency ever developed. Handshake with the dummy

An engineer shakes hand with the power driven articulated dummy.

There are a lot of things to consider when designing and building a spacesuit, not least of which is how easily an astronaut can move inside the suit. For engineers building the suit, this means they have to know things like how much resistance a design has, or more simply how much force it will take an astronaut to move against the pressurized layers of bladders and fabric. But sometimes a suit can be so hard to move that the astronaut or engineer testing it can get hurt, NASA wanted to take the man out of the equation and gather some key data points with a robot.

This need begat contract K6051. Eventually awarded to the Illinois Institute of Technology, the resulting program ran from May 22, 1963 to July 31, 1965 and saw creation of the power driven articulated dummy for spacesuit testing.

The 230-pound dummy was a specially designed force gauge shaped like a man so it could measure torque and resistance forces inside a spacesuit. It wasn’t a robot; it couldn’t move on it’s own and it didn’t have a balance system so couldn’t stand. It hung from a bar and was controlled by an operator at a console. But that didn’t mean it was a simple machine.

The dummy was a mess of wires, electrical components, hydraulic lines, and motorized joints arranged into the shape of a man. Together, the hardware was responsible for articulation of the joints, control of limb movement, sensing and measuring the torque forces associated with each movement, and giving the dummy structure. And everything had to work together.

Every time the operator at the console made the dummy move, a rotary hydraulic actuator provided power for the motion. As it moved, the torque force of the motion was transmitted by a cantilevered beam to an adjoining member. That member was fitted with a strain gauge that measured the force, and that measurement became the baseline for engineers. When calibrated against known torque levels, it would tell them how much force the dummy was exerting to move. In the right test conditions, they could determine how hard a spacesuit would be for the astronaut inside to move it.

But it wasn’t that simple because human movements and human joints are pretty complicated. We have simple hinge joints that work like door hinges, but we also have more complicated ellipsoidal, saddle, ball and socket, and pivot joints. Initial studies found that there was just wasn’t enough space inside the dummy to replicate these complex human joints, not to mention miniaturized components weren’t quite small enough in the 1960s to fit everything inside the dummy. Try as they might, engineers couldn’t get the dummy to truly replicate a human’s full range of motion so they made some allowances a picked the simplest way to mimic 35 of the most common human movements.

The dummy was designed such that a single joint could move on its own or the dummy could do up to four simultaneous rotations for a more complex movement; the limit of four was set by the operator’s abilities at his console. It also fell to the operator not to move the dummy in such a way that joints would get kinked. The head and shoulders, for example, could get stuck if they moved the wrong way at the wrong time, so there was some finesse involved on the human’s part.

But moving was only half the battle. If the dummy was going to test spacesuits for future astronauts, it had to approximate not only the shape of man but his size as well. So the designers took pains to make it adjustable. To fit anywhere from a fifth percentile to a ninety-fifth percentile male, the torso, limbs, and neck could be elongated so the dummy could stand anywhere between five foot five inches (think a little shorter than Gus Grissom and Pete Conrad) and six foot two inches (John Glenn was among the taller astronauts).

The dummy with it’s skin on

The outer covering of the dummy made it look like a man in a wetsuit.

Adding to it’s humanness was a skin of sorts. The dummy’s mechanics were shrouded in 1/32-inch think aluminum supported by ribs and formers. But because this skin wasn’t elastic, it was missing over the joints to give the dummy better range of motion (and a creepy unfinished look). The outer layer was a 1/8-inch think layer of neoprene foam fashioned into pants, a jacket, and booties, which made it look like a man in a wetsuit. The dummy’s head was made of fibreglass reinforced polystyrene, and the eye section was removable so engineers could easily access the mechanisms stored inside the head cavity.

For all the work that went into developing building two of these dummies, neither was ever used as intended. It turned out that the hydraulic system couldn’t lift the dummy’s extremities without leaking. Creative solutions, including putting the dummy in a wetsuit, couldn’t fix the problem and the project was eventually abandoned.

But the dummies survived. One is at the Smithsonian Institution’s Udvar-Hazy museum, and the other is up for auction, so if you have a spare $80,000 lying around, you could own this obscure and super creepy piece of history. The auction starts on September 26, 2016.