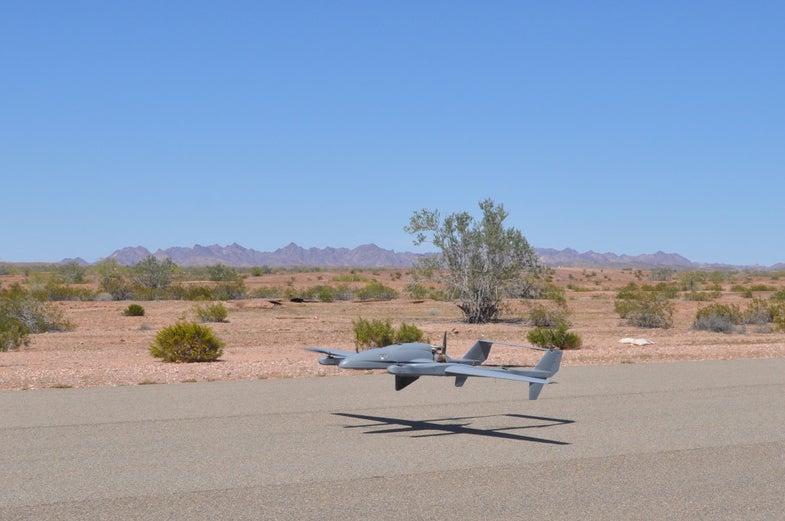 At 2:06 in the afternoon on August 9th, four propellers lifted an unusual drone into the sky. Exactly 22 hours, 29 minutes, and 38 seconds, the drone finally landed, settling back to earth at 12:39 P.M. on August 10th. It landed as the holder of a new record: the longest flight by a vertical takeoff and landing, or VTOL, aircraft. The record, claimed by Latitude Engineering’s HG-60 hybrid quadcopter, surpassed the previous record set by Boeing’s A160 Hummingbird drone helicopter in 2012. Here’s what it looks like taking off.

The HQ-60 is part of Latitude Engineering’s Hybrid Quadcopter series, where four smaller rotors lift and land the vehicle. Once airborne, a pusher propeller provides thrust, and the winged drone flies like a plane. The team at Latitude has worked on the design for a few years, refining the initial concept into a half-dozen airframes. 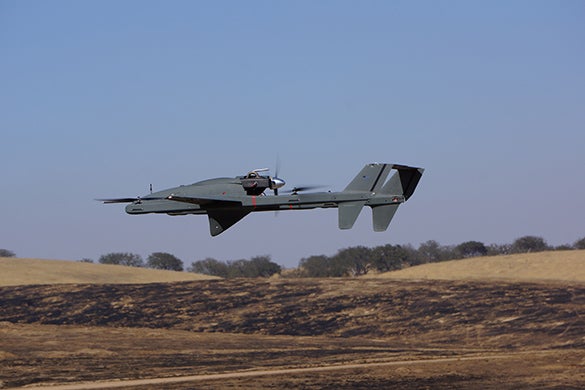 This is the HQ-60 drone that set the VTOL endurance record.

For this test, the HQ-60 carried a camera and radio like the kind it would use when actually deployed. Besides Latitude Engineering, the team was coordinated by L-3 Unmanned Systems and included Power4Flight, Trillium Engineering, and Silvus Technologies. The demonstration was part of the Naval Postgraduate School Joint Field Experimentation Program, with military and public safety professionals, including Special Operations Forces, on hand to see the technologies in action, and to provide feedback.

The previous VTOL endurance record holder, Boeing’s A160 Hummingbird, flew for 18 hours and 45 minutes in 2010. Designed to carry communications and surveillance equipment for the military, the design was prone to crashing, and the U.S. Army ultimately canceled it in December 2012. Yet, the need persists: existing fixed wing drones like the ScanEagle can fly for 24 hours, but they either need runways or elaborate catapult launchers and hook recovery systems to work.

A drone like the HQ-60, which can fly for almost as long without any elaborate infrastructure to take off or land, could provide a mobile and versatile eye in the sky to troops operating in new territory and far from bases.

Check out an earlier flight of the drone below: