Of Squirrels and Men: How We Moved Squirrels Into Our Cities

It’s hard to imagine, but before the nineteenth century, there were no squirrels in Central Park or Harvard Square or... 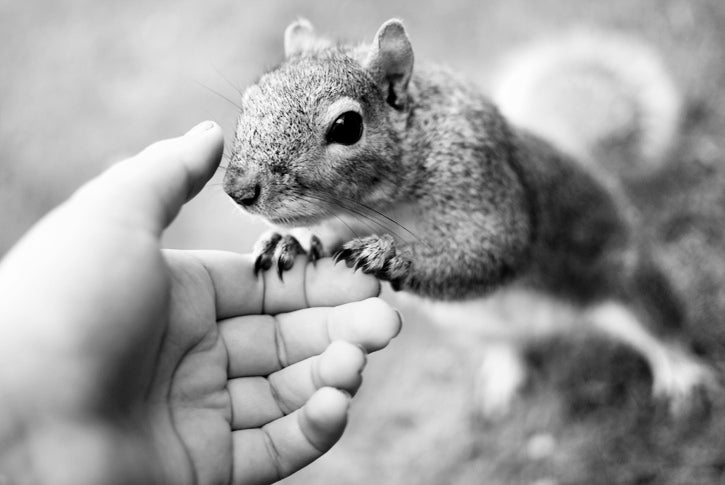 It’s hard to imagine, but before the nineteenth century, there were no squirrels in Central Park or Harvard Square or Lafayette Park. Today, squirrels are all around us, not just in parks but everywhere. They go about their business as we go about ours, invisible to one another though we tread the same terrain. But here’s something you probably didn’t know: we are the ones that brought them here, in an attempt to sweeten our metropolitan world with a little bit of natural charm. In a recent article in the Journal of American History, Etienne Benson of the University of Pennsylvania details the human intervention that made the eastern gray squirrel’s (Sciurus carlinensis) influx into cities possible.

In the late nineteenth century, as the landscape park movement gained momentum and cities created wide expanses of greenery in otherwise concrete cities, squirrels found themselves the object of serious human attention. Urban reformers, who imagined the squirrel as a rural icon of sorts, wanted to introduce the animal to places like Central Park in Manhattan in order to create “a bucolic atmosphere that was entertaining, enlightening, and salubrious.”

To be sure, squirrels weren’t the only animals introduced. As Benson explained to me in an email, they were part of a small group of creatures, including starlings and sparrows, that was intentionally brought to cities at the same time in the 1870s. However, squirrels stood out to city dwellers for three reasons: they’re a native North American species; they’re diurnal mammals that can deal with human contact fairly well; and they oftentimes look like they are begging, a characteristic that attracted those with soft hearts and extra breadcrumbs.

Following their introduction, squirrels became a cultural touchstone. “What was probably most surprising to me was in a way how surprised (and, often, delighted) urban Americans were to have them around,” Benson told me. Institutions, like Harvard University, constructed nest boxes and handed out bags of nuts in the winter time to keep the squirrels from going hungry. Meanwhile, ordinary residents also found pleasure in providing for the squirrels. Some people even became local celebrities for their efforts, like the feeders of Washington DC’s Lafayette Park, who handed out over 75 pounds of peanuts weekly.

In time, we developed a language of trust around the squirrel, Benson says. Humans were expected to be compassionate towards squirrels while squirrels were expected to be grateful for that compassion. We allowed our interactions with them to define who is one of us—the charitable, the generous, the good—and who isn’t. “Trust was supposed to be the glue that held this more-than-human society together,” Benson told me. Those who undermine this trust through teasing, injuring, or killing squirrels faced repercussions from social castigation to criminalization.

Of course, there were definitely swaths of society who didn’t appreciate them. As Benson writes, “Attitudes towards begging by squirrels ran the gamut from compassion to contempt, just as they did with regard to begging by humans.” And even our apparent generosity was not all it was cracked up to be. “The way urban Americans thought about squirrels around this time was definitely condescending and rooted in a hierarchical understanding of nature and society,” Benson explained to me. But while not wanting to overstate their importance, Benson also insisted that they were “a novel and much-commented-upon feature of the American urban scene,” one that “did change in some small way what it was like to be out in the parks or on the streets.”

Between their novelty, our (mostly) good will, the plentiful resources of the new parks, and their tendency to reproduce in droves, squirrels began to flourish in cities. By 1902, estimates suggest there were around 1,000 acorn-loving residents in Central Park alone.

Only in recent decades, with the advent of modern environmentalism, did this enchantment transform into something more familiar to us today. By the 1980s, ecology became more important than charity. Once seen as the epitome of generosity, feeding wildlife was now discouraged as harmful. Additionally, squirrel predators like the red-tailed hawk and peregrine falcon were not only allowed, but appreciated. These two elements “marked the end of the vision of moral community that had initially brought squirrels into the city,” writes Benson. “The squirrels, however, remained.”