The Microbiome and the Future of Artisanal Gastronomy

Earlier this week, the media caught the stinky wind of a rather unique art exhibit at the Dublin Science Gallery.... 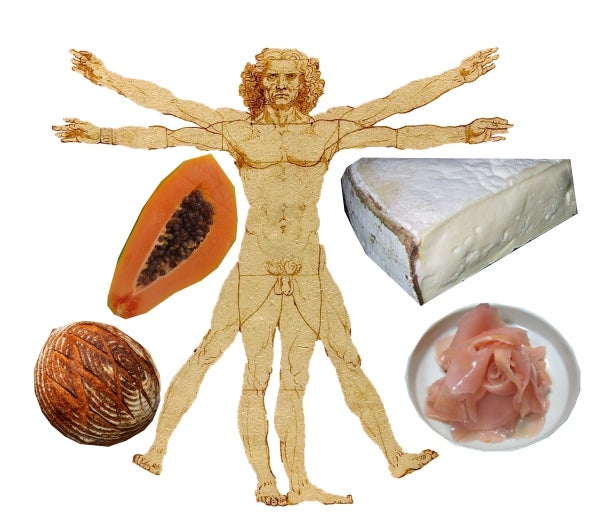 Earlier this week, the media caught the stinky wind of a rather unique art exhibit at the Dublin Science Gallery. Called SELFMADE, the installation featured a number of cheeses made by a variety of different bacteria. While this may not seem all that strange, the fact that the bacteria came from different body parts, such as the feet, the bellybutton and armpits, suggested that this was not an ordinary cheesy experience.

This isn’t the first time that gastronomists have taken advantage of the human body to create artisanal treats. In Newport, Oregon, Rogue Ales has seen good business thanks to a unique brew known as The Beard Beer, which is made using the yeast collected from the beard of the brewmaster. In a similar manner, several restaurants and bakeries in New York have turned to the microbiome of the city instill – quite literally – the taste of the metropolis in their foods.

The growing interest in using the human and environmental microbiome as a culinary collaborator may seem to be novel but in reality, this practice has been performed for centuries. Each ecological system, whether landscape or biological, has provided a means to turn raw foods such as milk, meat and flour into delicious gourmet products. What is even more interesting is that turning to microbes may have saved many from some of today’s chronic disease problems.

The most pertinent of these microbial saviours comes from a once standard staple in our diets: sourdough. This bread is made with flour that has been fermented in a mixture of bacteria and yeasts prior to baking. When performed in the traditional way, the result is a delicious loaf that is almost entirely gluten-free. In Victoria, BC, Fry’s Red Wheat Bread, is using this technique to create breads that even celiac patients can eat.

Studies on the bacteria contained in the sourdough cultures have been numerous and shown that there are several different types contributing to the reduction of gluten that benefits celiac patients. In one such study from 2012, the actual source of one of the predominant strains, Lactobacillus reuteri happened to be intestinal in nature. While there was no correlation between the other types of bacteria found in the culture and the human gut microbiota, the authors did suggest that the human gut might be the perfect place to find starter cultures.

The benefits of sourdough may seem remarkable but pale in the context of the benefit of including fermented foods in the diet. In 2006, a group from Puleva Biotech in Spain revealed that a diet that did not include fermented foods led to a reduced immune function and an increase likelihood of preventable infections. Last year, a group from the David Geffen School of Medicine in Los Angeles demonstrated how incorporation of a fermented milk product could modulate brain activity and relieve emotional stress. One of the most intriguing benefits came from the Ohio State University in 2010 in which the authors showed that a fermented papaya preparation helped to heal wounds associated with diabetes.

What links all the benefits of these fermented foods is the nature of the bacteria contained within the starter culture, most of which are probiotic. Researchers are still learning which strains are associated with health although the work may reveal the best options can be found not in the lab, but inside us.

Each of us has an individual microbiome consisting of thousands of different types of bacteria. Many of these are also associated with the development of fermentation. Through identification of these bacteria contained in our guts and on our bodies, a personal starter culture could be developed, which could then be used to make individualized artisanal foods. The various lactobacilli could easily help to make yogurts, sourdough and even sausages. A selection of bifidobacterial strains could help to ferment various cereals and soy products. Other bacteria, such as Propionibacterium from the face, Corynebacterium from the armpits and Enterococcus from the nostrils may be harnessed, cultured and then used to produce individualized fermented foods including cheeses, pickled vegetables and dry sausages.

The premise may seem outrageous but research hints that this may soon be a part of a personalized healthy diet. At the National Taiwan University, a team of researchers examined Lactobacillus strains isolated from both picked cabbage and the feces of breast-fed infants. They found the bacteria from the babies were superior to those found in cabbage. They were more stable in the environment; they were more competitive against pathogens; they survived better over time and offered better support once ingested. The authors suggested that when it comes to finding optimal fermented foods, the best place might indeed be the human body.

For the moment, personalized gastronomic fare is still just an idea with only a few options available for observation and tasting. However, over the coming years, there will no doubt be more culinary curiosities appearing as more people turn to their own bodies for culinary inspiration. Whether this will ever become a fad, no one can tell, but in a world where odd eats can lead to a windfall of attention and purchases – the cronut anyone? – then we can be sure someone out there will give it their best try.