Friends Who Are Unrelated Share A Surprising Amount Of DNA

Friends really are the family you choose 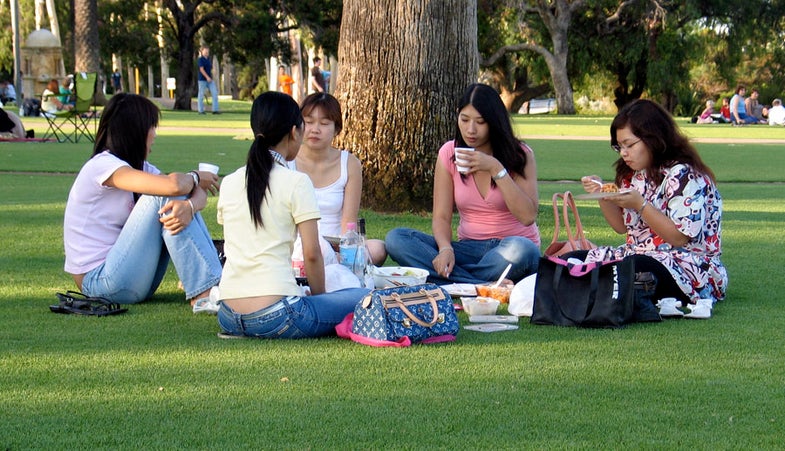 You and your best friend have a lot in common: your favorite food, your taste in music, maybe your hometown. But a new study finds that your similarities may even extend to a genetic level.

The researchers, James Fowler of University of California San Diego and Nicholas Christakis of Yale University, used data collected during the famous Framingham Heart Study, running since 1948 in the small town in Massachusetts. When participants shared their DNA with researchers for the study, they shared lots of other information, too, including who they hang out with. “Because the study started in a small community, many people that were named as friends, also happened to be involved in the study,” Fowler explained to the BBC. He and Christakis looked at almost 2,000 participants and identified about 1,400 pairs of friends.

The findings, published this week in the Proceedings of the National Academy of Sciences, show that people share 0.1 percent more DNA with their friends than with perfect strangers. That’s about the same genetic similarity you share with your fourth cousin.

So why might this be the case? The study authors had a few theories. Maybe people with similar genes seek out similar environments and then meet others like them. Or, people who share DNA could have comparable skill sets, so they work together better over long periods of evolutionary time.

The study has a few limitations. For one, Fowler’s team didn’t look across the entire human genome–they compared only about 500,000 of each person’s three billion DNA base-pairs. Even though the researchers excluded anyone who was related in any way, Framingham’s population is made up mostly of descendants of Italian and Irish immigrants, so the genetic variation may not be large enough to make a broader conclusion. Evan Charney, a professor of public policy at Duke University, said that, to maintain the study’s integrity, the researchers could only study a population in which individuals are completely unrelated to one another, which is admittedly very difficult to find. Rory Bowden, a statistician at the Wellcome Trust Centre for Human Genetics in Oxford, also had reservations about how countries of origin could affect the communities that people seek out, such as church groups and cultural associations, which would align people with similar genetics.

But others, including the researchers, stand by the conclusions. Findings such as this, Fowler notes, could influence theories about how altruism has developed over evolutionary time.

Of course, Fowler and Christakis don’t have all the information yet. Interestingly, they found that the biggest genetic similarities were found in friends’ sense of smell. They’re not quite sure why that would be the case, but future studies may help them sniff out the answers.