Satellites Could Predict Floods Months Ahead Of Time

You can look at the crick and read the almanac, but that ain't the best way to predict when a flood is a-comin'. 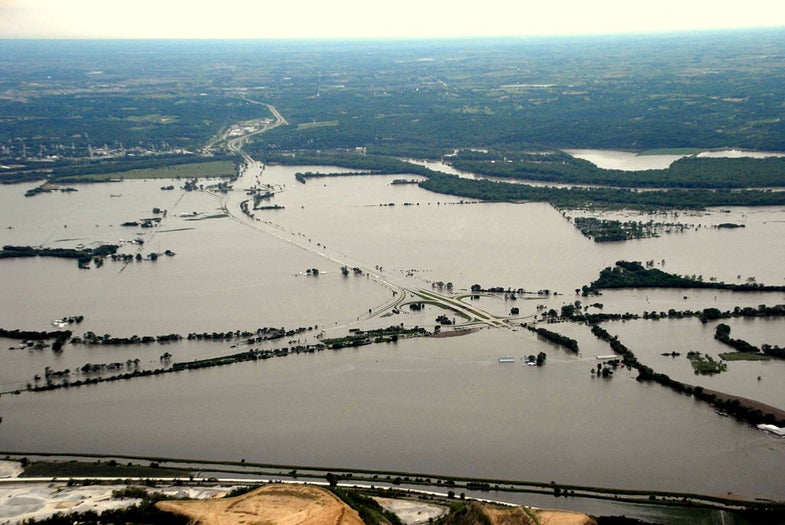 In the spring and summer of 2011, the Missouri River swelled past its banks, reaching a high-water mark not seen in decades. Flooding persisted from May to August, causing $2 billion in damages and killing five people. Using this disaster as a case study, scientists have created a method that can predict flooding based on satellite measurements of a river basin. By looking at historical measurements from the winter of 2010 to 2011, the researchers’ model strongly predicted this major flood, five months ahead of time. The hope is that the same method could provide flood warnings many months in advance in the future.

The data was collected by twin satellites, from NASA’s Gravity Recovery & Climate Experiment (GRACE) mission, which can measure water on the surface of the Earth. The model uses this information to predict how much of that water will flow into the river valley in the future, and hence whether flooding is likely. “Just like a bucket can only hold so much water, the same concept applies to river basins,” study lead author J.T. Reager, an earth scientist at the University of California, Irvine, told LiveScience.

But there are reasons not to get overly excited at this instant. For one, the model has to date only been used to analyze past floods, although the researchers hope to apply it to future scenarios. There is also currently a three-month lag time to get the data from the GRACE satellites, meaning that we can only make predictions for about two months in the future, which is about the same warning time given with current practices (although NASA is working to get GRACE data within 15 days of collection in the future, LiveScience noted). The method also cannot predict flash floods from rapid downpours.

Furthermore, people don’t always listen. The National Weather Service, for example, starting warning people about impending Missour-river flooding in April (though this almost certainly saved lives, according to the agency). A more intractable problem is the enormous amount of buildings, towns, roads and other infrastructure built on the flood plains of the Missouri, the Mississippi, and rivers around the world–which by definition, occasionally flood.