Watch This Squishy Robot Get Run Over By A Car 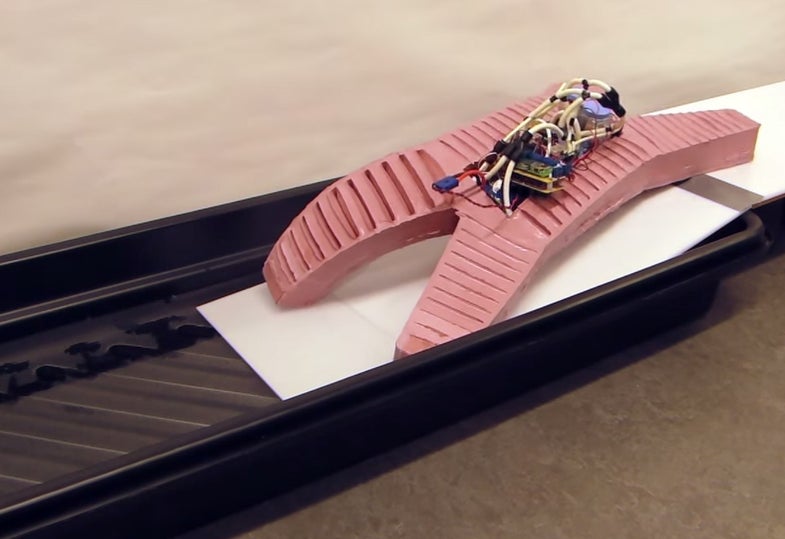 The archetypical robot is a man of metal, a harsh mechanical construct contrasted sharply with the soft fleshiness of the humans that built it. A team of engineers, led by Michael T. Tolley of the Harvard Microrobotics Laboratory, created instead a soft robot. Using a flexible body, the robot moves like a flailing starfish over all terrain.

Their work was recently published in the journal Soft Robotics, and curiously it highlights something the robot lacks: a tether. While previous attempts at soft robots used tethers for better communication with their flopping mechanical beasts, if a robot is to truly navigate the world, it can’t have anything holding it back. This new robot, a flopping pink “X”, has an optional electrical power tether, but can use a battery pack as well.

The robot’s body is mostly silicon, with hollow glass beads added to lighten it. Inside, a series of cavities and tubes formed six “pneu-nets“, or pneumatic network inside the robot. Actuators inside the central part of the robot inflate and deflate these nets, making the robot move. Controls were mounted on an Arduino, and the soft robot had a GoPro camera as a visual sensor.

DARPA funding in part supported the design of this robot. While there’s no immediate application yet, a robot that can survive in ice, over fire, and under great pressure has potential as a future rescue tool.

Watch it squirm over fire, across ice, and survive under a car tire below: