A new robotic jellyfish is powered by hydrogen, and could theoretically never run out of energy as it pulses through...

Fig. A is the computer design for Robojelly. Fig. B is the silicone bell Robojelly, powered by hydrogen fuel, out of the water. The pins on the bell are used for deformation. Tadesse et al/IOP Publishing
SHARE

A new robotic jellyfish is powered by hydrogen, and could theoretically never run out of energy as it pulses through the sea. It’s designed to work as a search and rescue or surveillance ‘bot for the U.S. Navy.

Researchers at the University of Texas at Dallas, Virginia Tech and other institutions have been studying the mechanisms of jellyfish propulsion, which take place in a couple of ways. Muscles inside the jellyfish bell contract, and the bell folds in on itself like a closing umbrella. This contraction pushes water out from under the bell, propelling the jellyfish forward. The bell regains its ovoid shape when the muscles relax, and the cycle repeats.

Creating a soft robot that can mimic this motion requires special materials — rigid skeletal structures can’t replicate the graceful flexing of an invertebrate. To do this, lead researcher Yonas Tadesse of UT Dallas and colleagues used nickel-titanium shape memory alloys, which can revert back to their original shapes after being contorted. They coated multi-walled carbon nanotubes in a nano-platinum catalyst powder, which creates heat when exposed to hydrogen and oxygen. Then the nanotubes were wrapped around the shape memory alloy. The exothermic reaction between the metal and the water sparks the shape memory alloy to change its shape, contracting and moving forward. As the artificial muscles relax, the shape memory alloy reverts back to its original form — in this case, one of eight bell segments.

This means Robojelly can harvest its power directly from the water, requiring no external fuel source or energy storage. It is based on the jellyfish Aurelia aurita, the moon jellyfish.

For now, Robojelly is being tested on a tether in a water tank. The researchers say they need further development before it can work on its own in open water.

The paper appears in the IOP journal Smart Materials and Structures. 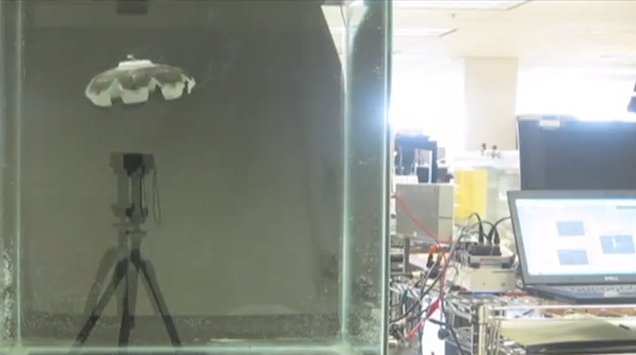