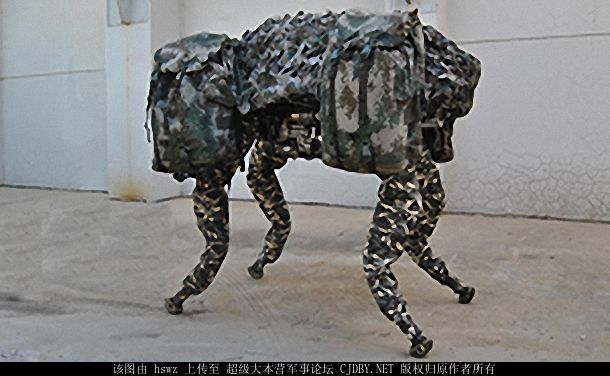 Two years ago, Boston Dynamic’s four legged Big Dog robot was recruited as the U.S. Army’s Legged Squad Support System (LS3) tech demonstrator. But in the meantime, China has not been standing still in the field of bionic robots. At a late August expo on unmanned technologies, NORINCO provided the first official look at a Chinese quadruped robot, officially named Mountainous Bionic Quadruped Robot (unofficially, people have dubbed it “Da Gou”, which is Mandarin for Big Dog). 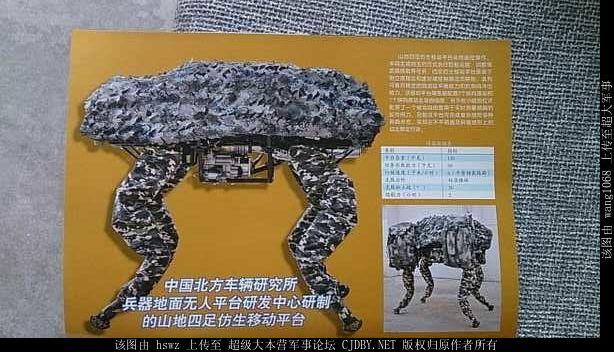 This exhibition information card lists some of the specifications for Da Gou, including its intended infantry resupply, support, rescue and recon missions.

Developed by the NORINCO Vehicle Research Institute of arms manufacturer NORINCO, this “Da Gou” weighs 130kg by itself and can carry a 30kg payload. Da Gou can trot at a speed of about 6 kilometers an hour, and can handle slopes of up to 30 degrees. The Da Gou’s size speed and slope climbing capability is similar to that of Big Dog (110 kg, 6.4 kmh and 35 degrees), Big Dog and LS3 carries 150-300kg of cargo.

The smaller carrying capacity of Da Gou indicates that the NORINCO program is still in the very early stages of technology demonstration; future models will likely have greater carrying capacity, speed and batteries that exceed the current two hours of operation. Similar to LS3’s military mission, “Da Gou” is intended to carry supplies alongside infantry in mountainous and urban terrain, the placard at the exhibit also indicates that Da Gou is intended to serve in disaster relief efforts and conduct battlefield reconnaissance as well. And just like LS3, “Da Gou” could potentially carry weapons in the future.

Currently there is no information yet on what happens if the Da Gou robot is abused by its maker, as happened in the famous YouTube clip of its American equivalent getting kicked by a mean human engineer.