The design could lead to better surgical tools 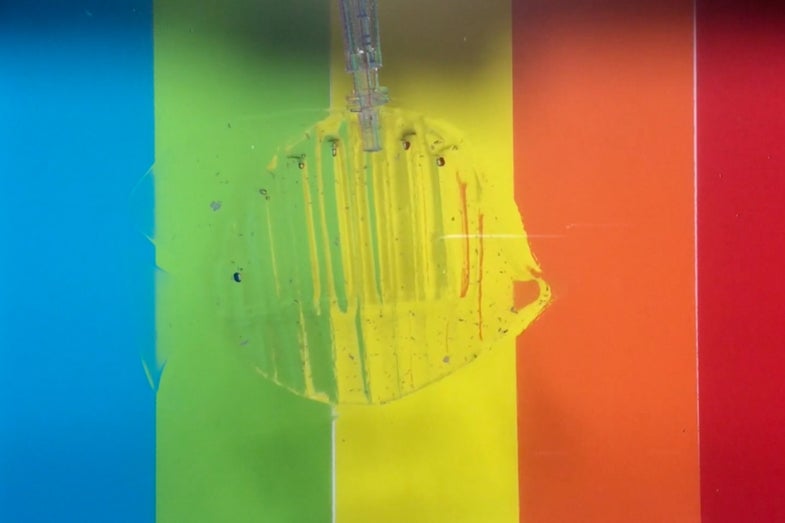 The totally translucent robot caught its prey entirely unawares. Soft, flexible arms wrapped around the fish, enfolding it in a squishy, mechanical embrace—until the robot relaxed, unfurled its arms, and let the startled prey swim away. The multi-limbed machine is a soft robot, and while it may just be annoying fish in a lab today, it offers a promise of medical innovations for humans in the future.

Hydrogels are the key to this robot’s fishing acumen. Flexible, chambered tubes are pumped full of water to contract tightly, or vented to release the water inside. That means they can quickly—and invisible—latch onto something underwater, like the unsuspecting fish used in this test.

“Hydrogels are soft, wet, biocompatible, and can form more friendly interfaces with human organs,” says Xuanhe Zhao, associate professor of mechanical engineering and civil and environmental engineering at MIT, who led the project. The goal isn’t to make a perfect, invisible fish-catcher, but to build soft, gentle hands that can help surgeons when they’re working inside squishy, delicate human bodies.

Many soft robots are designed to work in water, which is a natural fit for floppy machines, but not all do. Last year, a team at MIT built a soft little walking robot, and in 2014 Harvard showed off a soft, flopping land robot, that remained undamaged even after a car ran it over.

Soft robots may be the gentler side of modern machines, but don’t count them out for harder tasks. The MIT study was funded in part by the Office of Naval research, which can probably see a use for both better surgical tools and machines that are invisible under water.

Watch the softopus in action below: