Get Ready For A Soft Robot Showdown In April

The machines are coming and they are floppy 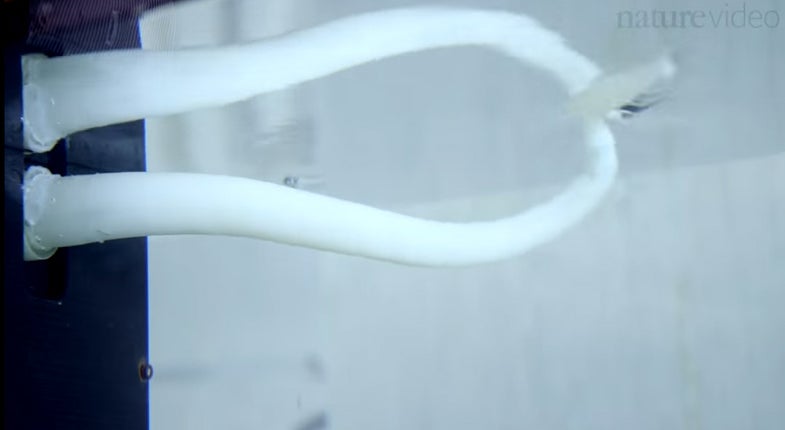 Bones are a constraint. Sure, the rigid structures give us everything from from powerful legs to crushing teeth, at the modest cost of limiting the movements the body can make. This matters less to humans, as we’ve adapted our world pretty well to accommodate the constraints of our bones, but it matters a lot for robots, who often struggle and stumble when forced into a rigid, human frame. There is another, gentler way: instead of making robots that imitate the rigid bodies of humans, we can make them soft, with flexible tentacles like an octopus.

Tentacles work just fine under water, with buoyancy doing much of the fighting against gravity that rigid bones do on land, so under water is a natural place to test such a robotic limb. This one, from Matteo Cianchetti of the BioRobotics Institute in Italy, is one of ten soft robot designs competing in the RoboSoft Grand Challenge at the end of April. The robots will have to race across a sand pit, open a door by its handle, grab a number of mystery objects and avoiding fragile obstacles while under water. It’s a first coming of age for the young but growing soft, weird side of robotics.

With gusto, researchers have made many, many robotic tentacles over the years, from strong gripping ones to tiny squishy ones. Many tentacles rely on inflation to change shape, with different fluids pumped in and out of their tubular lengths. Some others just flop around for fun. They’ve crawled around in water-filled tanks and gently lifted flowers without crushing them.

Underlying all of these weird limbs is future possibility; soft tentacle arms with fine motor skills could make good surgical tools. While soft robots can do many things besides surgery, like play beer pong or keep walking after a car runs them over, surgery is a highly practical use for the promising technology.

Watch a short video about soft robots from Nature below: