The DF-41 is one of China’s most important new ballistic missiles, whose development has deep ramifications for strategic deterrence. And... 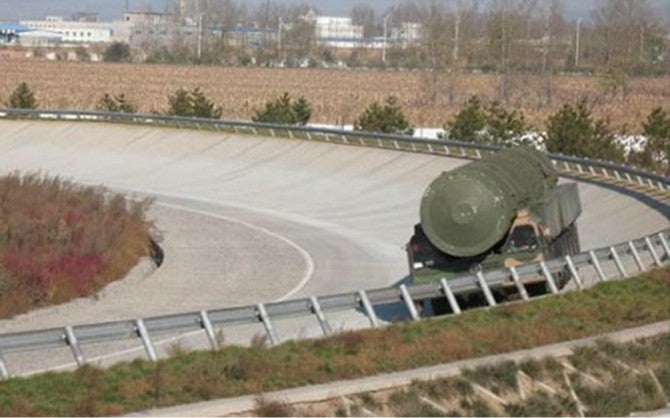 The DF-41's suspected launch vehicle has been circulating on the Internet for a while in low resolution pictures. This image of the TEL vehicle at a vehicle test track dates back to 2009-2010. RAJ47 via China Defense Forum
SHARE 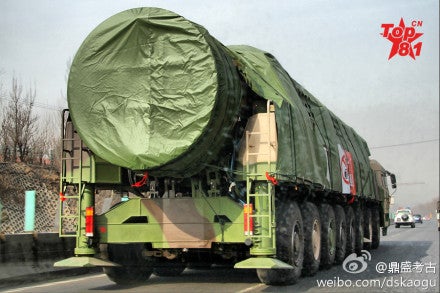 Shown here is the all terrain launch vehicle for the DF-41 ICBM, which has 16 articulated wheels. Chinese military vehicles, even those associated with sensitive projects like the DF-41, can be seen on Chinese highways while under transportation.

The DF-41 is one of China’s most important new ballistic missiles, whose development has deep ramifications for strategic deterrence. And in an illustration of the challenges of keeping secrets in the Internet age, it recently popped up on a Chinese environmental website. 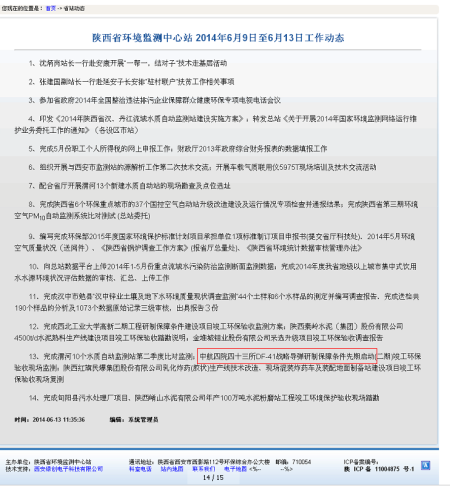 The Shanxi Province’s environment agency mentions a list of industrial projects that it has completed water quality assessments for. At number 13 is the 43rd Academy of the 4th Research Institute of AVIC, China’s state owned aerospace corporation.

A July 2014 webpage for environmental regulation of water quality in Shaanxi Province notably identified the enigmatic DF-41 Intercontinental Ballistic Missile (ICBM) by name. The 43rd Academy of AVIC’s 4th Research Institute specializes in building composite components for Chinese missiles like the DF-31 ICBM. Several hours latter, the website was temporarily taken down and all references to the DF-41 were promptly scrubbed. This eagerness of Chinese censors to remove the mention suggests that the Second Artillery, the military service responsible for China’s strategic arsenal, is not ready to publicly unveil the DF-41.

The DF-41’s suspected launch vehicle has been circulating on the Internet for a while in low resolution pictures. This image of the TEL vehicle at a vehicle test track dates back to 2009-2010.

The DF-41 ICBM is believed to have a range between 12,000km to 15,000km, which would make one of the world’s longest ranged ballistic missiles. It has undergone a protracted research and development effort for nearly two decades, with intermittent mentions in Chinese and international media of its 16X16 transport erector launch (TEL) vehicle appearing on Chinese roads, as well as a test fire of the DF-41 back in 2012. The 2014 U.S. Defense Department’s report on the Chinese military stated that the DF-41 can potentially carry multiple independently targeted 150-300 kiloton yield thermonuclear warheads. Compared to China’s currently largest ICBM, the silo based DF-5, the DF-41’s all terrain mobility would make it exceedingly difficult for enemy forces to destroy it before launch, adding another layer of survivability for the Second Artillery, on top of current anti-access/area denial tactics.

Expected to be operational in the 2018-2020 timeframe, the DF-41 will supplement the smaller DF-31 and DF-31A ICBMs. As well as modernizing China’s nuclear deterrent, the DF-41will also improve China’s potential for long range conventional precision strike. In addition to carrying nuclear payloads, the DF-41 could be modified to boost hypersonic gliders like the WU-14 across intercontinental distances. In a decade’s time, a mobile hypersonic launch vehicle based on the DF-41 could deliver hypersonic gliders at targets on U.S. soil, provided a deterrent response to potential strikes on the Mainland presently conceived as part of the US’s Air Sea Battle concept.