What’s In Your Dog’s Dinner?

Some companies want to put mashed-up crickets into pet food, but the FDA has a bee in its bonnet about using insect protein as an ingredient. 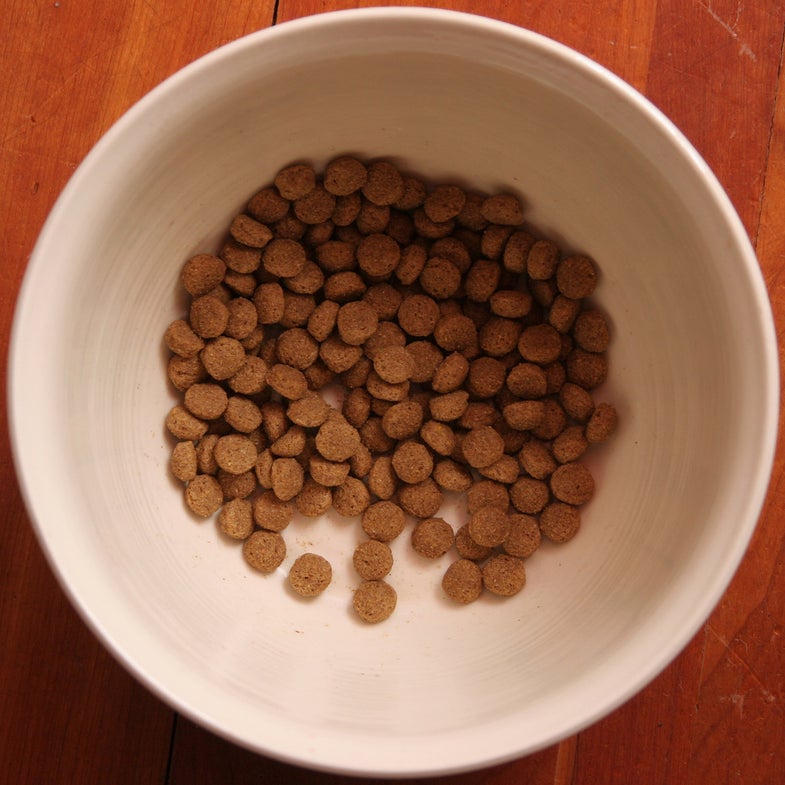 When you crack open a can of dog food, how often do you wonder what’s inside? Peter Kaufman probably thinks about it more than most people. He is the “Chief Dog Wagger” at Buddy’s Kitchen — a premium dog food manufacturer in Ontario that sells kibble across the USA and Canada.

Buddy’s Kitchen makes organic and natural products from locally sourced ingredients for the discerning ‘pet parent’. So it might be a bit surprising to learn that they are planning to use crickets in a new range of dog chews. As he talks excitedly on the phone to me about his plans, it is clear that Kaufman is fully at ease with being one of the first dog food manufacturers to embrace the idea.

In recent years there’s been a resurgence in the idea that people should eat bugs, and insect growers are hoping that the pet food market could be a good segue to the dinner plate. Eating insects would have smaller environmental impacts and fewer of the ethical problems associated with other forms of meat, says Kaufman. According to the U.N.’s Food and Agriculture Organization, crickets are twice as efficient at converting energy from food into meat compared to chicken, four times more efficient than pigs, and twelve times more efficient than cattle—meaning crickets eat less food to produce each gram of protein. And compared to beef, every gram of insect protein generates about 100 times fewer greenhouse gas emissions. Insects even produce less dung, which can cause all sorts of environmental damage.

Thankfully, dogs don’t share most people’s disgust at eating insects. According to Kaufman, they’ll happily gobble down kibble made from ground-up insects.

Kaufman is working with a local insect farmer called Next Millennium, which already raises crickets and worms for human consumption. Jarrod Goldin from Next Millennium says that its farmers wear protective clothing and that they have surprise visits from health inspectors. The crickets are fed no antibiotics and during processing they are washed, oven-roasted and milled into a fine flour in conditions that are as clean as a scientific lab.

And Next Millennium is not the only insect producer in North America that’s looking to farm insects on a large scale for use in pet and farm animal feeds. Several other companies say they’re doing similar research, including,World Ento of Austin, Texas, which told me they are working with three different dog food start-up companies.

But there is a fly in the soup. The FDA says that using insects in dog food is currently illegal in the U.S.

Although insect growers point out that humans have been eating insects for thousands of years, the FDA does not recognize insects as food. That means insect protein would need to be regulated as a food additive, and would need Generally Recognized As Safe (GRAS) certification. For GRAS certification, food manufacturers will need to supply lots of scientific evidence that cricket flour is both safe and suitable for the intended animal.

“At this time, no food additive approvals have been issued for use of any type of insect material as an ingredient for any purpose in animal foods,” the FDA told me in an email. “Unless such a food additive petition is approved, it is not legal to use insect protein in dog and cat food in the United States.”

Which ingredients can be used in dog food is a murky and complex issue. Many of the things that are allowed are things that we would not normally associate with feeding anything — including products from animal rendering plants, which are factories where animal bodies from various places go to be boiled up and made safe for other uses.

In a recent Slate article, writer Jackson Landers investigated the ingredients in dog food. He concluded it could contain not only brains, guts and other leftover parts from meat animals, but also animals from zoos, diseased farm animals, roadkill, out-of-date meat from stores and even other pet dogs. (In response, the FDA tested a small sample of dog foods and found no evidence of dog DNA.)

Which ingredients can be used in dog food is a murky and complex issue.

Glen Courtright, president of insect grower Enviroflight from Yellow Springs, Ohio, told me that his company is also working to ensure that insects are added to the permitted list of animal feed ingredients. His company is vying for an independent GRAS determination. In other words, companies can make their own food additive safety assessments and then sell the product to consumers. The FDA reserves the right to remove the product from supermarket shelves, but that only happens rarely. Self-affirmed GRAS status is the reason some companies in the U.S. are already marketing human foods that contain cricket flour.

Peter Kaufman at Buddy’s Kitchen is not worried about the current FDA policy and believes that insects will be allowed in pet food “sooner rather than later”. Kaufman says that he employs a Board Certified Animal Nutritionist who has been testing the insect protein for suitability in dog food and has been impressed with the results.

In Europe there is now a dog food which contains 100 percent insect protein that is specifically designed for dogs with allergies to other animal proteins. North America is still some way off from this, but Kaufman says he’s hoping to launch an insect-based dog treat product in the USA and Canada in early 2015. And he will not be hiding the ingredient away–he thinks insects will not only appear prominently on the label, they’ll be a major selling point.