You should start eating bugs. Here’s how.

‘Hakuna Matata’ isn’t the only thing you can learn from Timon and Pumbaa. 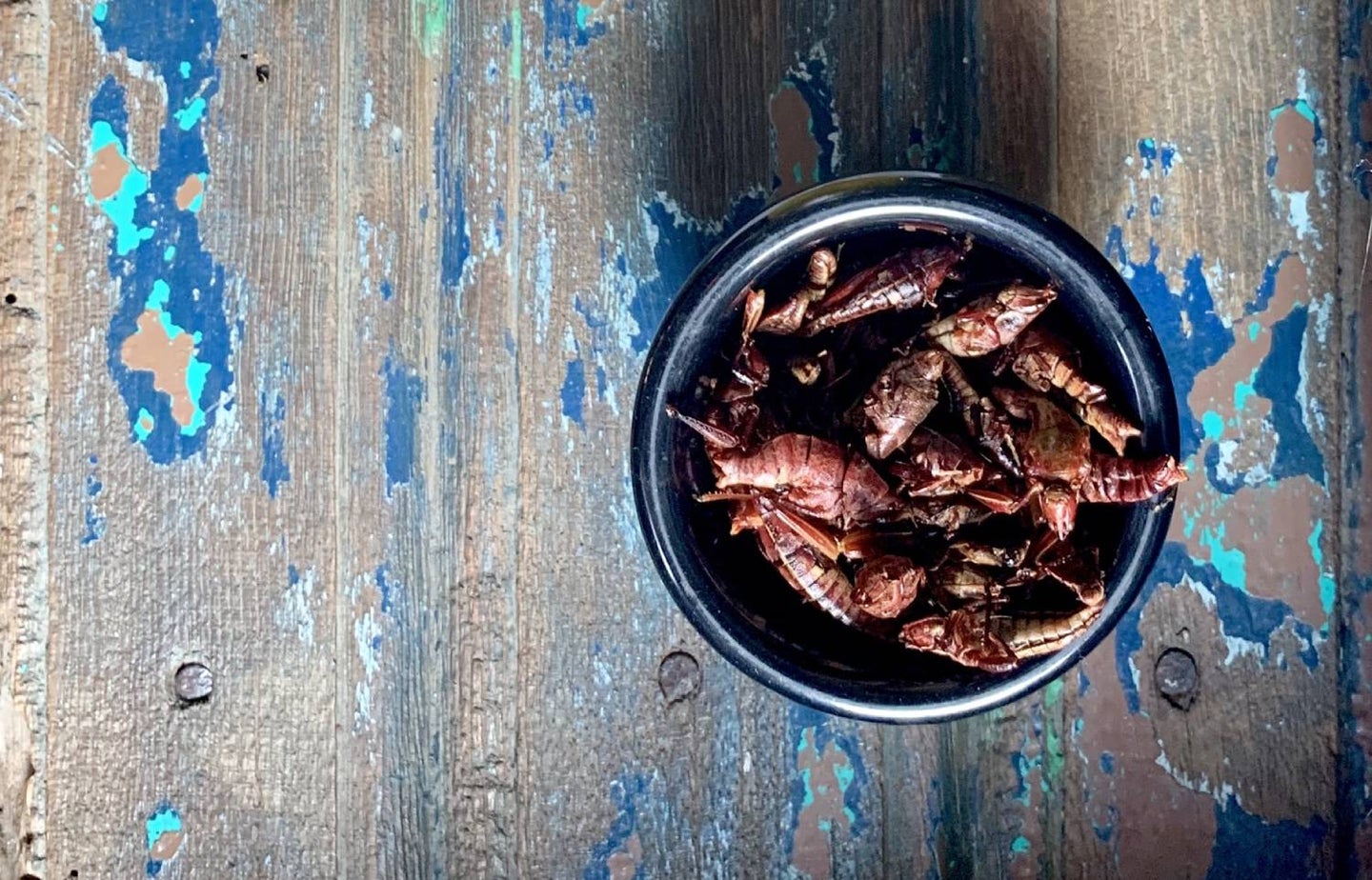 Remember when your grandpa wouldn't eat sushi because only bears ate raw fish? Well, this is kind of the same. Jonathan Beckman / Unsplash
SHARE

Entomophagy—the technical name for the more mundane “eating bugs”—has been around for ages. It’s a cornerstone to different cuisines around the world, including those of Latin American, Asian, and African countries. But there’s no sign of it in Western culture, and least of all in the US, where consuming insects is something you’d most likely only see on Fear Factor.

But it doesn’t have to be. Insects are the basis of many food webs in nature, are very rich in nutrients—including protein and all nine essential amino acids for human development—and can be delicious. Yes, you read that right—bugs are actually tasty.

Introducing them to your diet doesn’t mean serving a tarantula on a lettuce leaf or biting into crunchy crickets right away (though, you could because, yum). If you’re curious about the insect-protein movement and wonder how you can start incorporating it into your menu, know that it’s easier than ever, and that there are experts out there who’ve tested the waters and want to show you the way.

As a species, we need to rethink the way we grow and produce what we eat, and there are two very important reasons for that—climate change and food security.

In the last decade, the global meat industry has been questioned for being responsible for at least 20 percent of manmade greenhouse gas emissions and overall, being an unsustainable practice. Raising cattle requires a lot of space and water, and more room for cattle means less trees, which in turn means a diminished natural capacity of the planet to process carbon dioxide. Also, cows and other ruminant animals fart a lot. The inescapable conclusion is that those delicious steaks are one of the least environmentally friendly ways to nurture our bodies.

Plus, there are a lot of bodies to feed on Earth. In 2018 there were 7.5 billion people in the world, and 815 million of them suffered from chronic undernourishment, according to the World Health Organization and the Food and Agriculture Organization of the United Nations. By 2050, the UN estimates the world population will reach 9.8 billion, requiring us to almost double our food production. Considering we’re already running out of space to farm, famine rates are expected to rise beyond what we’ve seen so far.

Most people in less food-secure areas depend on meat as their main source of protein: It’s readily accessible and cheap. But bugs are way more efficient. In 2013, the FAO published a report attesting to the benefits of entomophagy, and how this practice may be just the answer humanity is looking for. The report highlighted the rich nutritional content of bugs, which even though it varies from species to species, can have up to twice the amount of protein as beef and 1.5 times the amount of protein as fish and poultry. Their tiny size is also a plus.

“Insects are definitely in the lower end of environmental impact,” says Andrea Liceaga, an associate professor of food science at Purdue University’s College of Agriculture. “They don’t need a lot of water, nor a lot of space or food, and their feed to growth ratio is almost 1 to 1.” That feed conversion, as it’s technically known, is more efficient than poultry’s 2 to 1 ratio, and way better than cattle’s 6 to 1.

Bugs have another upside—they can be hacked to improve their nutritional content even further. Researchers have long been experimenting with insect flours to make them blend better with other ingredients such as carbohydrates and fats. Though there are many ways to do this, enzymatic hydrolysis, a process in which enzymes and water are used to break down complex protein chains, is one of the most common. This boosts the flour’s nutrient count by rendering the chitin—the main compound in insects’ exoskeletons—soluble, and allowing more protein bits to bond with other ingredients.

One thing is true—becoming an insect foodie is all about a shift in culture. No matter how beneficial science finds bugs to be for dining, if people don’t want to eat them, you can’t force them to.

“The true mass adoption has to start with ‘This tastes freaking delicious.’ How do you get people to eat if not through it tasting good?” says Joseph Yoon, chef and founder of Brooklyn Bugs, a catering company and education platform in New York that serves an entire menu featuring insects.

Other than experimenting with new recipes like black ant ceviche, Yoon travels across the country talking to people (including kids) about eating bugs. Research shows Western cultures don’t have positive views on entomophagy, labeling it as “famine food” that should only be considered when traditional resources are scarce. Still, Yoon finds his audiences are curious about the practice, especially when he offers up samples. Climbing the ladder from cricket bars to entire scorpions takes time, the chef explains; not many folks get to that point, but he insists that watching people conquering their fear is highly rewarding.

OK, I’m intrigued. How do I start?

The first step to eating bugs is to shop for some. A warning though: The edible-insect market is still very small. Retail options are limited, and they’re usually pricier than buying chicken or ground beef by the pound at the grocery store. This might change in the near future—projected growth for the industry worldwide is expected to be up to 47 percent by 2026—but in the meantime, don’t try to compare bugs and meat side by side.

“You can’t look at crickets in the same manner that you look at steak, because you’re most likely not going to eat a pound of crickets at one time. Nor do you need to,” says Yoon, adding that most people gradually add insects into home-cooked dishes. So even if you spend the same amount of money on crickets as you would on a couple of steaks, your six-legged fixings will last longer.

Where to get them

Online you’ll find a variety of products to satiate all your bug hankerings—from protein powder and flour, to snacks and fresh insects. You can buy them on Amazon or from specialty sites such as Entomo Farms or Exo Protein. Make sure to read the “labels” before you purchase: If you buy fresh crickets, for example, you’ll want ones that were farmed specifically for human consumption, as opposed to food for your pet iguana.

Now, you’re probably wondering why you would buy crickets if you can just pick them up from the park or any open green area near your home. Yoon explains it’s better to leave the crickets in your backyard alone—there’s no way of knowing if they’ve been exposed to pesticides or contaminants that could be harmful to you.

“Just like you don’t want to pick up roadkill and eat it, you want to get responsibly sourced food,” he says.

What to get first

When people think about eating bugs, they most immediately picture a taco with chapulines or a bowl of sautéed crickets. But the truth is, you can opt for a less shocking alternative. Products made of insect protein (powders, flours, pastes) run aplenty, and they provide a perfect first step into entomophagy, given that there are no eyes, legs, or antennae involved. You can also buy flour wholesale—cricket and mealworm are the most common—and bake it into cricket ginger cookies or chocolaty chip mealworm cookies.

If you want to go a step further, take Yoon’s advice and sprinkle roasted, ready-to-eat insects on a dish you already love. “You can fold them in, just as you’d add capers and croutons,” he says.

Yoon also recommends experimenting with different ways of cooking insects. Just as boiled chicken tastes very differently from fried chicken, you might like your bugs cooked in a certain way and not another. You can sauté them, drench them in oil, and even turn them into soup.

If you’re not sure what dishes to start with, you can always get some ideas from local restaurants that include bugs in their menu. Put in a few orders and decide what you like—it may be a snack or a dessert, or something so simple as guacamole and chopped crickets. Once you’ve settled on your favorites, look for a recipe online and try to replicate it at home.

If you don’t have a great idea of what insects taste like or what their texture is, it might be hard to think of how they’d fit best in recipes. Don’t worry—that’s what experts are for.

Culinarily speaking, crickets one of the most versatile insects you’ll find, Yoon says: They take on the flavor of whatever you cook them with. If you buy them frozen or already roasted, you can sauté them with an aromatic oil like sesame and play around with spices to give them a deeper, more interesting zest.

Ants, meanwhile, have a more defined taste profile, thanks to their evolutionary history. They use formic acid—also found in lemon—as a defense mechanism against predators, giving them a “wonderful tanginess,” Yoon says. “I find they pair extremely well with shellfish and guacamole—or anything you want to add a little kick to.”

Mealworms have an earthy flavor, similar to mushrooms or beets. Yoon says he likes to combine them with chocolate desserts, and suggests adding them to a brownie or cookie recipe.

No matter which route you choose, eating insects can make every day an adventure. You can be as safe or as experimental as you want to be, all while knowing you’re contributing to a healthier environment. Get ready to be surprised and let go of your prejudices—when we said bugs were actually delicious, we meant it.