Everything you need to know about Apple’s 2018 WWDC announcements

iOS 12, ARKit, and all the shiny new stuff from Apple. 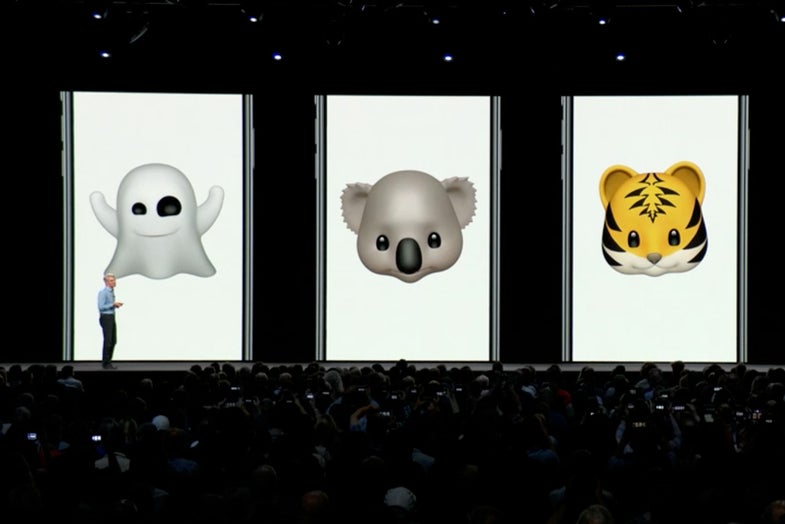 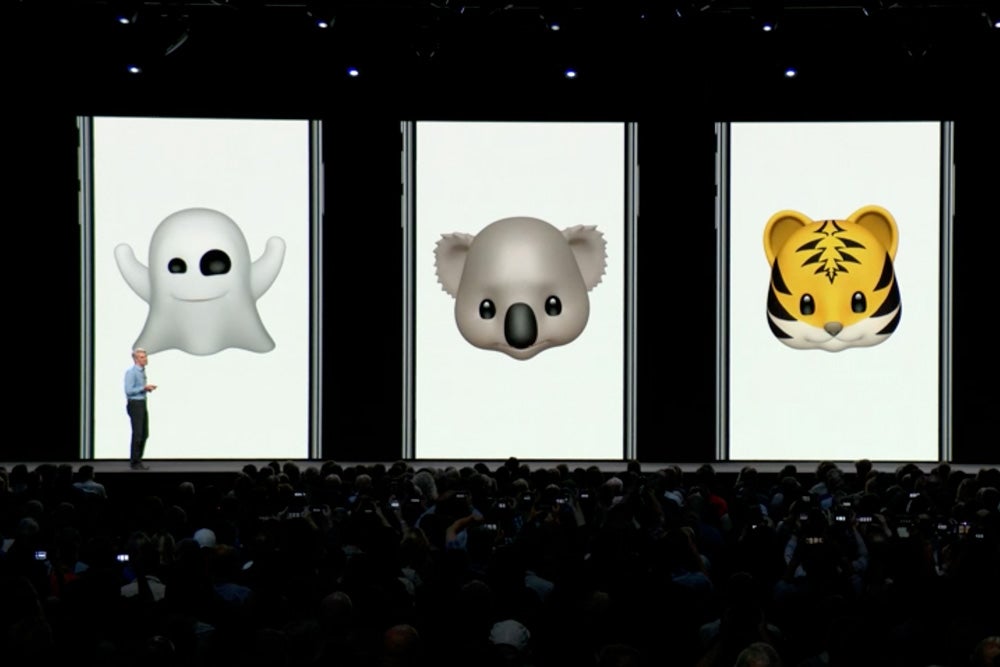 This wasn’t the most epic Apple event of all time, but look, some new Animojis!

iOS 12? Apple self-driving cars? An updated MacBook Pro? Only time will tell what Apple plans to announce at its 2018 WWDC keynote. We’ll be watching right here as Tim Cook and company take to the stage to share updates about the software that’s currently living on the iPhone, iPad, MacBooks, and every other piece of hardware to come out of Cupertino.

We’ll be watching the keynote live, (starting at 10 a.m. on the west coast, and 1 p.m. on the east coast) and updating this post with all the crucial information.

We’re also recording a special edition of the Last Week in Tech Podcast all about WWDC and the rest of this year’s big developers conferences Monday evening.

For now, catch up on last year’s announcements with our recap.

Apple loves to start off these presentations with some statistics and 2018 is no different. Here are some of the numbers Tim Cook dropped in the early moments of his keynote:

Apple says its “doubling down” on performance for the latest version of its mobile operating system. It will work on all the same devices on which iOS 11 worked. Apple says iOS 12 will make older devices considerably faster, including gadgets like the iPhone 6s. This seems like a nod to the processor slowdown issue that came to light earlier in the year. Apple wants to demonstrate that it’s not making old gadgets obsolete on purpose.

We expected to hear about AR during WWDC, but it’s interesting to see it pushed up this close to the front. Apple has a new image file format called USDZ that will let augmented reality objects translate across apps. Adobe is on-board, so you can create virtual chairs, for instance, and use them across different apps. Adobe has created what it calls “immersive design tools” that allow you to create and edit AR objects in a visual editor.

A new app called Measure lets users use their phone cameras to measure objects in the real world. It uses AR and lets you draw lines along the edges of an object and then gives you the physical dimensions. AR is doing this math anyway in order to operate, so it’s good to see a consumer-facing implementation here.

Apple’s augmented reality platform is going into its second generation, which includes a few cool updates. The most interesting is the ability for multiple users to observe and interact with the same environment from different angles. Seems like Angry Birds style games would be a natural extension of this kind of tech. 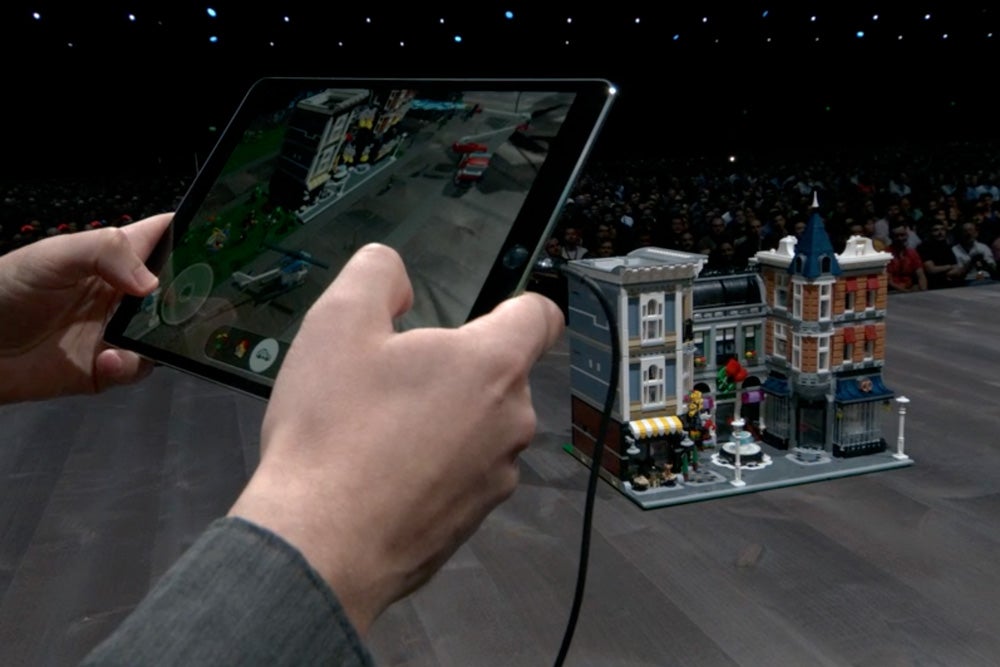 Lego’s upcoming sets will have AR experiences built in.

People take more than a trillion photos with iOS devices every year. Apple is revamping photos in iOS 12, allowing for more refined searches driven by AI. You can search by content, people, events, locations, and more. In addition to the search functions, iOS 12 also recommends people with whom you might want to share photos and videos. The sharing happens through iMessage, so Apple says it’s secure.

Apple’s smart assistant handles more than 10 billion requests per month and now Apple is allowing more customization. Shortcuts allow you to create specific commands to trigger in-app features. The example from the presentation is an “I lost my keys,” app that triggers the Tile app to help you find them. Shortcuts has its own app that lets you create groups of actions triggered by a single command. So, if you say “it’s time to go surfing,” Siri can show you the weather and put on a surfing song.

Siri is also getting more proactive in iOS 12. For instance, it will notice if you’re running late for a meeting and suggest you contact the other people on the invite. It will also remind you to buy coffee because buying things is the ultimate point of all of this anyway.

You can create shortcuts through a drag-and-drop interface that gives you options as they’re available.

Here are some native apps that are getting updates:

Stocks: A new interface gives you charts of a stock’s daily performance as well as iPad compatibility.

Apple News: The emphasis here is on story selection with a real editorial team as a response to the “fake news” phenomenon that has been bubbling since 2016.

Apple Books: iBooks is getting a redesign and a new name that’s more in line with Apple’s current conventions.

Voice Memos: iPad is getting Voice Memos for the first time and recordings will now sync across iCloud. 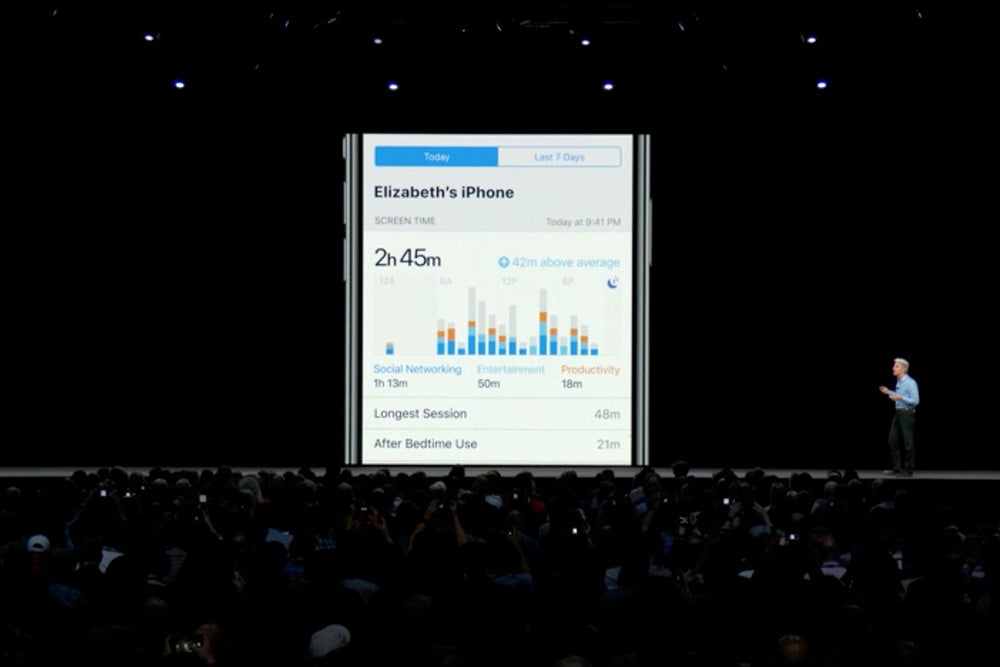 iOS 12 will tell you how much you’re using your phone.

Apple wants to take Do Not Disturb mode beyond its current usage. At night, Do Not Disturb While Sleeping will hide notifications that could distract you if you’re just trying to check the clock. You can also turn on Do Not Disturb for set amounts of time during the day in case you want to avoid distractions during specific activities.

Instant tuning on apps that allows you to send them past your home screen. Grouped notifications will let you see and address similar messages in one step. This is something that users have been asking for.

This is Apple’s answer to the Android Dashboard. This app lets you know stats like how much time you’re spending on your phone and how often you’re looking at specific apps. You can also create limits for specific app usage in case you spend too much time scrolling through Instagram or playing games. It syncs across iPhone and iPad so you can’t cheat by using different devices.

If you want to manage your kids’ usage, you can see a similar report for your offspring and check in on how they’re using their time. You can manage their usage and set allowances for certain activities. So, no more spending five hours a day watching Minecraft videos.

Apple’s super-accurate, face-tracking emojis are getting tongue-tracking capabilities, but the big story here is the addition of Memojis. They’re essentially Bitmojis that track your face.

There’s a studio built into the Animoji app that lets users pick and choose features to match their own face. It feels very familiar if you’ve ever used anything like the Xbox Live avatars or Bitmoji. The results of Memoji looks a lot more believable than Samsung’s efforts from the Galaxy S9. 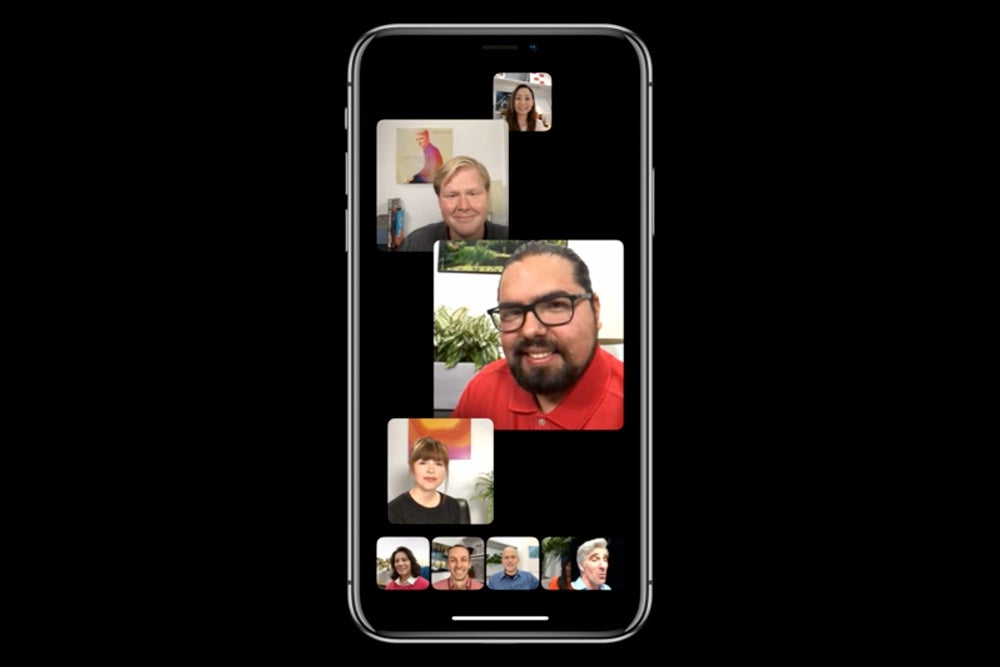 Want to talk to 30 people at once? Well, too bad, because you can now.

Earlier this year, FaceBook added group video chat to most of its properties, and now Apple is doing the same with FaceTime. Group FaceTime allows you to chat with up to 32 people at once. The interface arranges everyone’s face into tiles.

Apple has enabled all the stickers and effects, including Animoji, during video chatting. It looks a bit nightmarish.

One of the biggest functions of the Apple Watch so far is fitness. Now, Apple is adding Competitions to Watch OS, which lets you challenge friends to move more than you over the course of seven days. There are now more workout types for tracking, including yoga and hiking for more accurate stats. Runners now get information about their cadence, as well as their pace, which are features commonly found on running-specific fitness watches.

Now, if your watch senses that you started a workout, it will ask if you want it to start tracking. Once you stop moving or your heart rate decreases, it will automatically stop your workout as well.

Because texting is tough on a watch screen and phone calls are the worst, Apple added an instant audio messaging app called Walkie-Talkie. It works via Wi-Fi or cellular and works a lot like cellphones used to when people could still “chirp” each other with two-way messages like old school Nextel phones.

The Siri-themed Apple Watch face can now integrated third party apps to show you more pertinent information beyond texts and calendar reminders. You also don’t have to say “Hey Siri,” anymore. Instead, you can just lift up your wrist and start asking your question, using the gesture to activate her listening.

Previously, you could only listen to music from Apple Music from the Apple Watch, but now the Podcasts app is coming to your wrist. Unfortunately, third-party music services like Spotify didn’t make the cut. 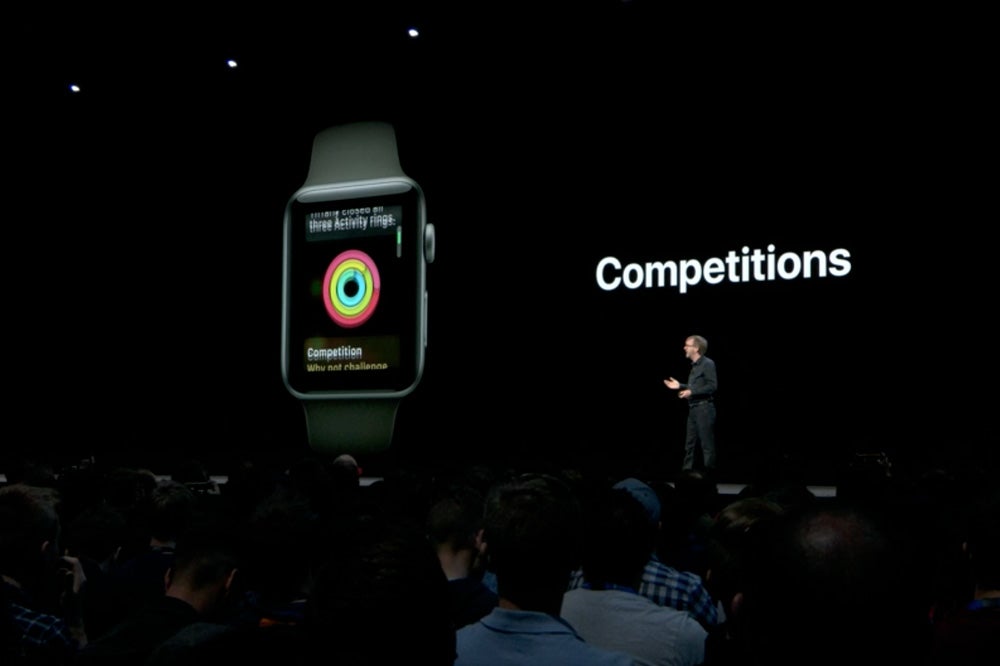 Want to challenge your friends to close their rings? Now you can.

The new Apple TV 4K first debuted last September, but now Apple is adding Dolby Atmos capabilities for surround sound. That means if you have an Atmos-enabled soundbar or speaker system, you’ll get three-dimensional sound.

The TV app now has over 100 video channels, including live news and more live sports. A picture of a typical cable DVR appeared on screen and everyone in the room giggled.

Zero Sign-On will now recognize if you’re on your cable provider’s secured network and automatically log you into the various apps for individual networks.

Roughly 96 minutes into the keynote, we’re finally getting to MacOS. The new version is called Mojave, sticking with the California naming theme.

The first talking point is what Apple calls Dark Mode. It darkens pretty much everything on the screen, from window borders to menu options. It’s….darker!

Desktop Stacks take all the files you’ve crammed onto your desktop and organizes them by type. So, it will group all of the photos, documents, and videos, with like files to clean up the mess.

Gallery view lets you get bigger previews of images and other media right through the finder without having to open Preview or another app. A sidebar in the Finder window gives you options specific to the files you select.

Quicklook goes even one step beyond Gallery view. Pressing spacebar on a photo lets you do slight edits like rotations on photos. You can also trim videos without having to open an editing app.

Screenshotting has gotten more complex. Now, you get options for editing screenshots before you save them, like zooming in on specific parts of the image. You can also record videos of what’s happening on-screen.

Continuity Camera links a computer running MacOS with a mobile device using iOS. You can use your computer to tell the camera to shoot a photo and then immediately import it. You can do the same with documents that you want to scan, which saves you a step of uploading or transferring your files.

News, Voice Memos, Stocks, and Home apps are coming to Mac for the first time, too. iOS is creeping onto laptops more than ever. This is part of a bigger Apple project, that’s going to bring iOS apps to the Mac App Store. That will start rolling out to developers in 2019.

In light of the recent Facebook data tracking scandals with Facebook and other web companies, Safari will now shut down the tracking functions of social media buttons or comment fields built into pages. Safari will also now provide less information to companies that can track you. By providing more basic information, it’s more difficult for marketers and other people who track you to build a “fingerprint” for you.

The Mac version of the App Store has gotten a redesign that feels more like the mobile experience. There are editorial suggestions about apps to try, and many apps have preview videos built into their landing pages.

Microsoft Office 365 and Adobe Lightroom CC are both coming to the Mac App Store later this year.