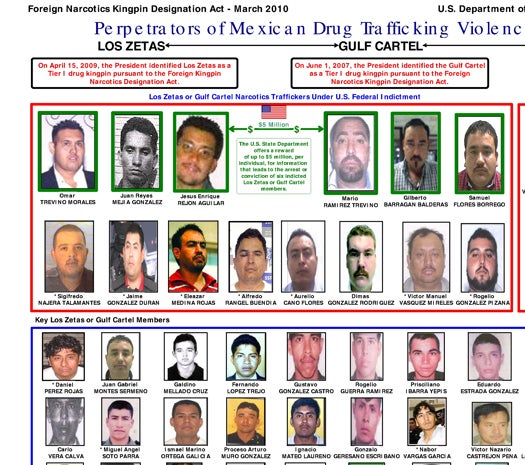 Previously, Zetas recruited largely based on skill, with ex-police and ex-military folk targeted. Now? Turns out that American citizenship has its share of perks, especially for a foreign group trying to operate in the United States, and that counts as skill enough.

According to the FBI report released to Public Intelligence, Zetas hopes that American members will help improve the cartel’s access to arms, as Americans have an easier time getting weapons, like AK-47s, and passing them South.

It is unclear how much less safe this makes Americans, if it makes them less safe at all. Zetas is involved in some intense violence, but it’s clear that the cartel has suffered attrition. By moving away from its ex-police and ex-military recruiting standard, Zetas is diluting its security mindset. American citizens may provide some new access to the country, but they are also vulnerable targets. Sitting across the border, these new recruits might be the easiest mark for either law enforcement or a rival cartel.

Bringing in new recruits unfamiliar with the organization and the way cartels work also weakens the command and control abilities of cartel leaders. There is a hint of desperation in this move, because of all the new weaknesses it introduces into what had been a formidable organization. There’s a chance this will revitalize the cartel, and provide more avenues for laundering money and buying arms, but to me it reads as almost a desperate play by a wounded creature.