Its speed is measured in frames per picosecond 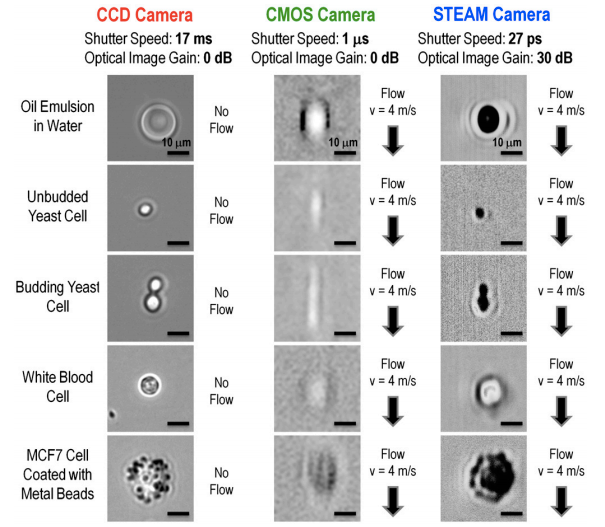 This image compares results from the new STEAM camera with a conventional CCD camera and a state-of-the-art CMOS camera. UCLA/PNAS
SHARE

The fastest camera ever made can automatically count individual cells, processing millions of images continuously and doing it 100 times faster than existing light microscopes. This super-fast imaging system could potentially detect cancer cells lurking in millions of healthy cells, and could lead to speedier diagnosis of disease.

Engineers at UCLA mashed up several technologies to build this new camera, which uses a method known as STEAM: serial time-encoded amplified microscopy. It can take 36.7 million frames per second with a shutter speed of 27 picoseconds. It’s sensitive to one part per million in real time, capturing cells moving at 9 mph. It can process 100,000 cells per second.

Current cell monitoring methods use something called flow cytometry, which passes cells through a laser processing system to study their properties. It’s pretty fast, studying thousands of individual cells a second, but it doesn’t provide an image of the particles. Instead, their voltages and other properties are analyzed. This new system can be used to pick out individual anomalies, allowing doctors or software to detect rare cell types or possible metastatic cancer cells. In lab tests, the system detected budding yeast and rare breast cancer cells in blood with a record-low false positive rate of one in a million.

It works by firing ultrafast laser pulses at cells that are moving through a microfluidic system. UCLA researchers developed this STEAM method back in 2009, when they made what was then the fastest camera ever. The resulting images are then amplified and processed with programmable circuit board arrays.

The system is only limited by the particles’ speed — they can only move so fast through the microfluidic device without causing a pressure buildup. If the cells could be induced to move faster, the researchers believe they could capture 200,000 cells per second.

A paper describing the system appears in the Proceedings of the National Academy of Sciences.