Inside the Factory: How a Chef’s Knife Is Made

PopSci goes to Germany to witness the cutting edge of manufacturing 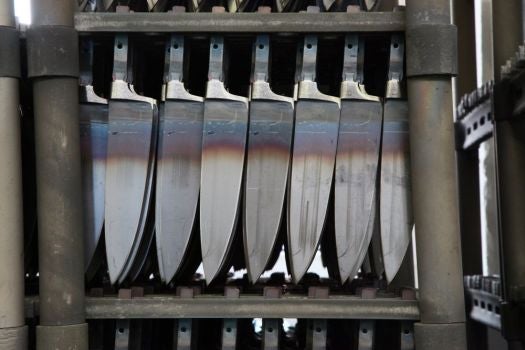 Last week, I visited Solingen, Germany’s “city of blades,” where knives, swords, and the like have been made for centuries. In between sipping beers and munching wursts, I paid a visit to the factory of Zwilling J.A. Henckels, at their kind invitation, to peer at the semi-roboticized lines where they produce their knives.

The raw material comes into the factory on huge spools of sheet steel, each sheet the thickness of a knife. The steel is cut into individual blanks, destined to become individual knives. About three weeks elapse between when a blank comes off the spool and when it emerges, a finished knife, at the other end.

In my breathless tour of the factory, I watched as a giant press cut and stacked the blanks, which are made of the company’s secret blend of stainless “special formula steel.” The blank is transported to another building, where the first of the factory’s 90-odd industrial robot arms takes it in hand.

In the classic design, the knife has a thickening where the blade meets the handle (aka the bolster). This is formed first, by heating the middle of the blank, and then pressing the metal’s two ends together so the molten middle bulges and widens, in a process that my contact specifies is called upset forging. Next, a drop forge shapes the bolster, before the blank is quickly cropped into the rough shape of the knife it’s going to be.

After that, it proceeds through a series of cooling, supercooling, and heat-tempering steps that give it its corrosion resistance and toughness. This is one of the benefits of the special steel, I’m told — it heats and cools in very predictable ways, allowing the factory to use more precise temperatures rather than temperature ranges.

After the tempering, any distortions or warpings that the heat has created in the blade are hammered out by a highly skilled human, who picks up and eyes each knife, one at a time, and flattens any that need flattening with precise strokes of a little hammer.

The knife passes into the hands of another series of robots, which use grinding wheels to narrow down the thickish blank into the tapered contour of a blade. Only roughly, though — the fine grinding and sharpening, as well as putting on the handles, is left to the factory’s humans, who wear puffy gray overalls and exude the confidence that comes with being extremely good at your job, and quite possibly coming from a line of knifemakers generations old. Wooden handles are glued onto the tang of the knife and then riveted in place; plastic handles are simply melted on by heating the tang and inserting it in a ready handle. The edges of the handles are smoothed by robots.

Finally the knife is cleaned and passes onward to the scrutiny of the quality assurance women. If it has no flaws — there’s a big photo-book of possible flaws — it gets packed up and winds up in someone’s kitchen.

Check out the step-by-step gallery of pictures from the knifemaking process. 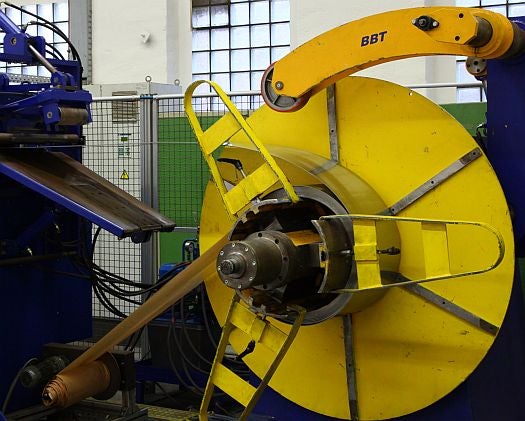 Steel comes into the factory on giant spools, from which it is drawn and chopped into knife-sized blanks. 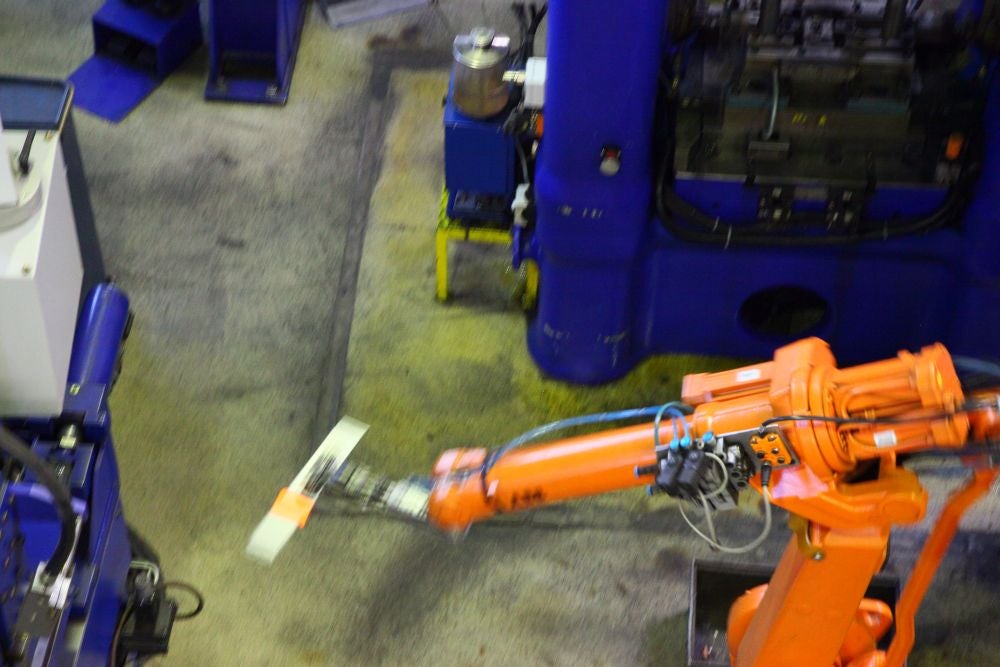 Gallery: Inside a Knife Factory 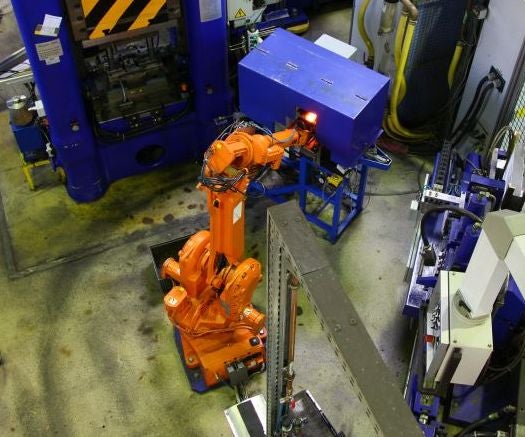 …and takes it to be spot-heated. The molten, swollen middle of the blank is then drop-forged to become the bolster of the knife. 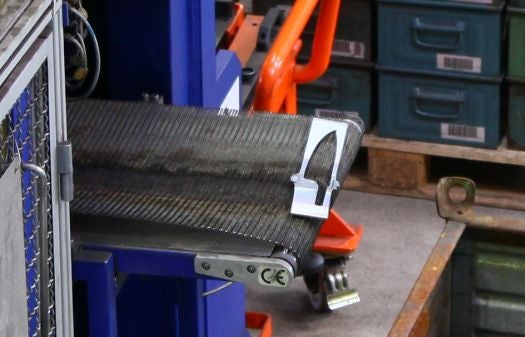 The excess metal drops off the conveyor belt to be recycled. 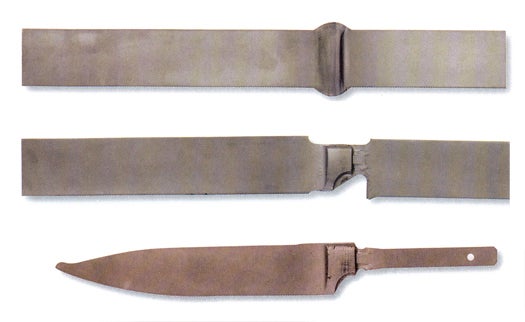 First, upset forging creates the bulge. Second, drop forging makes the bulge into a bolster. Third, the part of the blank that is not going to be this knife is removed. 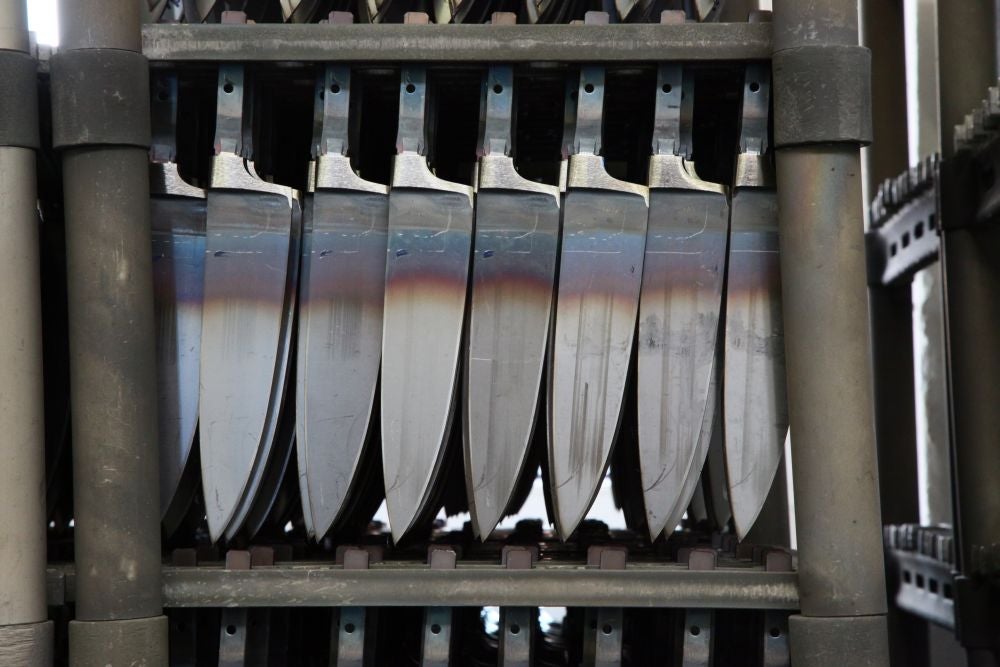 A rack of knives that have been forged and cut, but still not ground. 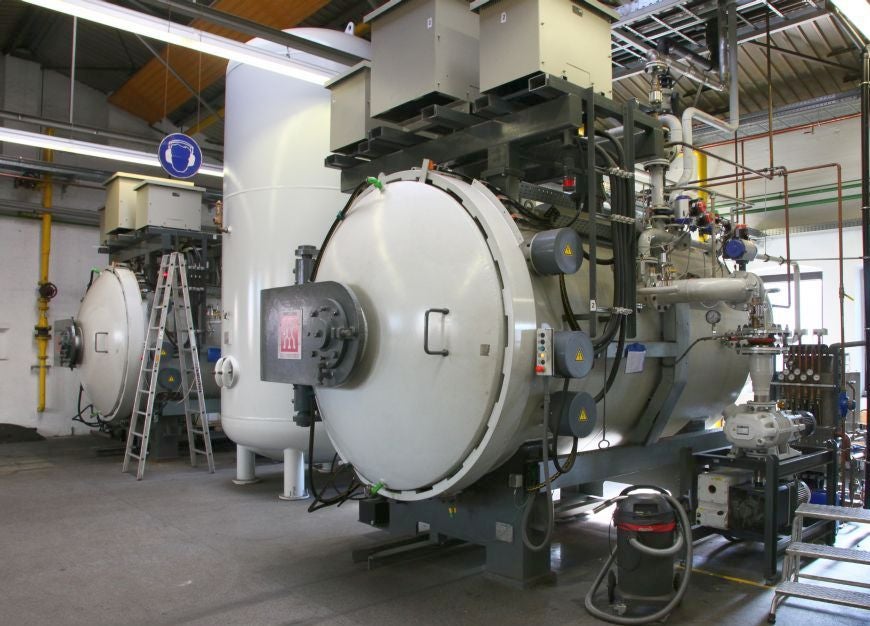 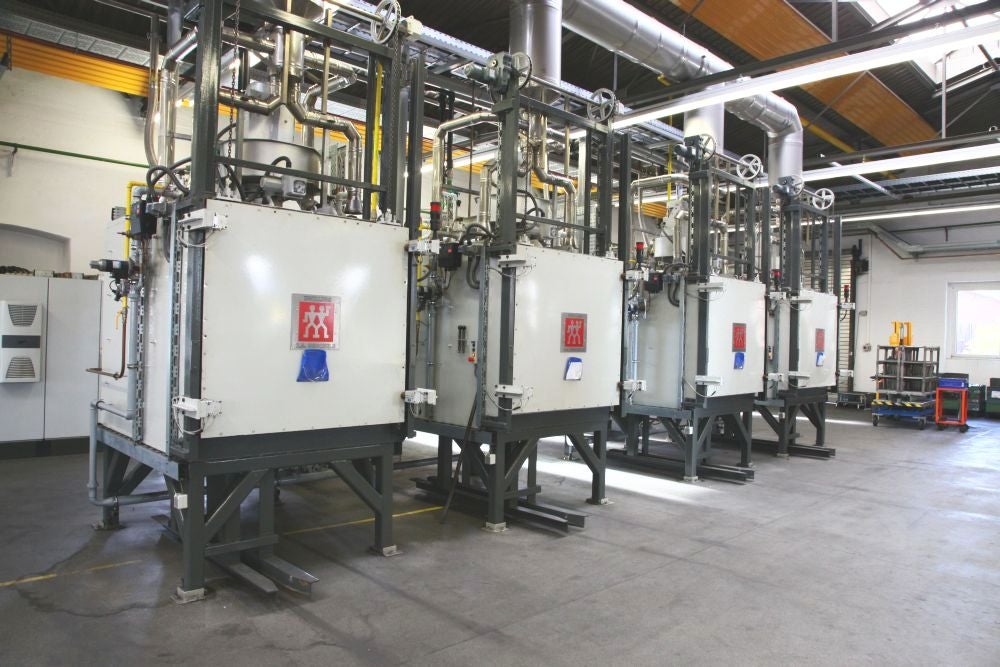 In these ovens, the steel is chilled to minus 94 degrees to give it its corrosion resistance, then tempered for toughness by holding at a temperature over 400 degrees. 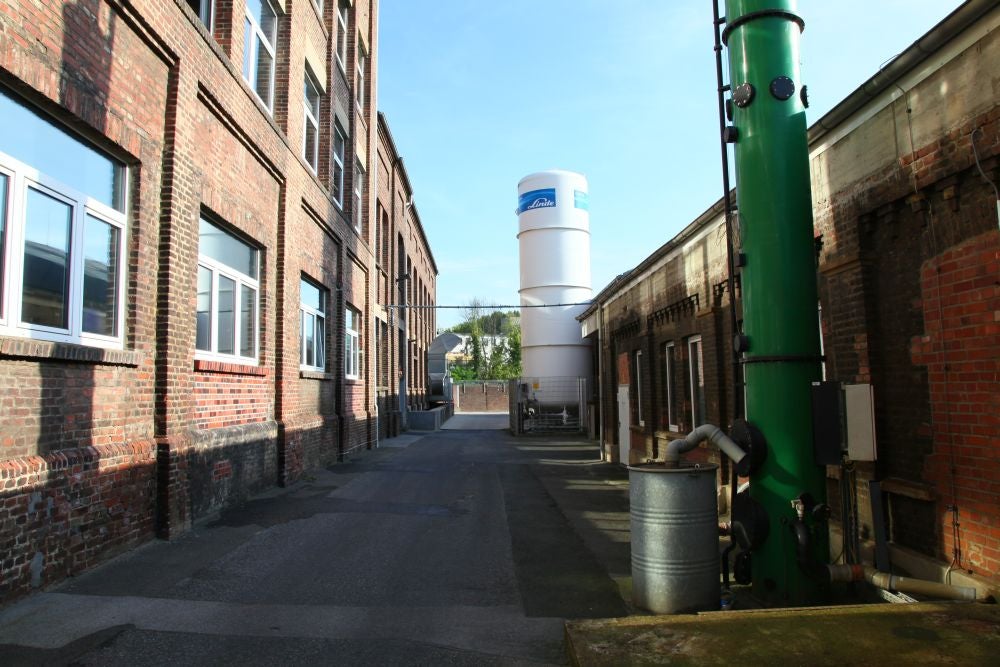 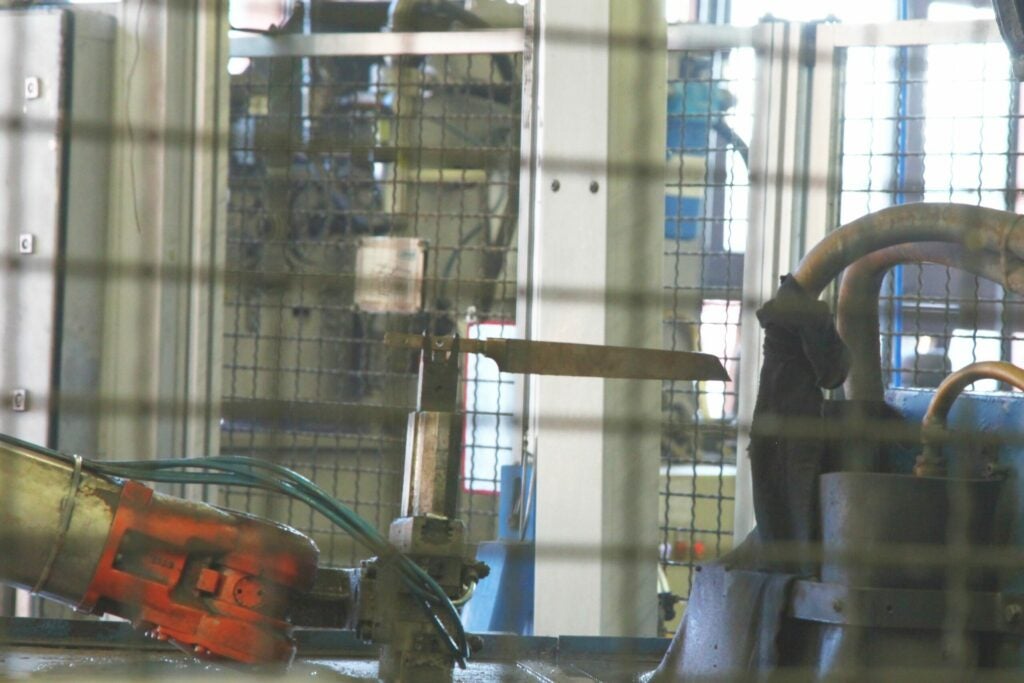 In the next building, another highly skilled industrial robot gives each knife its taper by holding it against a series of water-cooled, sludgey grinding wheels. 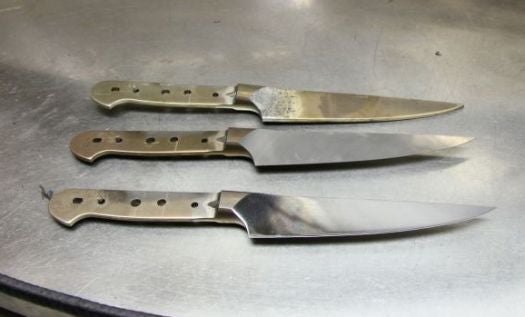 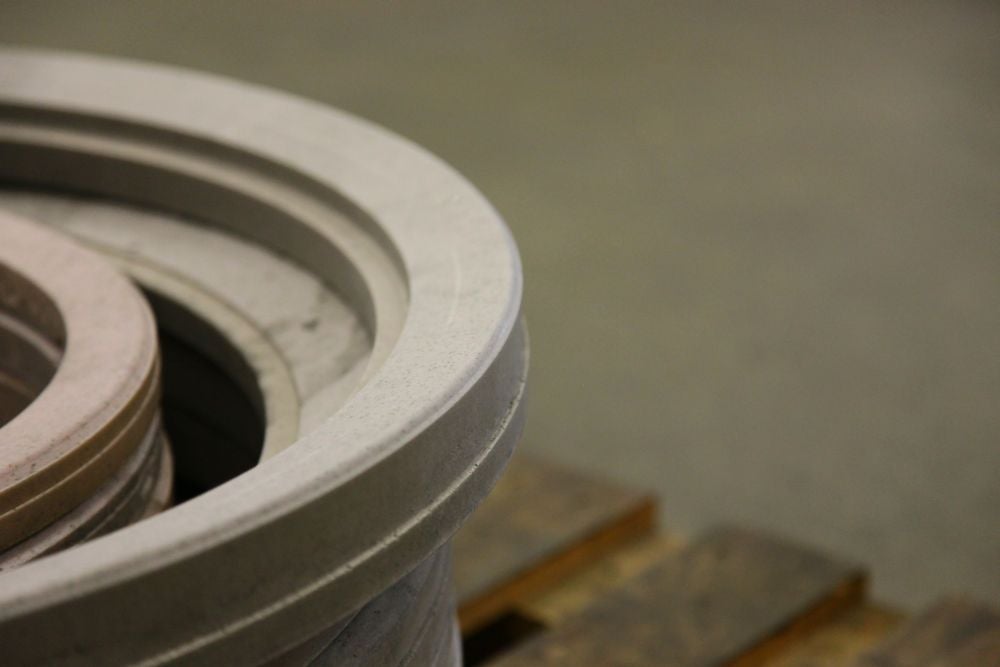 The contour of the edge determines the final shape of the knife’s bolster. 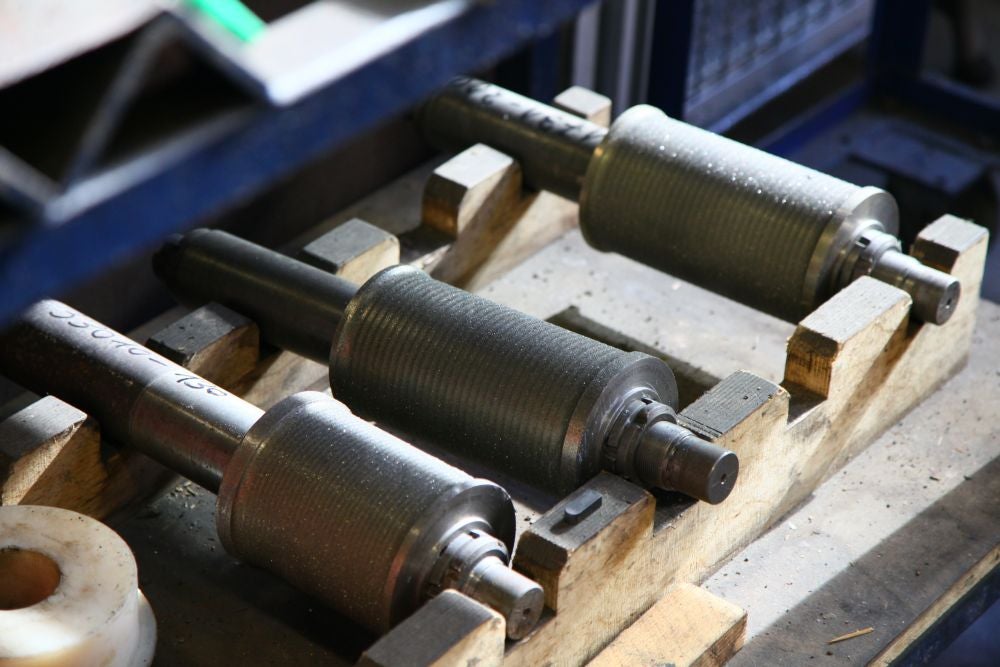 For making serrated knives! Actually, these are the wheels used to re-groove the serrated grinding wheels. 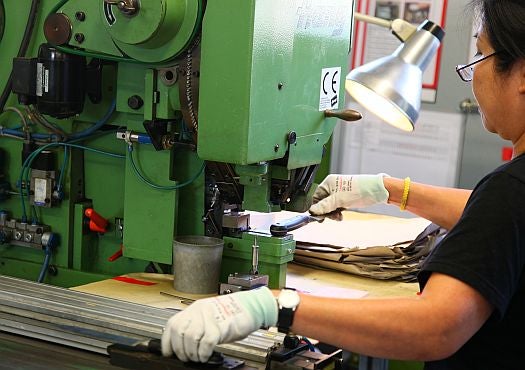 The Knife Get Its Handle

Handles are riveted in place. Apparently women are 60 percent more productive at this kind of labor than men. 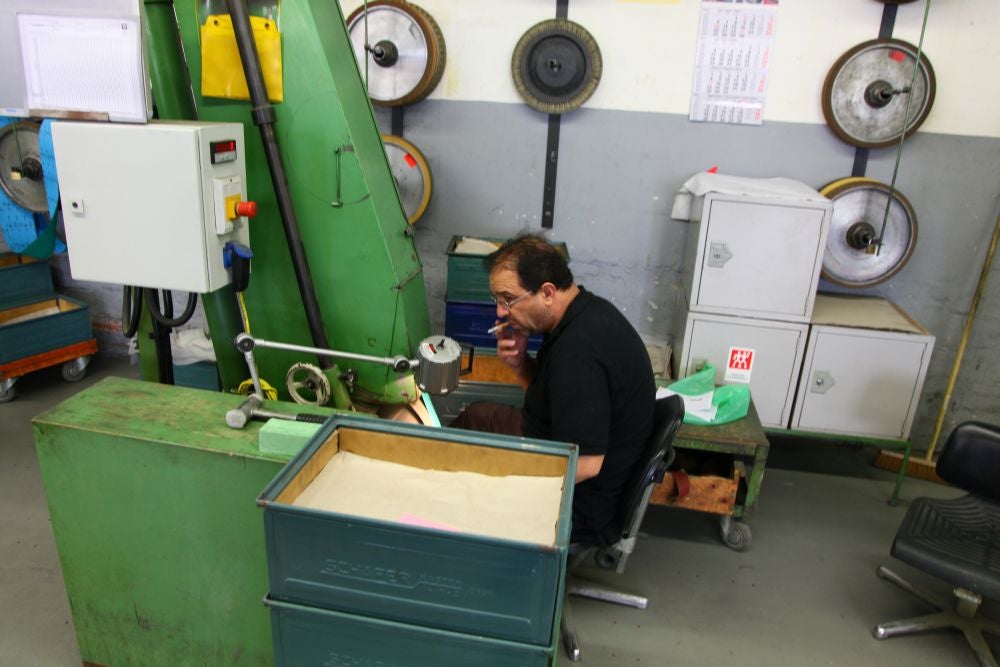 Sharpening Is Done by Humans

This human is not on a smoke break — he’s sharpening as he puffs. 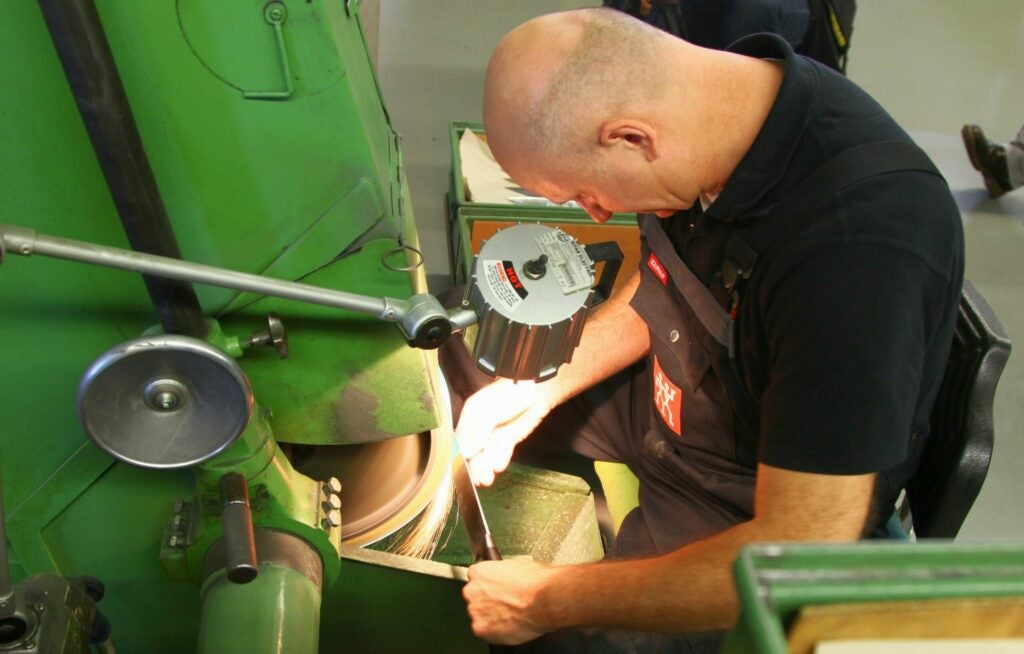 It takes about 9 months of intensive training before a sharpener can start work on the production line. 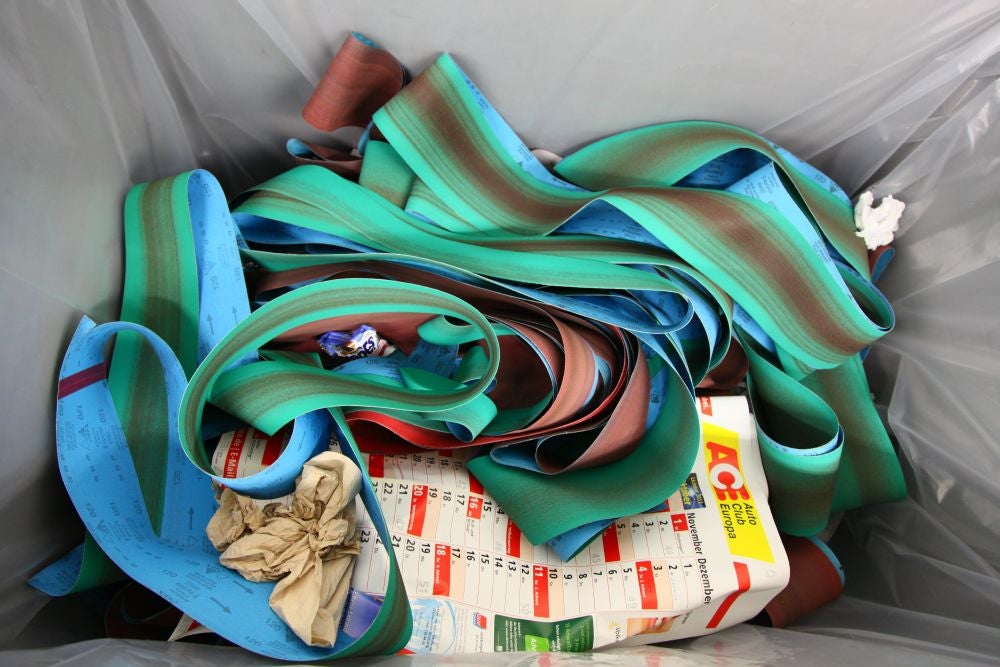 This photo is my new desktop wallpaper. 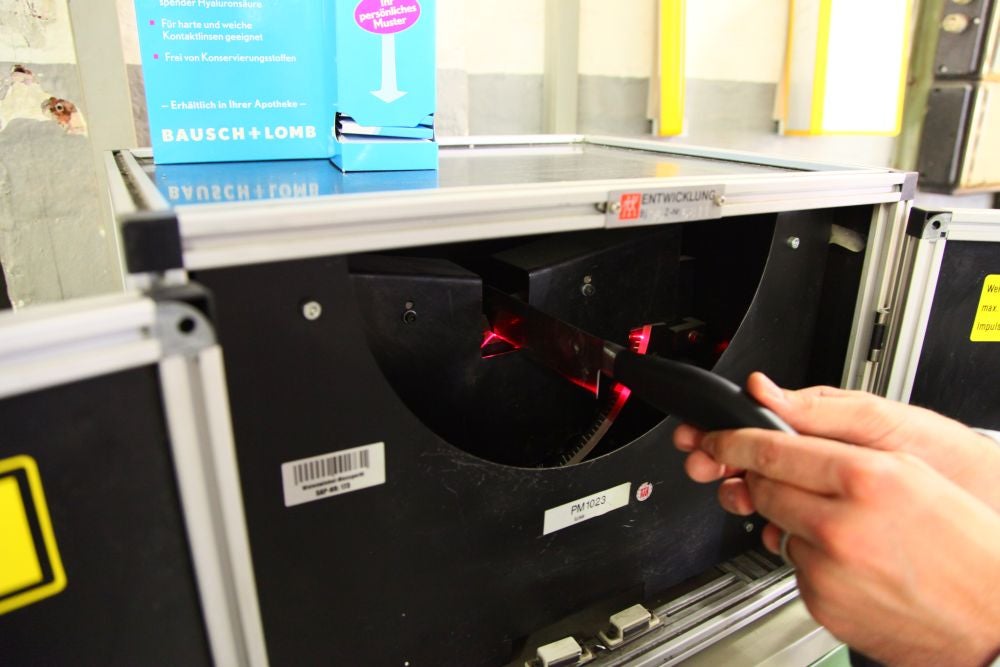 A laser edge-meter checks the angle of the blades’ bevel, to ensure exact sharpening. 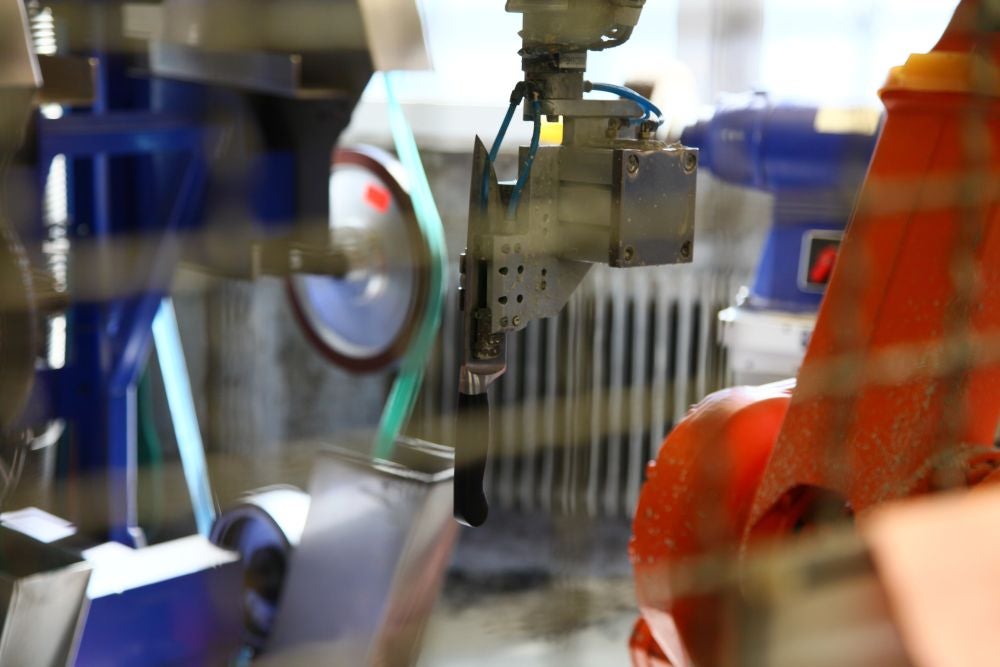 With the handle on, a robot gives the knife a final rubdown. 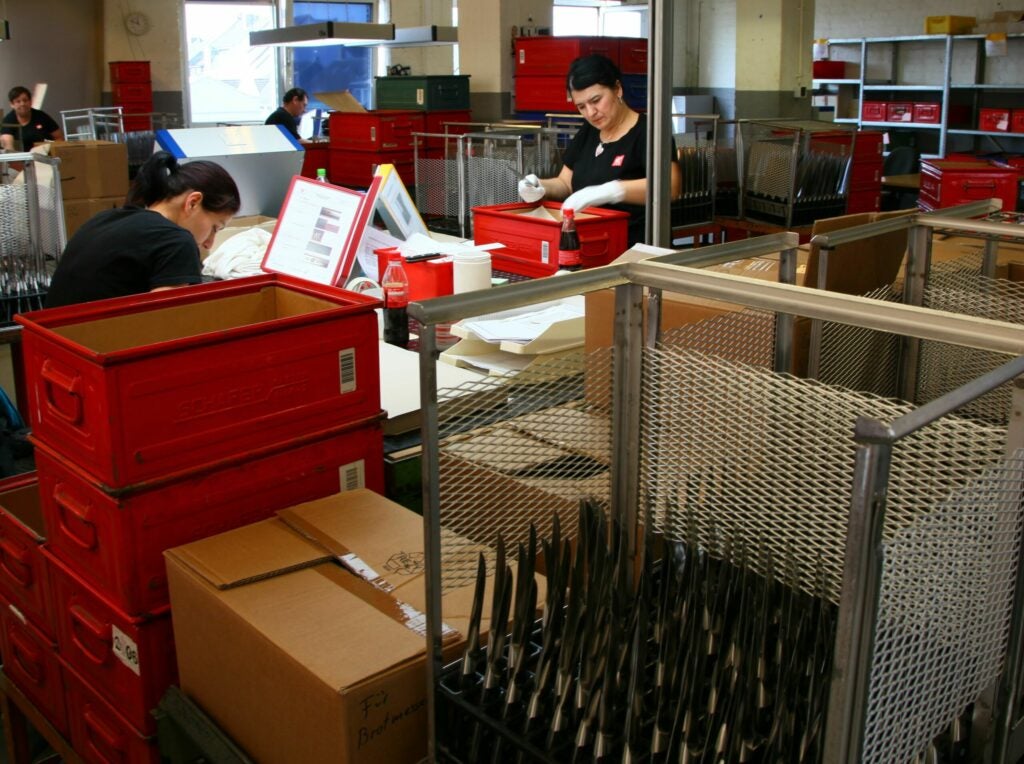 Finally, a team inspects each knife for any flaws. 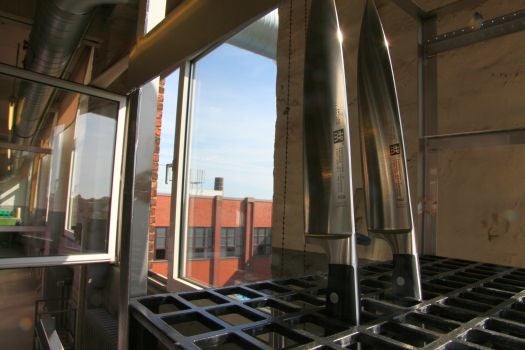