3 Ways To Make A Star On Earth

Fusion: It's a blast! 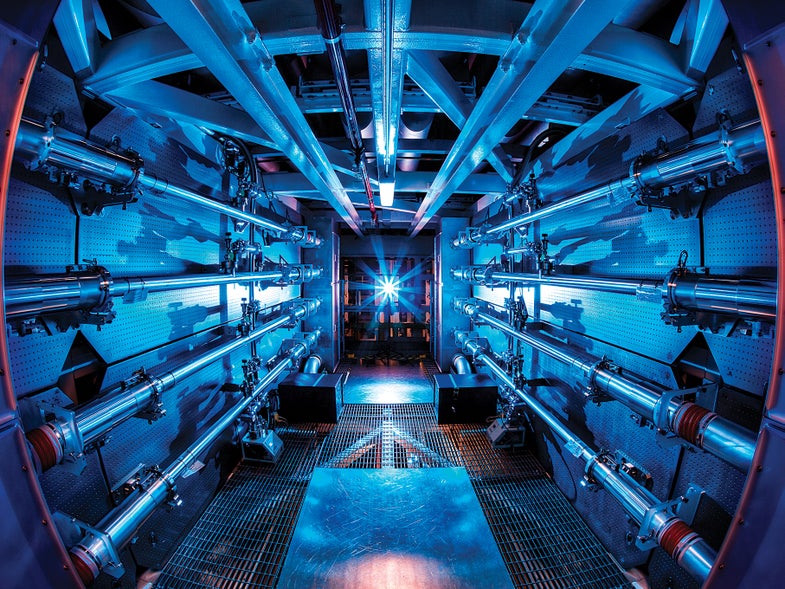 Last fall, Lockheed Martin divulged a new fusion reactor design–one it claimed could power homes and cars in a decade. The wildly optimistic claim is reminiscent of that old trope: Fusion is just 10 years away … and always will be. Still, experiments suggest we’re getting closer.

Fusion is simple, in theory. You extract hydrogen isotopes from water and lithium and heat the fuel to millions of degrees (Celsius or Fahrenheit is irrelevant), creating the elusive fourth state of matter: plasma. The nuclei then move faster and faster until they collide and fuse, forming helium and releasing energy. Et voilà! Limitless clean power.

In practice, it’s not so easy. Unless the plasma is constantly squeezed and heated, forcing the nuclei together, the reaction diffuses into nothingness–it’s very difficult to contain something akin to the center of a star. Nonetheless, today more than a dozen teams are racing to create a sustainable fusion reaction. These three strategies lead the charge.

This year, construction will begin on the 35-nation megaproject ITER, located in France. A doughnut-shaped, power-plant-size reactor, ITER will contain a fusion reaction within a magnetic field and siphon off energy through its metal walls. Scientists hope to have a test-scale reaction running within the next decade.

2. A Reflective Wall In A Compact Reactor

In Lockheed’s design, a row of magnetic coils create a reflective wall to contain the plasma. The company’s small-scale reactor allows scientists to tweak experimental setups more nimbly than they can with a reactor the size of ITER. Lockheed says it has already fired up its reactor 200 times but won’t release any data–so whether those attempts were successful remains to be seen. If they were, well, we may all be driving literal Ford Fusions before long.

3. A Micro-Explosion Ignited By Lasers

At the National Ignition Facility, scientists approach fusion differently. They fire dozens of lasers at a BB-size bead of solid deuterium and tritium. In a billionth of a second, the hydrogen-based fuel collapses into a dense plasma and bursts into a puff of energy. Last year, scientists produced the first-ever net positive fusion reaction, meaning they got slightly more energy out of the plasma than they put in.

Dead Ends In The Search For Limitless Energy

This article was originally published in the April 2015 issue of Popular Science, under the title “Three Ways to Make a Star on Earth.”