Kublai Khan And The Mongols Were Terrible Polluters

Their ancient silver mines are still poisoning farmland in China 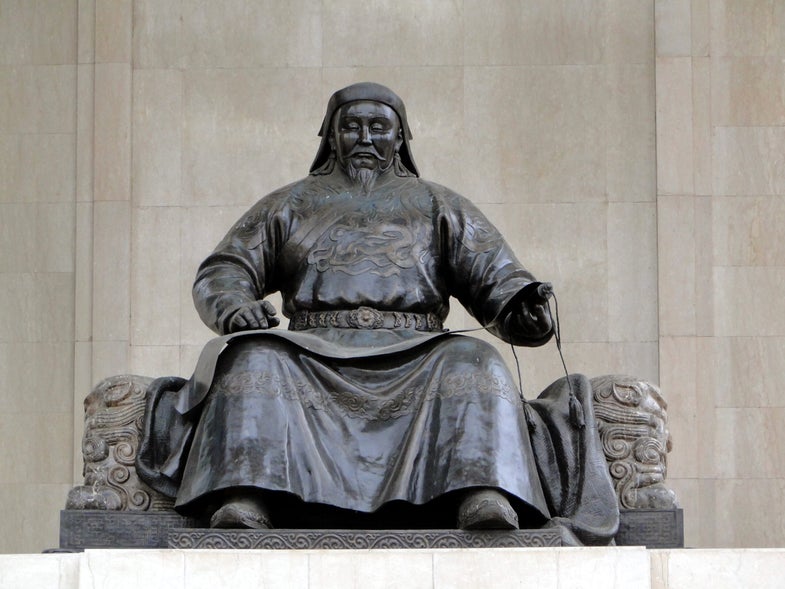 Though the heyday of the Mongol empire was well over 700 years ago, the legend of the mighty Khans persists to this day, recorded in popular culture and, maybe, pollutants.

A new study published in Environmental Science and Technology found that in addition to the cultural legacy, the Mongol empire left a pretty terrible environmental blight on the landscape. In one area of China noted for its silver deposits, researchers found extraordinarily high levels of pollutants associated with silver production near Lake Er. The sediment layers corresponded with the years 1271 to 1368 AD–when the Mongolian Yuan dynasty was active in the area.

It turns out that while the Mongols were busy conquering most of Asia, they were also making good use of the natural resources in the area, including metal, which isn’t the most environmentally friendly thing to take out of the ground. Silver doesn’t just show up in hunks of metal that can be chopped out of the ground with a pickaxe. It typically shows up mixed in with a lot of other metals including dangerous ones like lead, which have to be removed through a refining process. And the refining process, contrary to its name, is very dirty work, involving lots of burning, melting, and separating, during which large amounts of lead and other contaminants can get released into the environment.

The researchers found that the levels of lead, cadmium, zinc, and silver released into the environment were extraordinarily high during the Mongols’ reign. They estimate that the pollution produced using the Mongolian method of silver processing is between three and four times worse than modern techniques.

“Many studies have documented lead and metal pollution from early metalworking, but this study is the first to show that pollution was greater in the past than today. It shows that people may have been seriously impacting the environment for much longer than we thought,” the researchers write in the paper.

The impacts are severe. Heavy metal contamination is an issue that farmers across China are facing today, with some studies estimating that nearly one-fifth of China’s arable land is contaminated. Much of that is due to more modern industrial pollution, but part of the blame rests with Kublai, Ghengis, and the other Khans.