But what does it mean for data privacy and marginalized people? 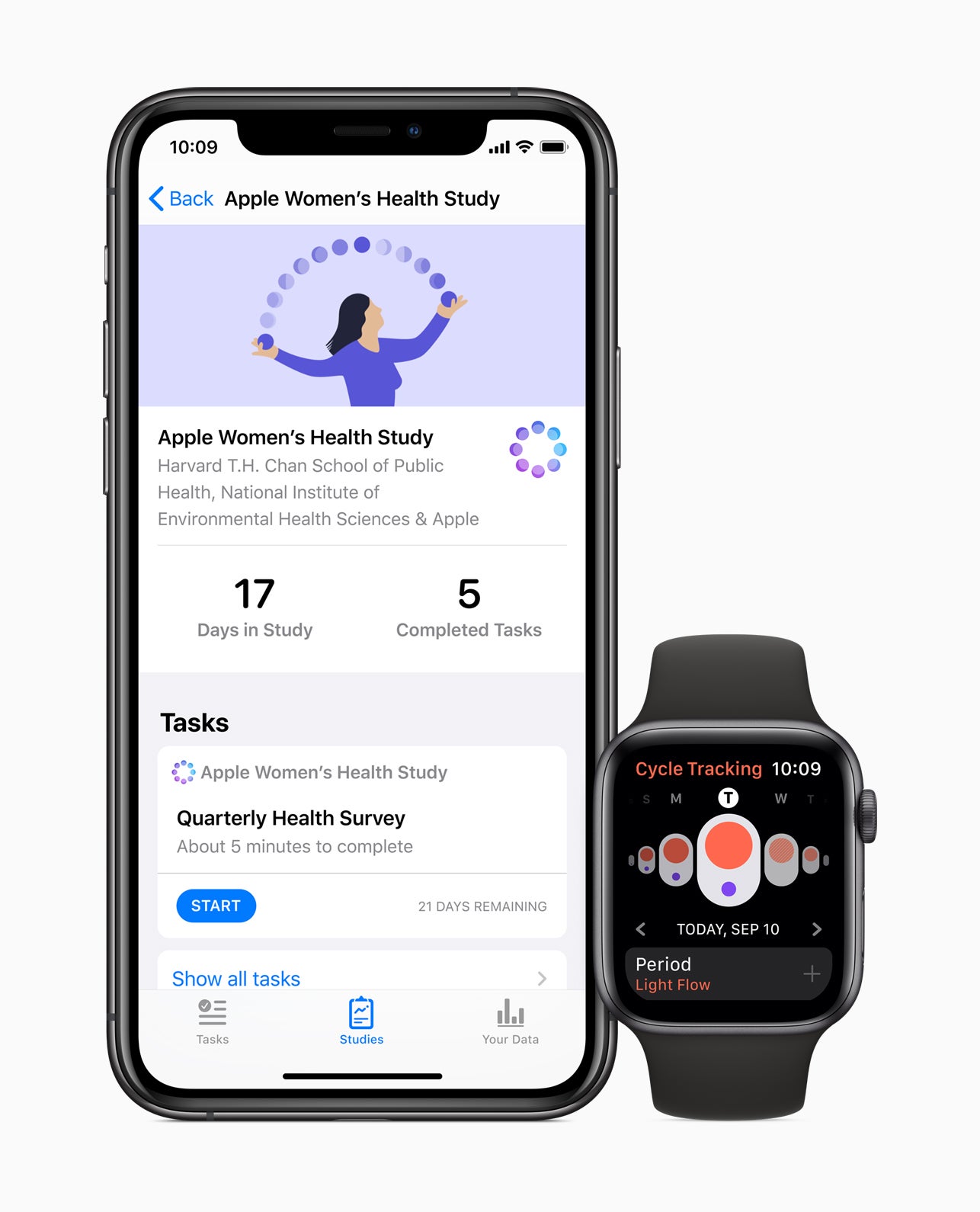 The Apple Women’s Health Study aims to advance the understanding of menstrual cycles and their relationship to various health conditions with scale and scope that has never before been reached. Apple
SHARE

On Thursday the Harvard T.H. Chan School of Public Health announced a new period study that could reach an unprecedented number of subjects. While the scientists and physicians behind the study are no strangers to clinical research, Harvard and the National Institute of Environmental Health Sciences are teaming up with a newer face on the medical scene: Apple.

The Women’s Health Study is one of three initiatives now open to all Apple customers in the US (the other two are focused on heart health as it relates to physical activity and hearing loss from environmental noise and headphone use). But while all of the studies aim to add a massive influx of data around poorly understood topics, Harvard’s analysis of hundreds of thousands of users’ periods could be a game changer for physicians.

“There’s just a huge lack of information,” says Shruthi Mahalingaiah, an assistant professor of environmental reproductive and women’s health at Harvard. Mahalingaiah, who helped design the new Apple study, previously worked on digital-survey interfaces intended to make it easier for women to engage in long-term research. Her new project will use iPhone and Apple Watch devices to collect specific data like cycle schedules, and use monthly surveys to understand each participant’s experience. Mahalingaiah and her colleagues hope to get a closer look at under-researched conditions like polycystic ovary syndrome and period-related pelvic pain, while painting a more detailed picture of how menstrual cycles relate to fertility and how menopause plays out for different individuals.

The three studies—paid for by Apple and powered by its new Research app, which users can now download for free—aim to collectively enroll millions of participants and follow them for a decade. Subjects will simply click through privacy and permissions info to enroll, then passively contribute data to the research studies they’ve opted into through the use of an iPhone and, in some cases, an Apple Watch. The idea is that sharing medical data will be so easy, users will be happy to participate—which is Apple’s biggest selling point and its most serious hazard. In the case of the women’s health study, all participating users will share data via the company’s period-tracker function and surveys. They can also choose to share other health metrics like physical activity and sleep quality to help the study authors pinpoint previously unknown connections between menstruation and wellness.

Mahalingaiah is particularly excited to gain insight on sub-clinical conditions—women’s health issues that don’t quite fit into a tidy diagnosis, or aren’t severe enough to receive one—so physicians can offer relief.

“I suspect the prevalence of these sub-clinical but impactful issues are higher than we know,” she says, adding that aspects of menstrual health that have more to do with wellness than disease—like how athletic performance or mood changes throughout a cycle—will be easier to spot with more data. “It’s about filling in the gaps of our basic understanding of physiology.”

Michelle A. Williams, the dean of Harvard’s T.H. Chan School of Public Health, echoed those sentiments, pointing out just how little medical pros know about the basics of the menstrual cycle. “Past large-scale studies of women’s health, such as the Nurses’ Health Study, relied on a smaller cohort that did not accurately represent the overall U.S. female population,” Williams told Popular Science in an email. That research began in 1976; other seminal projects on women’s health are even more outdated. “Those studies were working with women who were not dealing with the same health issues as women are in this day and age,” Williams explained. “Today, our environment is different. Our body mass index is different. The age at which menarche begins is different. This [Apple] study will capture the full breadth of experiences of women occupying the world today.”

Of course, while there are obvious upsides to offering the 100 million or more iPhone users in the US easy access to a study without having to interact directly with a hospital or university, bringing Apple into the mix won’t suddenly give every menstruating person in the country a voice or diagnosis.

“I do think there’s going to be a massive transformation in healthcare,” Mahalingaiah says, citing an increased focus on wellness and prevention, a desire from patients to own and understand their own anatomical data, and the digitization of medical records. “There will be a huge impetus to monitor your own activity as it might relate to health, your sleep, and physical activity, and use it for health interventions,” she says. “But the challenge with that is making sure the transformation is equitable and reaches everyone, including under-served populations, who can really benefit the most.”

Mahalingaiah hopes the Apple study will evolve to be more inclusive and accessible with user feedback and further research, but admits that electronic health surveys have some of the same limits as old-fashioned data collection when it comes to marginalized patients.

“In my own practice I worked with a nearby women’s shelter where many people had irregular periods, but they weren’t worried about that—they were worried about how to avoid frostbite,” she says. “At a certain level, no matter how we design a study, if someone doesn’t have shelter or reliable access to food, we have to be realistic about reaching them.”

“Any study that is conducted via an expensive consumer product like an Apple Watch is going to have a participant population that is not very representative of the broader population,” Danielle M. Wenner, a bioethicist at Carnegie Mellon University, told Popular Science in an email. “It will wildly over sample the privileged. And because we know that both background conditions that contribute to health outcomes, as well as health-related behaviors, are in many ways correlated with socioeconomic status, this approach looks ripe to generate more biomedical progress that is relevant or helpful to the well-off, while leaving those less well-off behind.”

Handing out Apple Watches to the disenfranchised won’t solve that problem, either. “Apple needs to be boots on the ground in these communities, just like successful public health researchers have been for decades,” says Lori Hoepner, Assistant Professor of Environmental and Occupational Health Sciences at SUNY Downstate Health Sciences University. But wearable devices already play a big role in tracking medical problems tied to environmental pollution, Hoepner says; she sees big data as a key component in developing novel ways of preventing and curing disease. All told, Apple’s undertaking could represent a major step forward.

Still, Hoepner and other experts are skeptical of Apple as an arbiter of medical-data collection.

“I’m glad Apple has said ‘we won’t sell your data,’ but I want to know what means,” Nicholas G. Evans, an assistant professor of philosophy at the University of Massachusetts Lowell, who focuses on the ethics of national security and emerging technologies, told Popular Science in an email. “Will they make it otherwise available? Given that Apple is now involved in the credit card game, are these data going to influence credit ratings even if they aren’t being sold? The data pipeline here is really opaque. As we’ve found out with companies like Google and Facebook, the danger isn’t necessarily today or tomorrow, but one day, and for the rest of our lives. And, in the case of medical data, potentially our ancestors’ lives.”

I. Glenn Cohen, who specializes in bioethics at Harvard Law, said the opportunity to get more people involved in research is terrific. “Apple deserves kudos for the initiative,” he told Popular Science in an email. But he did express concerns about informed consent—the process by which study subjects are made to understand what data they’re handing over and what’s going to be done with it. “It’s a mantra that informed consent is a process, not a piece of paper,” he wrote. “It should be interactive, with the ability to answer questions by participants … And what we know about click-through agreements suggests most people are unlikely to really spend time engaging.”

One thing is clear: This will not be the last foray into serious health research from Apple—or from the tech world in general.

“To my mind, this study actually represents the future of public health: a three-way partnership between academia, industry, and government,” Williams, the Harvard dean, wrote. “Health is our most important asset, and in public health we work to preserve that. But you cannot have better health without better funding, and you cannot have better health without better policy. This partnership allows us to study women’s health at a unique scope and scale, and then translate those findings to a large audience in ways that will hopefully make a real and lasting impact.”

With researchers ready to reap the public health rewards of a society full of wearables and smartphones, regulators will have to play catch-up to determine what is safe, ethical, and fair. Users will have to decide for themselves whether the potential insights to be gained are worth the risks.