Excerpt: Plight of the Living Dead 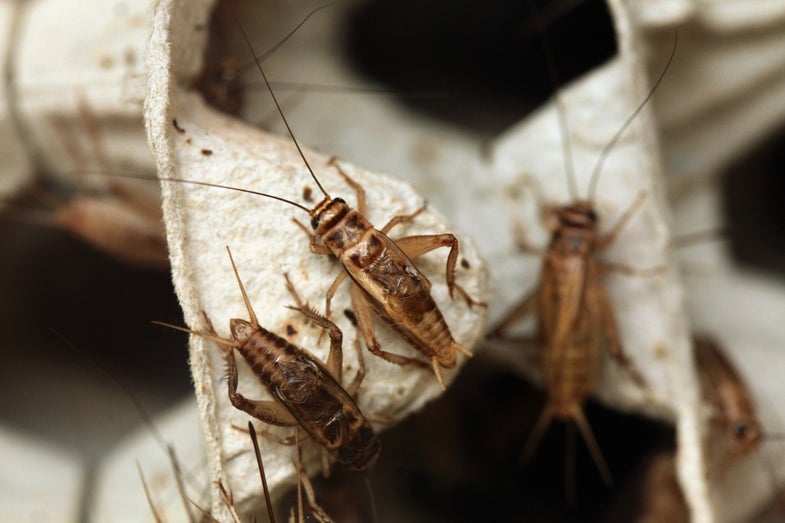 In a muggy room at the University of New Mexico, packed with racks of plastic tanks, themselves packed with snails, biologist Ben Hanelt and undergrad Rachel Swanteson-Franz cultivate nematomorph zombie worms. On account of some of the snails having tropical tendencies, the temperature is set to precisely 82 degrees Fahrenheit (according to a comically large Flavor Flav-style thermometer hung from one of the racks). It smells like you’d expect over 100 tanks of snails to smell at precisely 82 degrees.

Swanteson-Franz fills a Pyrex bowl with a finger or two of water, pulls a cricket from a bin, and drops it in. As soon as its host hits the water, the nematomorph makes its move, squirming sinuously out of a hole it’s drilled in the cricket’s belly. This appears to be not such a big deal for the cricket. The worm wriggles back and forth, growing longer and longer, but only once in the 50 seconds it takes the worm to emerge does the insect so much as twitch its legs. The rest of the ordeal it just floats there, as if a worm seven times its length isn’t spilling out of its belly and swimming free. Even when the worm is at last liberated, the cricket simply floats—even as the whips of the nematomorph’s long, thin body occasionally smack it around the bowl.

Swanteson-Franz isn’t done. She drops another cricket in another Pyrex of water and sets the bowl next to the first. This cricket has more moxie. It struggles to swim away from the alien emerging from its gut, bouncing off the wall. But before the second subject even finishes with its ordeal, Swanteson-Franz adds another Pyrex-cum-cricket to the mix.

This new subject, too, tries to flee the parasite it now finds itself birthing, as its compatriot in the bowl next door continues its own quest for relief. At last the second cricket’s worm frees itself, followed not long after by the third. Everyone now rests. And while the crickets will never know it, in this lab they got off easy, for in nature their ordeal is far more precarious.

It was no accident Hanelt and I found so many nematomorphs in a cattle trough earlier that day. (Nematomorphs are also known as horsehair worms, because ranchers will discover them wriggling in their waters.) Find a puddle or stream or even an abandoned cup in the hills of New Mexico and you’re almost sure to find the worms. And indeed, across the United States and all around the planet—over 300 nematomorph species tallied so far—people find them in dog bowls and, more troublingly, toilets. They’ll stomp on a cricket, pick it up with a tissue, toss it in the commode, and flush. Sometime later the worm will make its way back up the pipes and the poor homeowner will email Hanelt in a panic, thinking a human in the family is producing these things, when in fact that’s impossible—unless you’re a family of crickets. “I could have become a rich man by selling some sort of sugar pill,” Hanelt giggles. “Here, that’s a really bad parasite, take this. It’ll cost ya 400 bucks. It’ll cure you right away!”

What’s really happening is a zombie attack of global proportions. When a nematomorph gets into a cricket, the insect doesn’t act at all differently, even as the parasite feeds on its bodily fluids. Only when the worm grows to sexual maturity and decides it’s had enough of this place do problems arise. Somehow it convinces the cricket to leap into the peril of a stream or pond. Because once the worm makes up its mind to leave, it punches a hole in the cricket’s exoskeleton—peeking out just barely, but just enough—and in this way it can “taste” the water it seeks.

To test this, Hanelt came up with a brilliant experiment. He made cricket saline, mixing up a solution with the same salt content and chemicals that you’d find inside the insect, and dropped an infected cricket in. “The worms ultimately all came out very sluggishly,” Hanelt says. “But they never made it, because they thought they were still inside the chamber of the cricket.” But when he dropped this same cricket into regular old tap water, the worms in its belly tasted the difference and immediately erupted. And should you so desire, you can also go halfway and take a cricket and dunk it in water real quick. “If you then immediately pull it out, dab it off, the worms will go like spaghetti, shleeerp, straight back in,” Hanelt says. “Because it’s possible that the cricket is just moving around when it sprinkles or rains a little bit, and ultimately the worms need to have a mechanism to know that they’re deep in water.”

It’s at this point I remember that the trough we found was filled with dozens of worms, yet somehow no crickets. Hanelt assures me that even being exposed to such trauma, and even though the worm can make up half its weight, a cricket may survive and escape watery doom. The things survive fine in Hanelt’s lab, after all. In fact, even though crickets typically harbor one worm, Hanelt was once able to infect a single cricket with over 30, all of which erupted en masse without killing their host. (Which, depending on your perspective on mercy killings, either weakens or strengthens my argument that nature is cruel.)

But a lab is no forest. What happened to those crickets? Did they merely snap out of it and scurry out of the trough? Or did birds make off with them? I ask because, again, we can’t just consider our mind-controllers in a vacuum, but in a larger ecological context. Free meals of zombie cricket hordes could well transform how local birds structure their diets. And while no fish swam in that trough, for certain finned predators in certain river systems, kamikaze crickets make up a significant portion of their diet.

This is particularly true in Japan. Here, one study found that in five separate mountain stream systems, more than half of the trout population had crickets in their bellies—and crickets aren’t supposed to be in rivers unless something has told them to be there. In fact, in the fall, the trout catch more wormy crickets by mass than any other prey item. Meaning first of all, clearly Japan’s got a lot of little zombies hopping about. And two, these poor crickets are a tremendous resource for fish, to the point where the fish might require them to survive, like the Isle Royal wolves rely on worms to help bring down moose. So again, parasitic manipulations have consequences that ripple through the ecosystem.

Bring our view down from the macroscopic level to a microscopic one and we’ll find that nematomorphs live a lifestyle—past all the business about wriggling out of other creatures’ bodies—that couldn’t be more different from our own. It’s not just the brainwashing that’s so bizarre, but an overall existence of peril locked in the prison of another animal, one in which the worm has to somehow extract enough energy from its host to keep itself alive, yet not so much that it drops the cricket dead.

Adapted from PLIGHT OF THE LIVING DEAD by Matt Simon, published by Penguin Books, an imprint of Penguin Publishing Group, a division of Penguin Random House, LLC. Copyright © 2018 by Matthew Simon.