Killer Heat Waves Could Consume The Persian Gulf By 2100

It's not the heat, it's the humidity 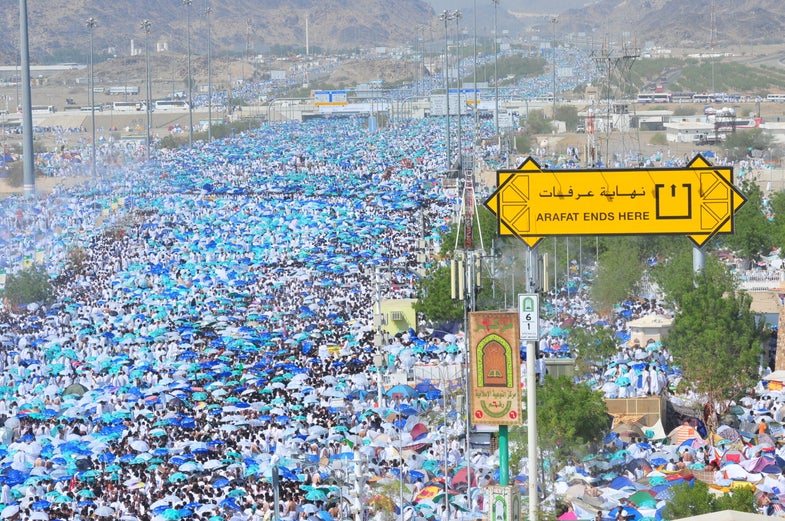 These pilgrims are completing the Hajj, a religious pilgrimage to holy sites in Saudi Arabia. Many pilgrims carry umbrellas to shield themselves from the heat. Al Jazeera English/Fadi El Binni/Flickr CC by SA 2.0
SHARE

Heat can be deadly. This year, over 1,000 people died in Pakistan as a stubborn heat wave gripped the country, and scorching temperatures prompted emergency measures in the Middle East. Unfortunately, it looks like there’s no cooldown in sight.

In a paper published this week in Nature Climate Change researchers found that in the next century, weather conditions in the countries bordering the Persian Gulf could reach absolutely deadly levels during the height of summer.

The researchers predict that average temperatures during the summer will continue to rise based on current climate change models, with some days reaching temperatures and humidity levels that are hazardous to even the healthiest human. Already, agencies like the Centers for Disease Control and Prevention warn that excessive heat is deadly to people like the very old, the very young, or those that are sick. Typically, healthy adults don’t have to worry as much, especially if they stay hydrated and can find an air conditioned shelter, but in certain conditions, everyone is at risk.

A heat index is what the heat feels like outside once humidity has been taken into account. In hot weather, people sweat to cool themselves off. Normally, sweat evaporating from the skin cools the body down. But in very humid conditions, the air is already saturated with moisture, and sweat can’t evaporate, causing people to overheat. When that heat index is over approximately 165 degrees Fahrenheit for an extended time, the paper predicts that even the most hardy humans could die of heat if outside for more than six hours.

Unfortunately, in some Gulf countries, average summer temperatures could approach that inhospitable number later this century.

This is of particular concern in Saudi Arabia, the site of the annual Islamic pilgrimage, the Hajj, where millions of pilgrims travel each year to participate in outdoor rituals. The Saudi Arabian government is already trying to combat the heat when the Hajj occurs in summer months by setting up cooling stations and giant umbrellas. But if things continue to get worse, they may have to take more drastic measures.

The authors write, “a plausible analogy of future climate for many locations in Southwest Asia is the current climate of the desert of Northern Afar on the African side of the Red Sea, a region with no permanent human settlements owing to its extreme climate.”

All of these assumptions are based on our continuing to burn fossil fuels at our current consumption level. One more reason to cheer on renewable energy.