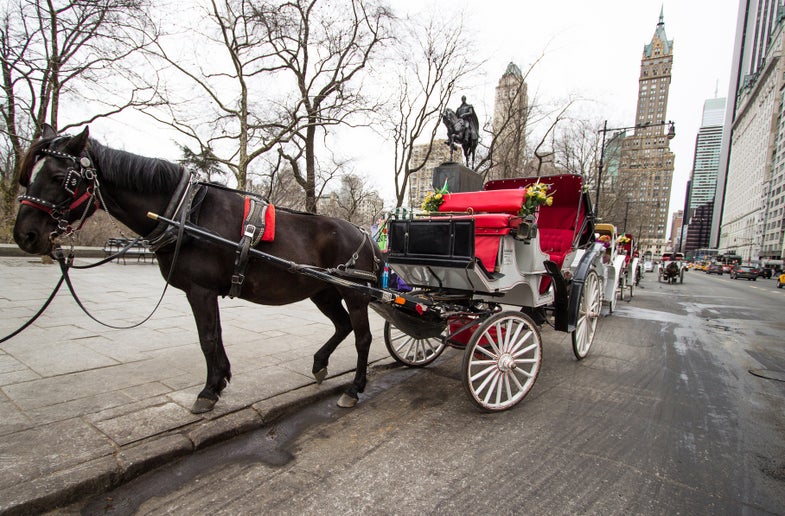 New York City Mayor Bill de Blasio has proposed a bill to City Council that calls for embedding all carriage horses with microchips and outfitting carriages with GPS devices. This move would help to ensure that horses could be identified and tracked, a response to claims from the anti-horse-carriage lobby that injured horses are being replaced with lookalikes to conceal evidence of abuse, according to the New York Times. It is unclear whether there have been documented instances of horse switching, or whether these concerns are speculative. The NYPD declined to comment when Popular Science reached out.

Implanting a horse with a microchip involves using a needle and syringe to shoot a rice-grain-sized device into a thick ligament that runs from the horse’s head to the shoulders. The chip, encased in biomedical glass, is usually implanted by a vet; the procedure is akin to giving the horse a vaccine.

Horses implanted with chips can be identified using a handheld microchip scanner. When held over the animal’s body, the scanner displays the ID number associated with the microchip.

John Wade, a veterinarian and owner of Microchip ID Systems, says that this is one of a limited number of ways to ensure horse identification. Other options include retinal scanning, which tends to be expensive, or tattooing the horse’s lips.

“It would probably be the most practical way to achieve the goal to be sure that people aren’t switching out horses,” Wade told Popular Science. “The lip tattoos, they just fade. And they’re not pleasant to do. And over time they’re just not as reliable as the chip.”

The chips, he says, have the added perk of nearly guaranteed permanence.

“It is not an easy task to remove a microchip, particularly in a horse,” says Wade. “It would be a surgical procedure that would require general anesthesia and something to help you locate the chip.”

This means that officials could make sure carriage horses are who their owners say they are. De Blasio’s original plan involved banning horse-drawn carriages altogether, but, in addition to the GPS devices and microchips, his new compromise also calls for eventually reducing the number of horses to 75 and confining horse carriage activity to Central Park.