‘Medieval Warm Period’ May Not Have Been So Warm After All 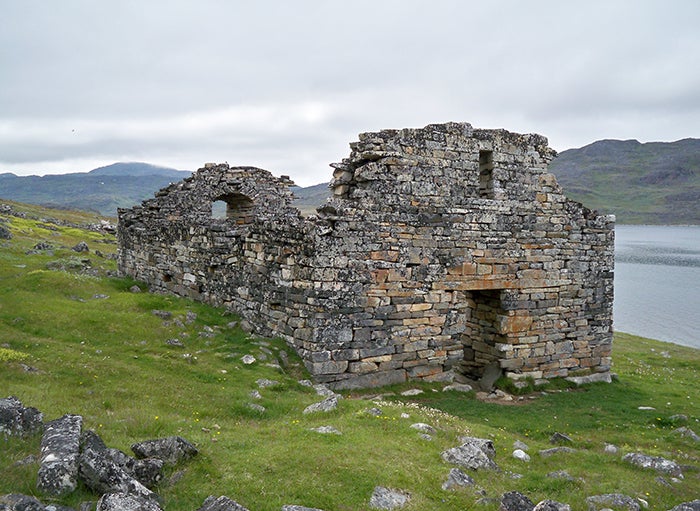 Historians and scientists have long asserted that the Viking explorers who left Iceland in the 10th century and came to rest in Greenland were only able to do so because of a stretch of abnormally warm temperatures that has come to be known as the Medieval Warm Period (MWP). But a new study of climatic conditions in Greenland during that time calls this warm period into question.

The current thought is that the mild climes of the MWP led the Vikings out to Greenland, and that the harsh cold climes of the “Little Ice Age” (LIA) drove them back to Iceland. Further, the MWP has also been a long time favorite tool of climate change deniers who use it to poke holes in legitimate climate science–as proof that there had been global periods of warmth before. According to the study, though, the Medieval Warm Period might not have been that warm at all—making the Vikings incredibly tough folks.

The so-called Medieval Warm Period started around 950 and lasted until 1350. During this time, Europe and much of the North Atlantic enjoyed exceptionally balmy weather. It was in the midst of this warm stretch that the Vikings, or Norse, who had by this time made it out to Iceland, set sail in their longships to settle on the coasts of Greenland and parts of Canada (ca. 985).

Almost 5,000 Norse settlers ended up living out their lives in this region hunting walrus for trade in ivory, and raising livestock. Already living there were the Inuits, the indigenous peoples of the arctic, whom they perhaps traded with. About 400 years later, the Norse disappeared from North America for reasons that remain unknown. Their disappearance is traced to roughly 1450, around the beginning of the “Little Ice Age,” so historians and scientists understandably surmised that the Norse were able to settle in Greenland because of the favorable temperatures of the MWP but then were forced out when temperatures dropped.

The problem with this view of the MWP is in how it has been applied to Norse history as well as to the global climate history of Earth. Nicolás Young, paleoclimatologist at Columbia University’s Lamont-Doherty Earth Observatory and lead author of the study, puts it quite bluntly: “The concept is Eurocentric—that’s where the best-known observations were made. Elsewhere, the climate might not have been the same.” And their research has shown that it most likely was not. 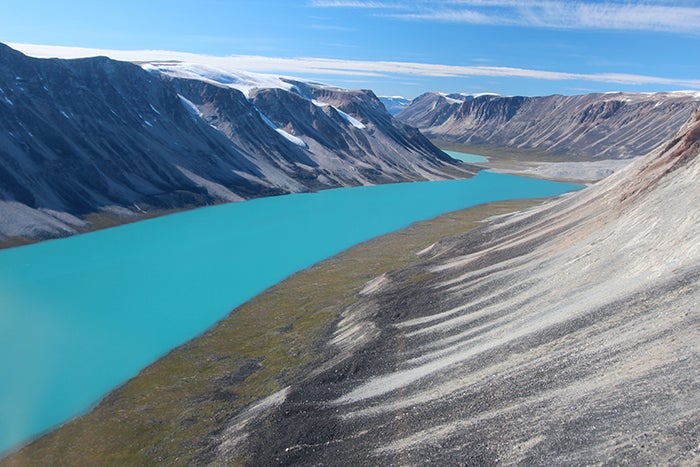 Small outlet glaciers in Western Greenland are retreating backwards from where they were when the Vikings arrived in the 10th century. Here meltwater has formed a lake.

Although most traces of where the glaciers resided during the Norse settlements have long been erased, Young and his team found moraines—boulders and other rocky debris piled up where the end of a glacier used to sit—in Western Greenland and on Baffin Island in Canada, both areas of Norse habitation. When the researchers took samples from the boulders, they found that the glaciers had reached positions seen in the Little Ice Age between 975 and 1275—long before the Little Ice Age had started. “The glaciers were large and quite healthy” notes Young, during the height of the apparently ‘warm’ Medieval period. 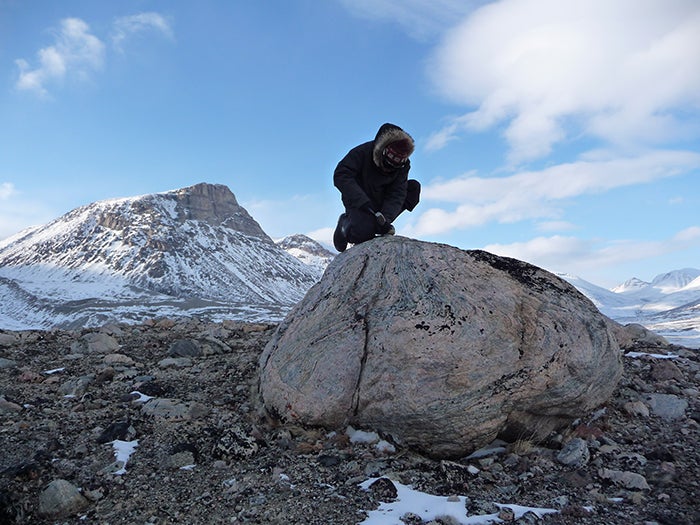 Jason Briner, a co-author of the study, samples a boulder left by a retreating glacier in Baffin Island, Canada.

The big takeaway is that at least this portion of North America was significantly colder than Europe was during the MWP and not really in a warm period of any kind at all. In fact, it was already cold when the Vikings arrived. “It’s becoming clearer that the Medieval Warm Period was patchy, not global,” remarked Young in a press release.

As for the Vikings, if cold weather wasn’t what drove them away from Greenland, then it’s possible a couple of different factors played a role: decline in walrus ivory, conflict with Inuits, soil erosion due to overgrazing by their livestock, or even migration back to Europe to farms depopulated by the Black Plague then raging in Europe.

Now not only have Young and his team added to the already mounting evidence that the warm-weather-happy-traveler theory about the Vikings is incorrect, they’ve—perhaps more importantly—also dealt a killing blow to the misrepresentation of the Medieval Warm Period as a global climatic event. Their study arrives atop heaps of other research that not only confirms this, but also suggests that as Europe warmed during this period, many other parts of the globe, including central Eurasia and Northwestern North America, actually cooled. The release of this paper is also particularly timely as global leaders and politicians try and chisel out a plan to tackle climate change.