The hybrid kids are alright. 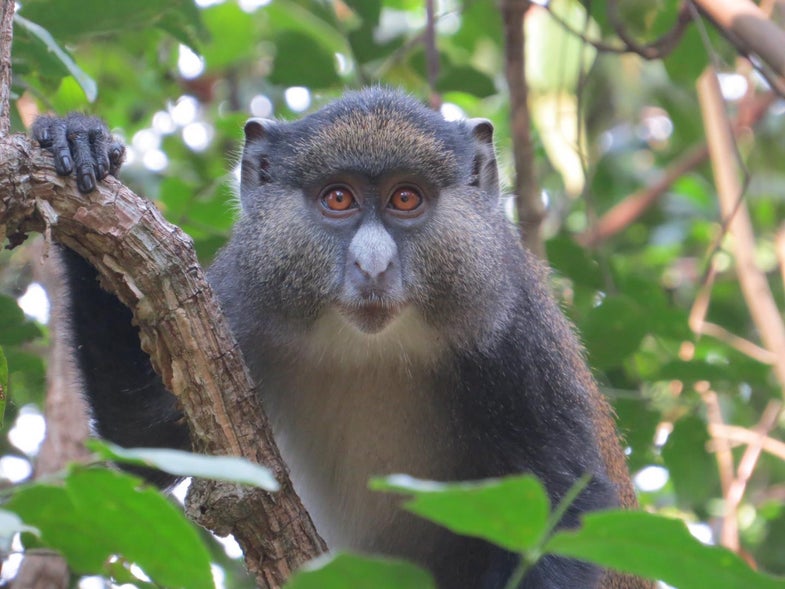 In 1994, when Kate Detwiler, then a junior in college, rode the bus to her research site in Gombe National Park, what she was going to observe wasn’t part of the mainstream scientific discourse. Chatting with other people on the bus, she says, she’d explain that she was going to observe hybrid guenons—offspring of male blue monkeys and female red-tailed monkeys. They weren’t so sure it was possible. But to Detwiler, the proof was right there in the monkeys’ distinctively-marked faces. But the proof was in the poop. Almost 25 years later, she’s the author of a new paper that offers genetic evidence of what she’s observed: in the Tanzanian national park made famous by Jane Goodall’s study of apes, two species of guenon monkey are able to interbreed and produce fertile hybrid offspring who live alongside—and sometimes interbreed with—red-tailed monkeys.

“It’s nature’s way of experimenting,” says Detwiler, now a professor in the anthropology department of Florida Atlantic University. In the course of her career there’s been a paradigm shift among those who study primates, especially biological anthropologists like Goodall and Detwiler herself. Hybridization is now understood as a mechanism by which primates sometimes further their species. In other words: yes, the monkeys are doing it, and they’re doing it a lot with a lot of different monkeys. In the case of the two species of guenon she studied here, similarities in terms of behavior and genetic compatibility allowed them to successfully mate and produce hybrid offspring. “Even the subtleties of mating signals are understood” between the species, she says.

As far back as the 1970s, hybrid guenons were being observed in the Gombe, but it wasn’t until recently that scientists like Detweiler were able to peer into their genes to see what was actually going on. Back in 1994, when she did an original research paper on these hybrids, it wasn’t possible to collect and sequence the DNA of many individuals in a wild population. Today, however, new molecular technologies make it possible for researchers to look beyond the physical characteristics of the animals they study for proof of how, and when, they interbreed.

On research trips, Detwiler had collected 230 poop samples, storing them in a special freezer. She ended up using 120 of those samples in this study. The job of collection is basically what it sounds like: collecting poop and documenting the monkey whose poop she believed it to be with photo, videos, and notes. The researcher then extracted DNA from the sample poop and further extracted the mitochondrial DNA, which are inherited from the monkey’s mother only. This gave her a clear picture of the mother’s species as well as the species of the monkey whose poop she was testing.

She found that there is a “hybrid zone” in the Gombe, where monkeys descended from blue monkey fathers, who left their place of birth in search of an appropriate mate, and red-tailed monkey mothers, who consented to have sex with the blue monkeys, flourish. Their genes show evidence of generations of interbreeding between the two species and the hybrids, and sometimes within the hybrids. They live alongside red-tailed monkeys, which are endemic to the park, and male blue monkeys, who moved in to the park in search of females to mate with.

Detwiler’s results run contrary to the established idea that hybrids are a dead-end and can’t reproduce: “These hybrids are growing up healthy,” she says. The male hybrids aren’t always able to reproduce, though all kinds of monkeys in the hybrid zone seem to have sex with one another—regardless of whether they’re blue, red-tailed, or hybrid. Detwiler speculates that this is because the hybrid males are only genomically compatible with certain females, not all of them.

These results come as no surprise to Mary Glenn, a biological anthropologist at Humboldt State University who has been studying guenons since the early 1990s. Glenn was not involved in the current research, though she did co-edit a 2006 book on guenons which included a paper on hybridization written by Detwiler. Glenn says this new study offers “proof that we were wrong” in thinking about species. “Her work kind of breaks the glass on… the flexibility of all species in terms of what can happen in nature,” she says.

In the past few decades our picture of evolution has become more complex, and scientists now recognize hybridization as a way for species that are genetically and socially compatible to perpetuate themselves. In this case, the blue monkey—which was previously not found in the Gombe—has been able to move in using this strategy of interbreeding. A bigger geographic spread usually means higher chances for species survival, even if other areas where a species lives are wiped out. It’s all about genetic continuity, and this particular case demonstrates that it’s harder than you’d think to even say what a species is.

For Detwiler, it’s proof that the Gombe has more secrets to tell. Gombe is an ecotone—a transitional area between two different biomes—and so a place of contact between species. That’s why it has fascinated scientists from Goodall to herself. “Gombe has given us so much information in terms of the chimpanzee behavior and humans’ place in nature,” she says. “I don’t think it’s an accident that the hybrids are there.” In fact, she thinks that male blue monkeys moving into the Gombe in the first place is likely the result of historical climate change. Studying them further may provide an example of how primates might adapt to our changing world today.