Virgin, GM and Rolls Royce Team Up to Go Green

Biofuels, efficient jets and hydrogen cars are among their green initiatives 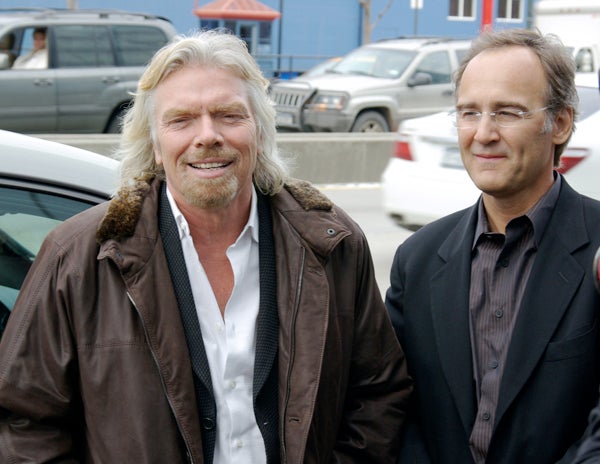 Yesterday morning Sir Richard Branson of Virgin Atlantic Airway pulled up to the IAC Building in a hydrogen fuel-cell-powered Chevy Equinox SUV. There he was joined by executives from GM and Rolls Royce to announce a smorgasbord of environmental initiatives. A clear theme was hard to distinguish, other than the color green.

For starters, Branson reflected on last week’s succesful test flight of a Virgin airliner burning a mixture of standard jet fuel and 20 percent biofuel—the first flight ever of an airliner running on fuel derived from plants, said Branson. (Though other types of jets have flown before on biofuel.) 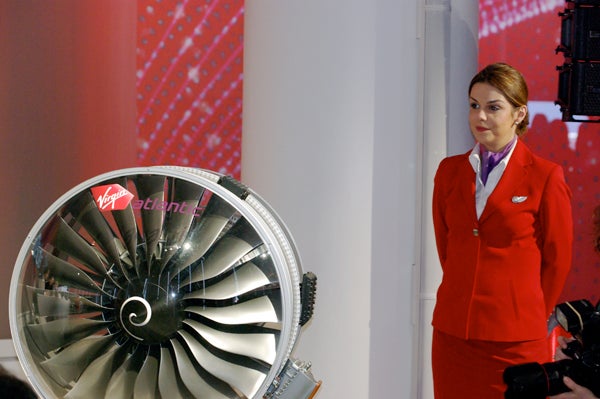 In addition, he announced a $2.6 billion deal with Rolls Royce to purchase ultra-efficient jet engines to power a new fleet of Boeing 787 Dreamliners—a plane already lauded for its energy efficiency. James M. Guyette, CEO of Rolls Royce US explained that jet engines have become 70 percent more efficient over the past half-century. The company’s latest engines, he said improve another 30 percent over the previous generation.

Those new engines will be burning standard jet fuel, not biofuel. However, Guyette said that Rolls Royce is testing its engines with biofuels. And Virgin has its own fuels company, the Virgin Green Fund, working on technologies to mass-produce biofuels. Branson is especially optimistic about using algae to generate the fuel.

While Rolls Royce announced air initiatives, Virgin’s partnership with GM stayed grounded in automobiles. Virgin’s first-class customers probably aren’t used to riding in Chevys, but they will get the opportunity in a few months, when Virgin rolls three hydrogen-powered Chevy Equinox SUVs into both its LAX and JFK airport services. Dr. Larry Burns, GM’s Vice President of Advanced Propulsion, attended the press conference with Branson to make the announcement. The six Equinoxes are part of some 100 cars that GM will ultimately roll out for Project Driveway, the largest-ever real-world test of fuel cell vehicles. About 40 of the cars have been delivered so far, said GM spokesperson Johan Willems. (All the cars so far are in the U.S., but GM will also deploy some vehicles in Germany, Japan and Korea later this year, said Willems.)

Many of the vehicles go to “ordinary citizens” who applied for the opportunity to drive the cars for a three-month stint, on GM’s dime. One of them, Eric Rotbard, attended the event and was beaming with praise for the new car he had just picked up last Thursday. Even on a bitter cold day, he said, the Equinox started up in 35 seconds. “I wait five minutes in my car,” said Rotbard, speaking of his Camaro. 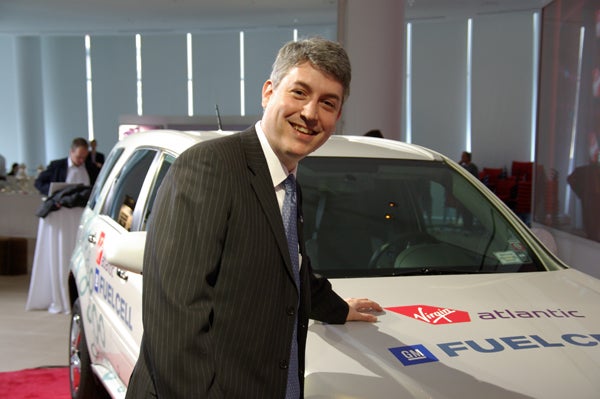 Eric Rotbard with a hydrogen-powered Chevy Equinox just like the model he’ll be driving for the next three months.

Rotbard is proof that tenacity pays off. He first learned about Project Driveway about two years ago when he read an interview with Dr. Burns. The he started sleuthing. He figured New York City would be one of the metropolitan areas for the trial (LA and Washington DC are the others). Then he carefully watched public records related to permitting and zoning to see if any gas station near him was intending to install a hydrogen filling station.

An attempt was made in the city of Tarrytown, but was derailed by public opposition out of safety fears, which Rotbard finds irrational. “The public needs to understand that hydrogen is not intrinsically unsafe,” he said. “When the engineers started taking their kids in the car, I knew there was no problem.”

Finally, a Shell station in White Plains got approval to add a hydrogen pump. Rotbard, who works nearby, applied to Project Driveway and was in the first wave of testers accepted.

GM has shown that Hydrogen cars work. But they still have to get a hydrogen fueling system to work. GM’s Burns estimates that a city the size of LA would only need between 50 and 80 stations to make hydrogen viable—enough to service the city and also trips to popular nearby destinations such as Las Vegas and Palm Springs. Burns said that GM will work with LA, or any other city, that will fund the building of such a hydrogen-fueling network.

He didn’t confirm whether the automaker has had an takers, but he did that the company hopes to start selling hydrogen-powered cars to the public as early as 2011. In any event, clearly Branson is already a fan.