FYI: What Do Dolphins and Rodeo Bulls Have in Common?

Our absurd-but-useful comparison of the month 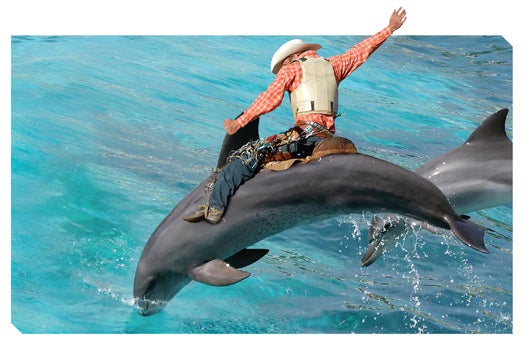 All vertebrates have tiny structures called semicircular canals inside their ear that help them to maintain balance even when their heads are bobbing around vigorously. That’s why rodeo bulls can buck wildly and not fall over.

The rule of thumb is that the greater the ratio of canal size to body weight, the more agile the beast. But that rule doesn’t seem to hold for dolphins and whales: A bottlenose dolphin’s canals are the same size as a mouse’s. “Some people thought that, because there’s nothing to bump into in the ocean, dolphins could get by with small canals,” says Timothy Hullar, a (human) ear specialist at Washington University in St. Louis. “But dolphins are acrobatic swimmers—they can do barrel rolls and flips!—so there must be another explanation.”

First, Hullar measured how much dolphins jerk their heads around by packing a sensor that records three-dimensional rotation in a waterproof tube and getting dolphins to swim around with it. “I didn’t invent the sensor, but I figured out how to get a dolphin to keep it in his mouth,” he says. “It took a lot of reward fish.” He then analyzed the motions of a rodeo bull, which is just as active and similarly sized but has much larger canals than a dolphin. Hullar duct-taped the tube to a bull’s horns and let it buck.

The device recorded similar head movements for bulls and dolphins, suggesting that dolphins’ canals are either more efficient or that they maintain balance through some other mechanism. Hullar thinks dolphins and whales may receive more sensation through their skin than other animals, and that those sensations supplement the cues from their canals. “If the animal feels water flowing over its body from left to right, maybe it can make the conclusion that it’s turning left,” he says.

Learning how dolphins keep their head on straight, Hullar says, could help humans suffering from loss of function in the inner ear, a crippling affliction. “If dolphins can enhance their sense of balance with their sense of touch, we might be able to help these patients by stimulating another sensory input,” he says. “It would be really neat if this is how we figured that out.”

Animals
Ask Us Anything
June 2010