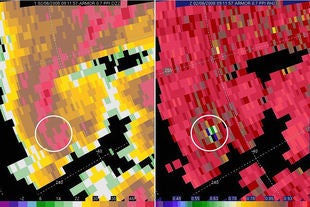 In the aftermath of the Feb. 6 tornado, scientists at The University of Alabama, Huntsville have been analyzing radar images of the event, searching for signs that might help them issue faster warnings in the future. The radar signature from debris sucked up into the air is so distinctive that the group thinks it may be able to develop an automated detection system. Essentially, they’d program computers to automatically pick out these signs in the data, and raise a flag immediately.

The system would probably only apply to large tornadoes, or mesocyclones, so it wouldn’t necessarily deliver the first warning to people on the ground. But it would give scientists better information on the location of the twister, and add more precision to the warnings.