Why Don’t I Ever See Baby Pigeons?

Hint: It's not because they don't exist 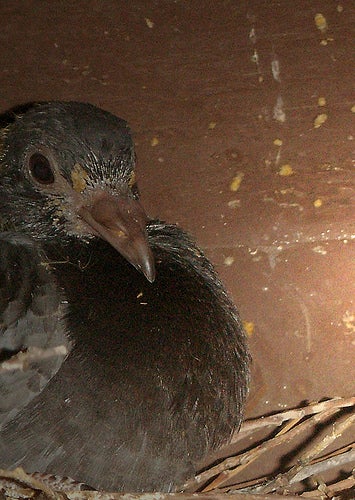 Run-of-the-mill city pigeons, known as rock doves, build their nests in the nooks and crannies of the concrete cityscape, reminiscent of their native European and Middle Eastern cliffside habitats. Parents typically keep babies, or squabs, hidden and safe until they can survive on their own, usually a month after hatching.

As a result, youngsters are almost fully grown and their feather coloring looks nearly identical to an adult’s by the time they fly the coop, says Karen Purcell, who leads Cornell University’s Project PigeonWatch, a grassroots study of feather colorings.

(Check out the video of a fluffy yellow pigeon emerging from its egg on the project’s Web site, pigeonwatch.org.)

Purcell suggests a few tricks for spotting the younger birds among the masses. Pigeons have grayish-brown eyes for the first six months of their life, after which they turn orange or red. And the bit of flesh above a pigeon’s beak, the cere, is gray when the bird is younger, instead of white. You can also identify juveniles by their behavior, Purcell says—although it’s hard to tell which birds are acting immature when all of them are pooping on statues.