Take one laser cutter, a few dozen paper aliens, and a dash of know-how 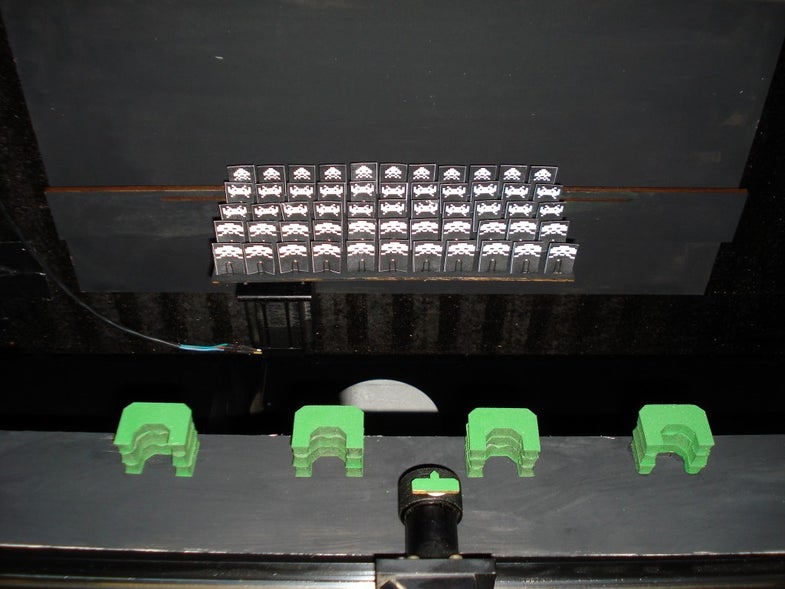 Sometimes when all you have is an industrial laser cutter, everything looks like an opportunity to create a real-life version of Space Invaders.

Martin Raynsford, co-founder of laser-cutter purveyor Just Add Sharks, combined one of the company’s Whitetooth A1 cutters–which features an 80-watt laser tube–with an array of advancing paper space aliens, in order to mimic the 1978 arcade classic. In the original game, you control a horizontally sliding laser cannon and attempt to shoot down hordes of invading extraterrestrials, who slowly advance upon you and try to shoot you in return. With Raynsford’s real-life version, a player simply controls the laser cutter via laptop keys, and a webcam allows them watch as their “space gun” burns the invading paper menace as they march closer and closer, thanks to a moving platform built on a modified rotary attachment.

The project took a few months to design, but only a week or so for Raynsford to build. (To be fair, he already had access to the laser cutter.) The truly dedicated can use his DIY instructions to construct their own version of the real-life game. He even offers his quick-and-dirty software for free, but you’ll have to find your own laser cutter. You can see a video of the whole game along with Raynsford’s behind-the-scenes construction information in the video below.

The only major limitation of this version of the game is that the invading aliens are pacifists: They can’t shoot at the player. So while Raynsford used foam to recreate the shields from the original arcade game, they’re less useful here–although your laser can shoot through them after the first shot. Raynsford says he considered adding a rotating mirror at the back that would have reflected the laser fire back at the player, but decided “I like my eyes a bit too much.” Aw, come on: What’s a little risk when it comes to science?!