First came dark matter, the gravitational source from within our galaxy that astronomers couldn’t see. Then came dark energy, the... 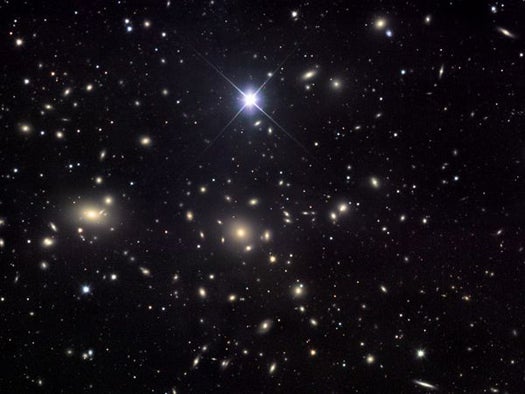 First came dark matter, the gravitational source from within our galaxy that astronomers couldn’t see. Then came dark energy, the undetectable force pushing the expansion of the universe. Now, NASA scientists believe they have confirmed a new player, dubbed “dark flow,” that is dragging hundreds of galaxies along the same path. Even stranger, the researchers believe that dark flow is actually the gravitational pull from matter beyond the edge of the known universe.

The NASA scientists first discovered dark flow in 2008, when they observed numerous galaxy clusters speeding off at 2.2 million miles per hour in the same direction. The results were controversial, so the researchers spent another two years collecting data. The new observations further codified the discovery. According to the new study, which looked at 1,400 galaxy clusters, the pull of dark flow extends out from Earth at least 2.5 billion light years.

What exactly is pulling these galaxies remains to be seen, but the NASA team believes that dark flow is actually the gravitational pull of massive objects beyond the edge of the known universe. Interestingly, the idea of matter beyond the edge of the universe doesn’t violate any laws of physics. According to physicist Leonard Susskind, who was not involved with this study, the boundary of the known universe is not a wall past which nothing can exist, but simply the farthest point from which light has reached Earth. Past that, there may very well be massive objects. But since the universe is expanding, their light will never reach us, and thus we cannot observe them along the electromagnetic spectrum.