Try this to trigger one of the cutest reflexes around. Just blow into a baby’s face and watch him or... 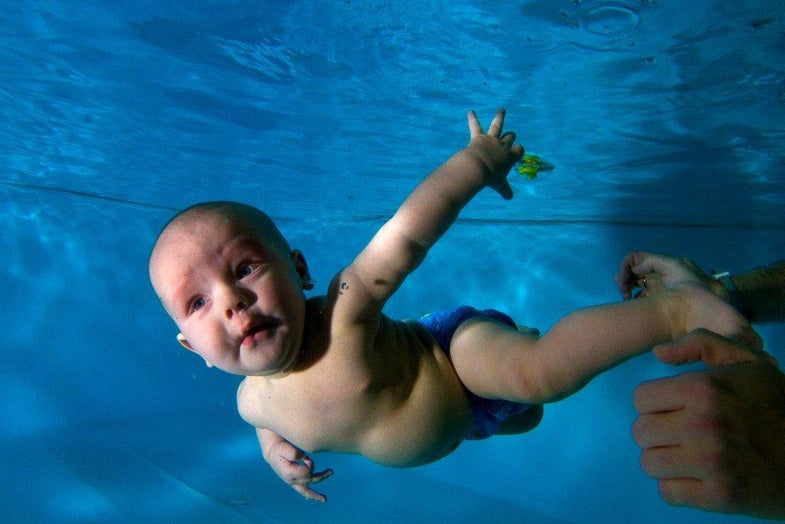 Try this to trigger one of the cutest reflexes around. Just blow into a baby’s face and watch him or her gulp air, close eyes, and stop whatever they’re doing. Parents have used this as a way to get their little ones to stop crying – but it’s also the path to swimming.

The response is what’s known as the bradycardic reflex, which is part of the mammalian diving reflex. When the face of an infant is exposed to cold water, the heart slows down and blood is shifted away from the peripheral muscles to conserve oxygen for the brain and heart, and they typically hold their breath. The reflex is the same one that protects babies from getting milk in their lungs, says Goren Wennergren, a pediatrician and professor at the University of Gothenburg, Sweden.

“It’s interesting that the reflex kind of reroutes the entire circulatory system to save blood for the heart and brain, and not pump it through the rest of the body,” says Wennergren.

Wennergren had heard that after 6 months of age, this reflex fades away – so he decided to look into the function of the diving response in babies of different ages. Along with a graduate student, he studied 36 infants in swimming classes at warm pool – one of the few actual studies into diving babies. They monitored the babies’ heart rates, breathing and watched their behavior during their underwater dives, which lasted a few seconds.

Not only did the babies hold their breath, but they seemed to enjoy the experiment. The researchers found that the diving reflex still exists in older babies (they tested babies up to 1 year old) but that it decreased in older infants. The babies all held their breath, and it took about 10 seconds after the dive was over for their breathing to return to normal. Wennergren noted that the babies seemed eager to dive, and the ones with diving experience prepped by closing their eyes before being submerged. His study was published in 2002 in the journal Acta Paediatrica.

“In diving animals, the reflex persists for their whole life,” Wennergren told KinderLab, noting that adult humans also have the same reflex – if you dunk your face in cold water, you’ll gasp and hold your breath.

But the ability to hold breath doesn’t mean that babies can swim safely. Clay Jones writes in a blog post for Science-based medicine. “I don’t agree with shoving young infants underwater and I don’t think that efforts to teach toddlers to float or kick to a wall are enough. And they might give a false sense of security,” Jones, a pediatrician in Newton, Massachusetts, told KinderLab. He points out that drowning is the second-most common cause of injury related death overall through 18 years of life, killing about a thousand kids each year in the United States.

“Water safety classes that might also involve some time in the pool with a parent are fine. Once developmentally ready, usually around 3-4 years, swimming lessons are very important,” Jones adds.