Weird winter weather has scientists looking to the north pole

Temperatures in the Arctic could help drive extreme weather in the United States. 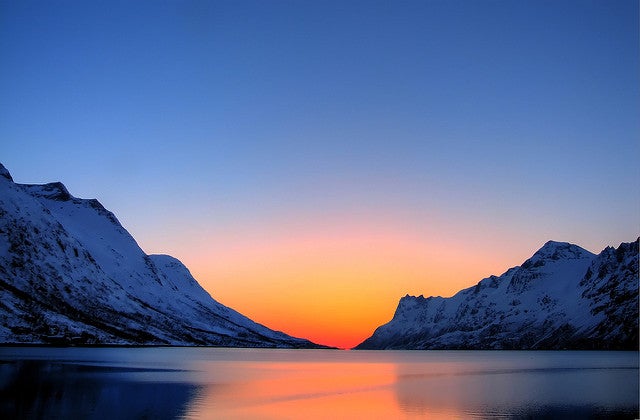 Last October, experts at the National Oceanic and Atmospheric Administration predicted a fairly mild winter for the United States. Though they were careful to hedge their bets (“maps show only the most likely outcome,” NOAA warned, “but this is not the only possible outcome”), models suggested a weak La Niña would bring slightly colder than average temperatures to the northwest, with slightly warmer than average temperatures cropping up in the south and east.

But this winter, as anyone with a TV—or window—knows, appears to have turned out rather differently. The northeast has experienced three back-to-back-to-back storms. We rang in the New Year with a so-called “bomb cyclone” and, for one day only, it was colder in Florida than in Alaska. This weird weather wasn’t confined to the eastern seaboard, either. Seattle and other communities in the Pacific Northwest saw unusual snowfall in November, December, and February. Last month, Europe got colder than the north pole, allowing the residents of Rome to toss a few snowballs.

Meteorologists have offered solid analyses of each passing storm, but scientists are still trying to determine what larger forces are at work. In a paper published Tuesday in the journal Nature Communications, MIT climatologist Judah Cohen has a controversial message for all of them: it’s the Arctic, stupid.

By evaluating two indices—the polar cap geopotential height anomaly index and the polar cap air temperature anomaly index—and comparing them to real-life weather as measured by the Accumulated Winter Season Severity Index, Cohen’s team was able to show that severe winter weather in the United States is often tied to (relatively) high heat in the North Pole. “If the Arctic is cold, that favors less severe winter in the eastern U.S.,” he says. “When the Arctic is warm, it’s the opposite relationship. A warmer Arctic favors colder temperatures in the eastern U.S. and heavier snowfall.”

The idea that a warming planet can create more extreme winters may seem counterintuitive. (In the paper, Cohen and his co-authors themselves acknowledge this, calling the phenomenon “surprising.”) But “it’s not some random chaotic mess,” Cohen says. “There’s physical, mechanistic cause.” Specifically, the phenomenon known as Arctic amplification.

Average global temperatures, as you’ve probably heard, are rising fast. In 2016, the average surface temperature of Earth’s land and water hit 68.96 degrees, up 1.69 degrees from the global average seen in the 20th century. But in the Arctic, things are warming up even faster. When Arctic sea ice melts (as it inevitably does when the planet heats up), that bright, cool, sun-reflecting surface disappears with it. In its stead, one finds a dark, heat-absorbing ocean. Essentially, the Arctic has more to lose, so it’s losing its chill faster. That’s why the Arctic clocked in around 14 degrees warmer than normal this winter.

Unlike Vegas, what happens in the Arctic most definitely does not stay in the Arctic. Cohen’s latest research suggests that when pressure changes push cold air out of the pole, it increases the probability for extreme weather in the eastern United States. While correlation certainly doesn’t equal causation, Cohen nonetheless felt emboldened enough to write, “This finding suggests that Arctic variability has a stronger influence on severe winter weather events than does [El Niño-Southern Oscillation] variability.”

This statement, at first glance, is nothing to blink at. For most people, it’s satisfying just to know a little more about the weather and what could be driving it. But for Cohen, demonstrating this relationship between Arctic warming and North American weather feels paradigm-shifting. For years, he has been fighting what he perceives to be an over-reliance on the El Niño-Southern Oscillation model, also called ENSO. First observed in 1897, ENSO describes a phenomenon whereby variations in winds and sea surface temperatures over the Pacific Ocean affect the climate observed in the tropics and subtropics. When the sea temperature warms, its effects are called the El Niño phase; when ocean temperatures drop, we experience La Niña.

For the last century or so, ENSO has been a fairly accurate (and readily applied) explanation for much of the weather we see on this world. But, Cohen says, it can’t explain everything, no matter how bad some people want it to. “I’m always, if I can find a way, [trying] to stick it to ENSO,” he says. “When I came into the field, it was all ENSO all the time. In some ways, it still is. It’s the only thing people focus on. I do think ENSO is important, but it’s been overemphasized.”

Many of Cohen’s fellow climatologists remain skeptical, however. Like most studies based on observation, Cohen’s paper is far from air tight. It shows some relationship between Arctic variability and extreme weather in the northeast, but experts disagree over whether the relationship is strong enough to warrant consideration. What’s more, because observational studies like this rarely provide insight into the “why” of a given weather event, some researchers argue the U.S. may actually influence the Arctic instead of the other way around. Still other experts argue that this debate is largely beside the point, given that despite the occasional polar blast, the northeast is still getting steadily warmer over time.

But one thing is certain: The Arctic is getting more attention than ever. “Twenty years ago, no one was looking at the Arctic to see how it might impact our weather,” Cohen says. “We used to go, ‘Oh, we don’t need to look at the Arctic, it’s so cold.’” But extreme weather events like the 2017-2018 winter have helped change that. “Just using ENSO, we can’t understand [this winter],” Cohen says. “Typically, [ENSO] is stuck in the same phase the entire winter. Meanwhile, the polar vortex is going through very dramatic changes.” As extreme weather continues apace, we’re likely to see more storms—in both our climate and our climate research labs.