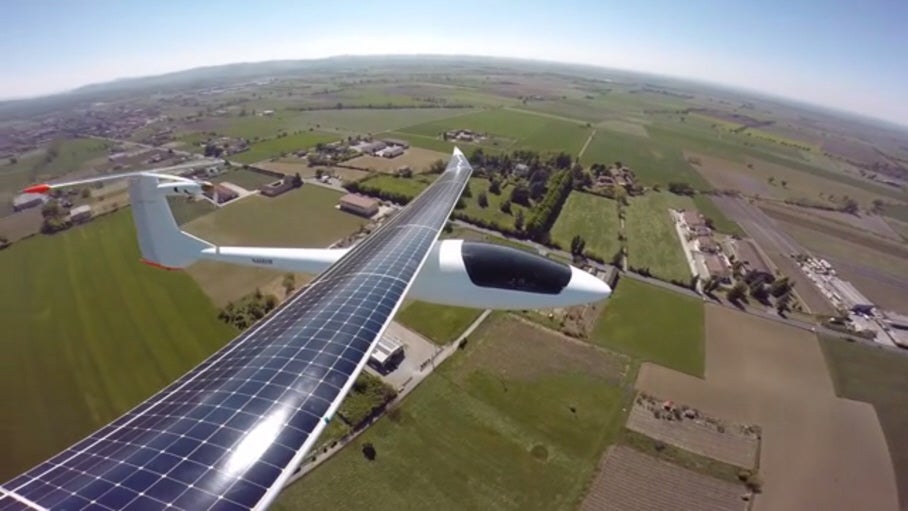 Airplane wings are broad, flat surfaces that almost always face the sky, which means they are ideal mounts for solar panels. Built by Solar Flight, a team of European engineers, the Sunseeker Duo is a two-seater airplane that flies purely by solar power. On December 17, 2013, it completed its first flight powered solely by its own battery. Earlier today, Solar Flight released video of that flight.

The airplane has the lithe profile and shape more commonly associated with an unpowered glider, and for good reason. It’s the latest prototype in a long line of exclusively solar powered airplanes, all descended from gliders. The very first Sunseeker flew across the U.S. in 1990, and every evolution of the design has retained good gliding ability. As seen in the footage of the flight over the countryside outside of Milan, once the pilot reached a comfortable altitude they were able to turn off the engine and continue gliding, before landing comfortably on the ground.

The Sunseeker Duo’s propeller is located on the tail behind the wing, and when the plane switches to gliding the propeller blades fold back until they are flush with the engine, minimizing drag. It also has a tricycle arrangement of three landing gear, which fold compact inside the body.