Coasting through the midair transition trials 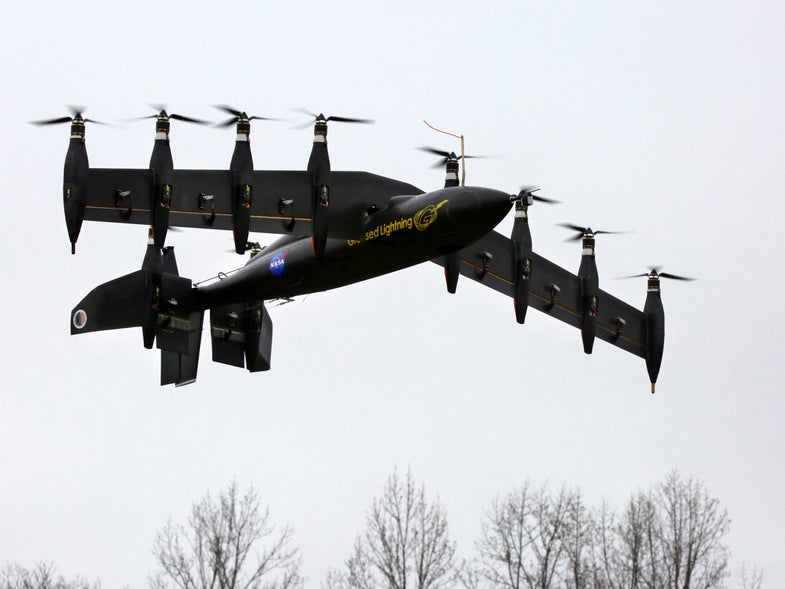 This is no garage-built hotrod. NASA’s Greased Lightning, a 10-engine tilt-wing airplane, successfully completed a mid-air switcheroo from vertical, helicopter-like takeoff to level, airplane-like flight, and then back to vertical for the landing. It’s as systematic, hydromatic, and ultramatic as a tilt-wing drone can get.

Tilt-wing aircraft, like their similar tilt-rotor brethren, combine the helicopter’s ability to hover, land, and take off from almost anywhere with the flight speed and efficiency of an airplane. Unlike tilt-rotors, where the engine is what shifts, in tilt-wings it’s the whole wing that transitions between horizontal and vertical. Previously, Greased Lightning tested vertical takeoff, but it wasn’t until tests this spring that the plane transitioned from vertical to horizontal in mid-air.

Greased Lightning has a 10-foot wingspan, and is part of NASA’s ongoing aeronautics mission. The current version, labeled GL-10, is a scaled-down prototype of what could be a larger, and possibly manned, aircraft. In a press release, aerospace engineer Bill Fredericks said NASA is pursuing several potential uses for the aircraft.

All ten of Greased Lightning’s engines, including the four on each wing and the two on the tail, are electric, so the plane is a lot quieter than expected for a ten-engine craft. Watch the flight below: