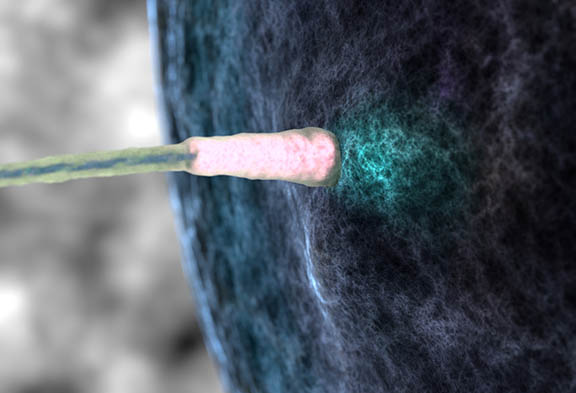 When Charles Reilly and Donald Ingber set out to make their short film—In the Beginning, an homage of sorts to Star Wars that (spoilers) tells the tale of a single sperm’s triumph in a literal life or death race to fertilize an egg—they had just one goal.

Ingber, the founding director of the Wyss Institute for Biologically Inspired Engineering at Harvard University, and Reilly, a biochemistry researcher also at the Wyss Institute, wanted the animated film to be scientifically accurate. To achieve this, the two reached for techniques more common to the silver screen than the lab. They sought digital imaging software ordinarily used by video game designers and film animators.

Not only did they achieve cinematic glory, but by reaching far outside the scientific silo they were able to happen upon a new discovery: an understanding of the molecular-level mechanics that let a sperm whip its tail back and forth to fuel its need for speed. The results were published today in the journal ACS Nano

Ingber and Reilly aren’t novices when it comes to letting art inform their science. A chance encounter with a sculpture that came out of Buckminster Fuller’s architectural world back when Ingber was in grad school led to his theory that tensegrity, the tension that gives Buckminster Fuller’s seminal geodesic dome both its lightness and strength, applied not just to building structures or bodies but also to molecular structures.

“Most man-made structures depend on gravity, like the weight of one brick weighing on the other,” says Ingber. “Think of Stonehenge: the stones hold themselves in a steady form because of gravity—one compressing the other. But if you hit it from the side it falls like dominoes.”

Tensegrity, in comparison, depends on continuous tension rather than continuous compression. That’s how human bodies are built. We have compression-resistant bones pulled up by a series of muscles, tendons and ligaments. This allows us to walk around and not topple over the second we’re brushed from the side. That brush with Bucky Fuller’s work led Ingber to see that cells have a cytoskeleton (literally a cell skeleton) that works similarly. Cells have compression microtubules—the equivalent, loosely speaking, of our bones—with tensile lactomycin filaments that act kind of like our tendons. The tension in those filaments determine the shape and stiffness of the cell.

That formative experience likely primed Ingber to be receptive when Reilly first reached out. Reilly is a molecular biophysicist, but before he got his PhD he worked at Park Road Post, director Peter Jackson’s post-production film studio. It’s responsible for, among other things, effects work on The Lord of the Rings, King Kong, and Pete’s Dragon. When Reilly left the film industry for science, he continued honing his digital animation skills on the side. Reilly reached out because he felt animation could be better leveraged to help the public understand science.

Both researchers felt that what was missing from most depictions of the cellular and molecular world was believability. The ways in which we portray the cellular world and the bigger biological world are often disconnected—it’s hard to visualize the connections between the cells that make up the human liver and the liver itself, for example. It’s even harder to conceptualize how the liver connects to the human body, and how that human body connects to its broader ecosystems. They hoped that by improving those depictions using software commonly used in making Hollywood blockbusters, they wouldn’t just help the public better understand those kinds of scientific connections—but actually advance science as well. In the Beginning was just a proof of concept, but one that far exceeded expectations.

If it seems weird that digital animation and effects software could advance scientific research, you probably don’t realize how much physics goes into your standard Pixar movie.

Human vision is far from flawless. But while we’re often fooled by Photoshop—and the way our brain fills in visual information can lead to all sorts of mind trips—when we’re watching the way a thing moves on screen, we have a knack for detecting when the motion is just off. If the movement isn’t quite right, or the light reflecting off a surface doesn’t look realistic enough, we enter into what the Japanese roboticist Masahiro Mori calls the uncanny valley. Things that look almost-but-not-quite real generally freak us out, and we tend to turn away—pretty much the opposite of what you want people doing while watching your movie.

SideFx makes a visual effects and 3D animation tool called Houdini, which is what Ingber and Reilly used to make In the Beginning. You can thank Houdini for the oceans in Moana, the explosions, fire, and mist in Game of Thrones, and Ego’s palace in Guardians of the Galaxy 2, along with a whole suite of games, since they work closely with companies like Electronic Arts (EA).

Reilly likens Houdini to a visual programming language. Users are able to use intuition—the way you would with any traditional visual editing software—but instead of a paint brush, you use mathematical operations and rules to explore artistically. The same physical principles that inform scientific modeling software are baked into Houdini. But because scientific models are highly focused on accuracy, they can be very slow. Houdini puts a slightly higher premium on speed; it makes simulations accurate enough to avoid the uncanny valley, but allows for reasonably fast prototyping.

“It allows you to leave something in there that’s good enough, but you know where you’ve colored outside the line,” says Reilly. “Then you can always go back and revisit that if you want, but it might turn out that you don’t need to revisit it. And you didn’t waste two weeks’ time to model it.”

That fluidity is especially important for modeling biological systems, because the experimental data is imprecise enough that conventional engineering software doesn’t always fit it. Houdini allowed the researchers to apply different kinds of weightings to different data sets, so they could mix and match and explore intuitively.

Instead of x-wing Starfighters opening fire on the Death Star, Ingber and Reilly picked sperm targeting a different sort of thermal exhaust port—racing to fertilize an egg. Critical to their film was accurately depicting the sperm’s tail, called an axoneme, a tube made up of nine pairs of microtubules arranged in a column around a long central pair. Animating it properly meant maintaining an accurate biological model all the way down to the atomic level.

Molecular dynamics, says Ingber, uses one of two methods to predict molecular changes in shape or function. Scientists can make the molecule rigid—essentially freeze it in place—even though molecules are always vibrating and experiencing flexibility and different shapes. This gives you really high resolution, like a snapshot of a person, but you can’t tell if the person is dancing or falling. Or they use Cryo-electro microscopy, a technique that just won the Nobel Prize. That shows the molecules in all their shaking, shimmying and undulating glory, but with relatively low resolution.

Ordinarily, there wouldn’t be an easy way to resolve these disparate types of information; it’s like reading an iOS emoji on an Android device. But the animation software technique allowed Ingber and Reilly to build the model at different scales at the same time, modify until the pieces fit together, and then check back with the data to make sure it fit. It’s sort of like assembling a puzzle with only a piece of the picture: it might take more trial and error than usual, but past a certain point there’s only one way the puzzle can fit together based on the data that you do have. The ability to move between scales is what enabled the researchers to get new insight into how the molecular motors, called dynein, drive motion inside the sperm tail.

The dynein proteins are attached along the microtubules. Dynein changes form when a molecule called adenosine tri-phosphate (ATP) converts to adenosine diphosphate (ADP) at a specific binding site on the protein, which releases energy as a chemical bond breaks. When that happens, the way in which dynein changes shape causes it to essentially grab the microtubule or exert force on it, which in turn makes the sperm tail bend and move. If dynein is the engine, then ATP is the gasoline. Dynein switches back when new ATP binds to the site, leading to the sort of wriggling motion sperm are known for. The researchers were able to visualize how rows of dyneins work in unison, like rowers pulling together in a boat.

It’s this kind of insight that wouldn’t have been possible without modeling meant for the movies.

Moving beyond the silos

SideFX wasn’t directly involved in the study that utilized its software, but Moore was thrilled to hear about the work. “I’m happy to hear that it’s starting to happen, that there are more people talking from these different silos that otherwise that don’t talk very often,” he says. “That’s what blows me away. There’s so much potential there.”

And he isn’t the only one to think this way.

Reilly believes their biggest achievement rests not in solving the sperm motility riddle, but in how they solved it—by borrowing assets and tools from different disciplines. He sees boundless opportunities for overlap between the scientific and entertainment fields in terms of studying drug development and disease modeling.

“Imagine there was a sci-fi movie, and we wanted images of some virus in that movie,” says Reilly. The filmmakers could collaborate with researchers to model the virus. The movie would wind up with incredibly accurate virus representations, while the scientists could actually learn about the virus in the process.

“There’s a lot of work in there, a lot of meetings crossing the art scientist interface. Often it’s artists trying to understand what’s going on in science so they can convey things to the public,” echoes Ingber. “Usually scientists kind of look down on that, because it doesn’t really help them advance science. Here’s a case where advancement in the arts, in this case entertainment, can actually advance the scientific process—and I think that’s what we’re so excited about.”

So the next time you’re watching a summer blockbuster full of digitally animated effects, ask yourself how much cooler it would be if the flick had helped scientists figure out how to fight off a deadly disease.